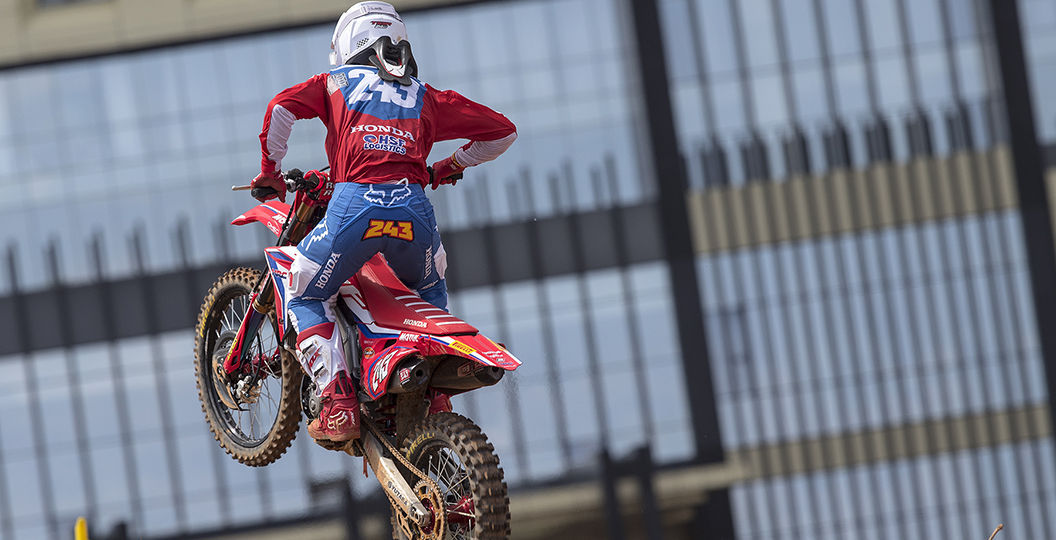 The Grand Prix of Indonesia marked the sixth round in a row that Tim Gajser has won, but this one was a little different. Gajser rode well within himself to control the first moto, which shows just how far he has come, but then faltered in the second encounter and had to give up a moto win for the first time since the opening race in Latvia three weeks ago. The day was still extremely positive, as he upped his advantage in the standings to one hundred and thirty-three points.

MX Vice: Another overall win. Not a 1-1 this time, but it is still okay. In the second moto there was a little mistake again, but it’s good. Championship lead is over a hundred now. It’s all good, but I guess you are a bit disappointed about the second one.

Tim Gajser: Yeah. Actually, I am really happy how both days went. In the second one I had a holeshot and I already made a little gap, around three seconds, but then I made a mistake. I tried to regroup as soon as possible. I tried to pass Jeremy [Seewer], because he was ahead of me immediately, and then tried to go over Romain [Febvre], but he had a good pace. I could manage to take a couple of seconds… Maybe two seconds and then I decided to just settle for second place. It was enough to win another one, another GP. I’m so happy.

Even Jeremy admitted to me, when I interviewed him earlier, that when he was following you in the first race he was like, “Cool. I’m following Tim. This is good.” He knew you had more in the tank though. How much more did you have? Honestly, even in Germany, I feel like I have not seen you ride like Tim Gajser in a while.

Yeah. It is definitely always a great feeling when you win the race and then you know that you were not close to one hundred percent. If someone would push me hard, I still have something. I can push even harder. That is always a great feeling. I’m really happy that we worked so hard during the winter so that I’m in such a great shape and I have an amazing bike with Honda and HRC. I did a comfortable lead in the first moto, around seven or six seconds, then I just controlled the race, because I knew that it was going to be really hot and a long thirty-five minutes. I managed to make a nice win.

With that crash in that second moto, what happened exactly? I did not see it, but your bike was facing the wrong way… That is never good.

Yeah. The crash was not big. I almost saved it, because I jumped on the edge of the track. It was dry and stony. I just lost the rear tyre. The rear tyre was slipping away. At one point I thought that I could even save it, but then it went just like too deep. I just turned the bike, did not even crash and just laid it down. I stalled the bike as well.

It didn’t start immediately, because I was in third gear or something like that, so I had to find neutral and then rejoin the race again. I managed to pass Jeremy immediately, but Romain had already seven or eight seconds and a comfortable lead. I tried to push in the beginning to close the gap, but then I just settled for second place.

When you got up from that crash, were you quite mad at yourself? Were you like, “Come on, Tim! We fixed this!”

Yeah, I was definitely. It happens. It can happen to everyone. Just little crashes that I made in Teutschenthal as well, in the first moto, and now the second moto. Definitely I will try to work on it. I am one hundred percent focused on the racing, but you can make mistakes especially on these kinds of tracks where the ground is really hard. In some places the track was really narrow also. In the future I will do my best to try to not repeat these kinds of mistakes.

How much did you actually try to run Romain down after you got up? I guess you did maybe two laps and then realised?

Yeah, three laps. When I passed Jeremy, maybe five minutes. I closed the gap a little bit for two seconds, then it was still I think five or something like that. Romain was riding good. The pace that he was riding was high. If I would like to get even closer, I would need to risk a little bit more. It was not necessary. I won the GP even with a second place. It was just a shame about the mistake that I made in the second one. Anyway, like I mentioned before, try to learn as much as possible from them.

What did you think of this track, honestly?

If I’m honest, yesterday was pretty flat. It was a bit short. Narrow in some places, like I mentioned before, but in the end in the second race it turned out to be really fun with many lines. I really liked that they did not work on the track during the motos. They kept it rough, with deep ruts and everything. That was good. You could make some passes, because yesterday when I was watching MXGP and MX2 on the TV it was really difficult to pass. It was one fast line. There were not many ruts in the corners, so today was nice.