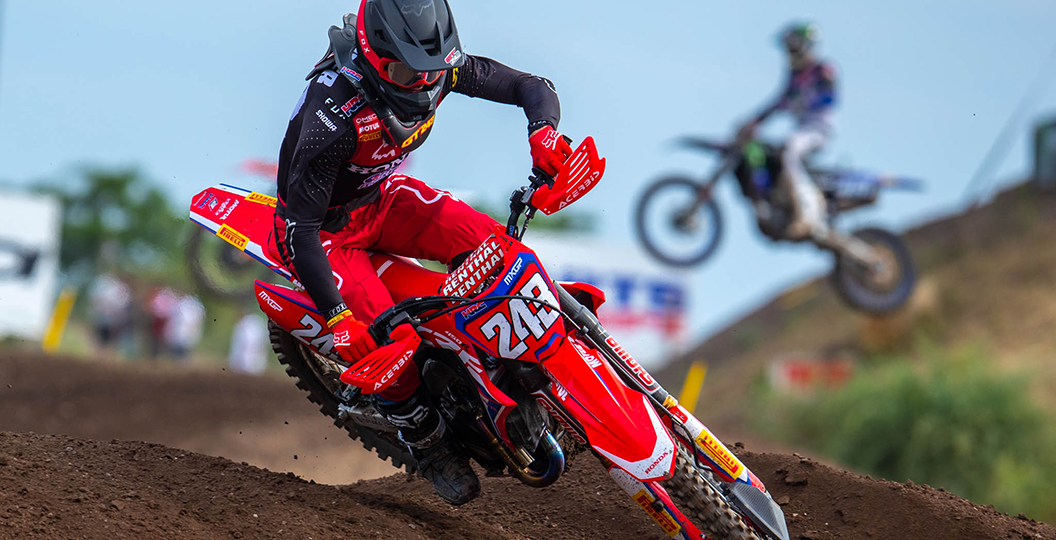 Another week and another win for Tim Gajser. The transformation that he has made in the last six months or so is simply phenomenal and may not even get the attention that it deserves. That has resulted in him grabbing five overall victories in succession. How did the fifth triumph at the Grand Prix of Germany come together for him? Gajser breaks it all down in this exclusive MX Vice interview from Teutschenthal.

MX Vice: A perfect weekend. Every single session, you were pretty dominant across the board. There were little mistakes here and there, as you tipped over in the first moto, but nothing major. All in all, just exactly the way you would want a weekend to go.

Tim Gajser: Yeah, exactly. Could not wish for a better weekend. Going 1-1 for the overall, it is just unbelievable. I am so happy. In the first moto, like you said, I made a little mistake in the beginning of the race. I would say on the fourth lap or something like that. It was nothing too big, I just lost the front-end and crashed in the corner. I tried to regroup as soon as possible. I made again a comfortable lead, like twelve seconds, and then controlled the race. It was a good one.

I kind of felt like, at the beginning of the second moto, you settled into it a little bit more. You did not really push the limits as much as maybe in the first one. You just kind of sat at a two-to-three second lead and were taking your time, I guess. Was that kind of an effort after the mistake in the first one?

Yeah, exactly. The track was really deep with many ruts. It was easy to make a mistake, so I did not want to go over myself. I was riding in my comfort zone. When I make a gap, like five seconds, then I just controlled the race. Like I mentioned also in the press, it was like the sun was quite low and then especially when you went there on the triple you were almost blind. You could not see. I was riding a smart race, let’s say, in the second one.

I do not feel like you were actually riding at one hundred percent and pushing your limits at all this weekend. I feel like had someone stepped up and pushed you, you would have been able to just go, “Okay. Watch this” and then turn it up again.

I like these kinds of tracks. It was really good to have a really technical track after a couple of MXGP rounds where the tracks were quite smooth and flat. Especially here you can really make a difference with the line selection and also with the riding technique. I was enjoying a lot, let’s say, and definitely it was a great win. I was first in every session and also it was just unbelievable to take also three holeshots, even in the qualifying race yesterday and today in the first and second motos. I am really happy with that improvement as well, because we were struggling with the starts in the beginning of the season. Now we are slowly getting better and figuring out where we can work on it, so finally also the starts are paying off.

A lot has changed in the championship. You came in with a thirty-three-point lead. It is now eighty-three. That is a good change for you. Are you changing anything with yourself to accommodate that? Obviously now with your main competitors out, you do not need to push the limits. Is that kind of in the back of your mind or are you trying to not let it affect you?

I don’t want to think like that, because otherwise I am going to start to ride not comfortable. I just want to go in the race and have fun. Definitely I have to be smarter. I have to ride smart as well but, as long as I have fun on the track, I know that I can go there and win the motos and the overall. That is the goal for the upcoming races, just go there and have fun. [I want to] enjoy the racing like I do now. I think that’s a really good way.

It’s funny that whenever a contender gets injured, people always think that the other guy must be so happy. You obviously now have a clear path to the title. Being a racer though, you obviously want to go up against the very best guys. You have never actually raced [Jeffrey] Herlings on a 450F when you have both been at the very top. I am sure you are quite excited to finally do that, so it is a bummer that they are out.

I think, if we are honest, it is never going to be perfect. We are humans and everybody thinks differently, but how the track was prepared today I think was a good track. It should be like that in the GPs. I think a track like Russia was a bit too smooth without any ruts or bumps. I think the crew, the guys who are preparing the tracks, are definitely giving their best. They are trying to do as much as they can between the breaks, because we do not have such big breaks between the motos.

This track obviously looks gnarly. It is rough, but that is actually better. The best riders, like yourself, can kind of show what they can do. It is slower too and that means there is less risk.

Yeah, definitely. I agree with you. It is way more technical. On the track like that, you can make a difference if you are better. You could see in Russia that the top twenty guys on the lap times were just two seconds [apart] or even less. We were really together. When it is flat, everybody can push. I think it is safer as well, because the pace is not so fast. It is really technical. I think that is good and better.

Onto Indonesia. Do you like that crazy, crazy place?