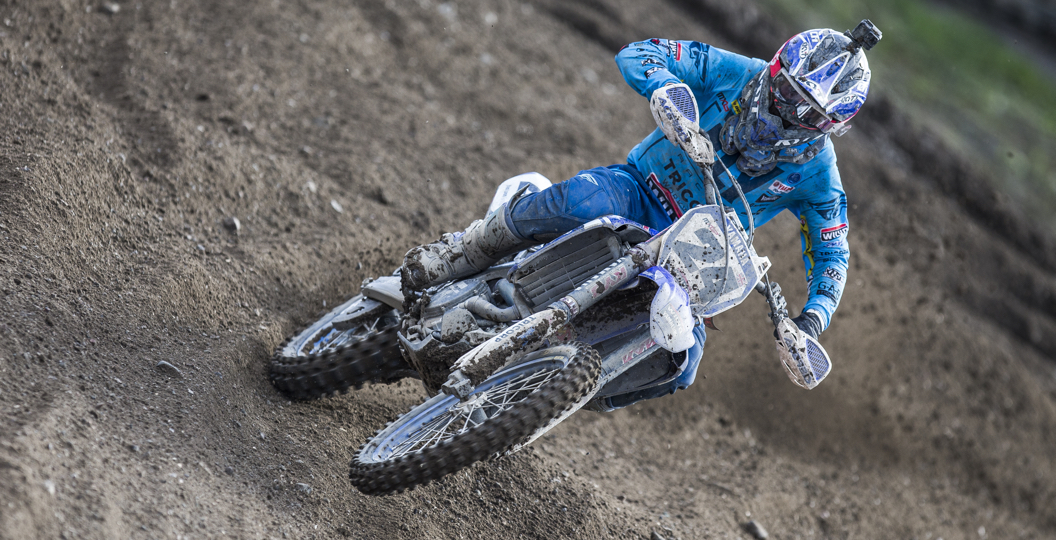 The hype for the opening round of the FIM Motocross World Championship is beginning to climb and various pundits are speculating what will transpire in the coming months. Shaun Simpson has been left out of a lot of those pre-season discussions, however, which may turn out to be a rather large mistake. The Wilvo Yamaha MXGP rider has enjoyed a productive winter on the all-new YZ450F and is seemingly raring to get behind a starting line again.

MX Vice: We will start with the final part of the previous season, where you struggled with bike settings and whatnot. Now that time has passed and you have spent a lot more time on the all-new YZ450F, I am guessing that you understand those issues a little more?

Shaun Simpson: Yeah, definitely, I think it is one of those things where, no matter how old you are, you always learn more about yourself, the sport, your bike, the way you set things up and your approach. I would say that it was a really steep learning curve. It had been a while since I got injured in the middle of the season, especially having missed a few MXGP rounds. It was not really something that I had faced before and I really thought that I could come back in and be at the sharp end or at least get some results that I was proud of.

Things just did not happen at all at the end of last year. Whether it was the bike, me, the injuries or mental… It could have been a combination of all of those things. Things just did not work out. I think the biggest thing that I needed to do was totally reset myself, have a break, go back to square one with the bike and just start testing all over again. That is exactly what we have done and we have come out feeling a lot more positive and stronger. Everything is going down the right path at the moment. We were just up the wrong street, as it were. I was glad that the season was over.

It is interesting that you say that. I know that some of the Yamaha riders in the USA basically went back to stock and then built the bike up from there. Did you do something similar?

We did go back to stock with the suspension and chassis, but I was quite impressed by the engine. We put the power where we needed it and did not have to do too much. I was actually really pleased with it. The only thing that we had to work on with the engine was starts and I think that we have improved on that. On the suspension and chassis side, I just felt like I was totally in the wrong zip code. I just needed to go back.

The Japanese build a good bike and it is meant to fit a lot of different riding styles straight out of the crate. I am not saying that you could just rock up to Argentina on it straight out of the crate and be on point, but it was a really good base to start from. That was basically what we did, in that respect, and I would say that it was beneficial. We can even go back to that if we need to. Even now, we have references to the complete standard suspension and chassis set-up that I actually really like. We are still using that as a reference today and improving.

The team are giving me the support that I need to get to where I need to be and are behind me one hundred percent. It was not a case of me stressing everyone out and going back to square one was a step backwards, so it has been a good process. I feel like I have learnt things about set-up, the future of bikes and how things are evolving. It has been good. It is something that I would say I am quite technically good at and I enjoy doing. Getting the little gains wherever you can is what needs to be done and I feel that we are doing a good job with that.

Speaking of the chassis, it sounds like that was a big improvement that was made on this all-new bike. Was that something that you immediately noticed?

It is. You know, even now, I am still finding out things about the chassis. Now that I have got it really dialled in for my own spec and set-up, I am finding it more impressive. The issues that we came up against at the end of last year really held me back and I was focussing more on those issues than the good parts, which is always the case. You focus on the bad parts rather than the good parts. Now, looking at it as a whole, I feel like that improvement has been fundamental in making this bike what it is. Where we have got it now, it is just the main part of the whole package. I feel that this is definitely a bike that we can do some damage on.

The team dynamic has obviously changed a little this year, as another rider has been added. Jeremy [Seewer] and Arnaud [Tonus] both have contracts that run beyond this year, whereas yours will run out, so do you know if the team will still have that third spot available for the following season?

I have no idea at the moment. It was quite a shock at the very beginning, when we heard that a third spot would be opening up, especially as the team is so young. Committing to three riders is a massive deal. It is something that Louis [Vosters] is passionate about and looking at this year, he saw that there was a certain number of races where he only had one rider on the starting line. That was something that he was slightly disappointed about in his first year. These things happen in the sport, but having three riders and the facilities to run that many riders is more of a fail-safe. The support was there from Yamaha to do that too.

The structure of the team has changed. There is an extra van, rider, two extra mechanics etc. For such a young team, I think that Louis and the guys have managed to deal with it really well. It feels like the team has been around for ages. Nothing phases us as a team and we are working well with all three riders together. It is not like everyone has their own plan; there is a great team atmosphere.

We are all staying at the same place here in Sardinia and we have been practicing together, training together and cycling together. The whole team, as a unit, is working really well. It is just one extra bay in what is already a big awning. From that side of things, the team can definitely cope and hopefully we can have three Wilvo Yamaha MXGP riders up front. I do not see why we should not be able to bring it to everyone else.

Is there a particular thing that you are keen to fine tune at the Italian races that are coming up, like your fitness or a certain setting on the bike?

I think my fitness is as good as it has ever been, to be honest, especially at this time. The races are not that long and there are only two of them, so fitness does not really come into it. I am really intrigued to see how the intensity is going to be, as we have been working on that a lot. I do not think that is going to shock me too much either.

I think that is going to mainly be feeling comfortable with everyone at that pace and around me, starts and hopefully bagging a couple of good results that I can feed off of mentally. I have been building up all of this great confidence during training and on practice days, but I have not had a great race result for quite a while now. Even though it is a small Italian race with a lot of top riders, I am really hoping to get some top results and feed off of that ahead of the first Grand Prix.

Finally, before I let you go, do you feel that you are getting a bit of a bad rap in pre-season discussions? You were one of the few riders to actually win an overall last year, but now you may be more of an underdog than ever before. Do you recognise that?

I actually enjoy that a lot more than people blowing hot air up my arse, not that that happens very often. I would rather come up with no one expecting me to do damage and just shock everyone. I like being overlooked. I know personally what I am putting in and that I am confident in my programme. The team are behind me and we have got the bike better than ever before, so I just want to go and do my talking on the track. There will be a lot of other guys in good shape and on bikes that are ready for action, but someone has to win and stand on the podium. It may as well be me.

I just have to go in with that attitude and if we fall short at the first couple of races, so be it, then we will try to grow and do everything we can to get the results that I deserve. I feel that I have been falling short of getting the results that I know I am capable of for a few years now. I want to get back to that consistency that I had in 2014 and 2015 and show my team and myself that I am a force to be reckoned with. There are plenty of fast laps left in me yet.