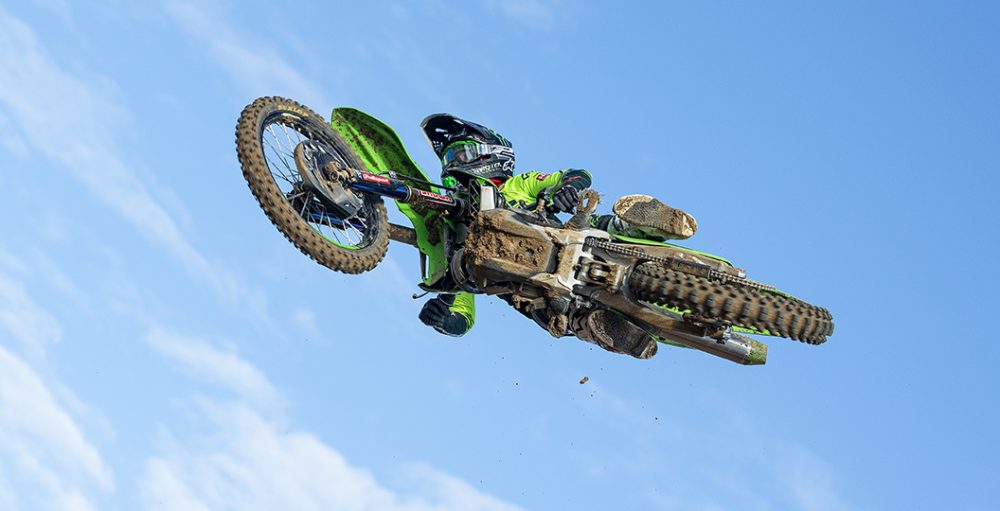 Romain Febvre has been a revelation in the 2021 FIM Motocross World Championship. It has been so long since he was a consistent contender for race wins, let alone the championship, but he has arguably been the quickest rider through the thirteen rounds that have been run thus far. The results do not tell that story, as he has secured a single Grand Prix victory and just four moto wins. Wins have been left on the table in Italy, Turkey, Germany, France and now Spain.

It is difficult to pinpoint the missing piece for Febvre; he seemingly has all of the qualities needed to seal the deal and win many events. Why is it not happening? Such a question was put to the man himself in this exclusive MX Vice interview from the Grand Prix of Spain, where he ended in fourth overall via 1-7 moto scores. A crash in the second moto restricted him, as he could only move from last to seventh. Even that was a great look at his speed and potential aboard the KX450-SR.

MX Vice: I do not know how to talk about your day, because you were so fast. You are riding unbelievably well at the moment. The overall wins are just not coming though – a fall in moto two was the reason for that this week. It must be frustrating though, because you are riding so well. You are so close!

Romain Febvre: For sure, it is a little bit… I always come close to the overall and finally do not make it happen. It is like this. I mean, I tried to be consistent and we are coming close to the end now. We have to take everything we can. I was feeling really good in the first moto. I had a really good feeling from the morning – the track was really good. They prepared it really well. It has been a long time since a track has been like that. It was grippy all day, which was really good. Yeah! In the first moto, I felt comfortable and I was really pushing behind [Jorge] Prado. I made the pass and then a comfortable lead, so I won the race. I closed the gap to first place in the championship again too.

In the second moto, I had a bad start. I just touched elbows with [Pauls] Jonass, who was on my outside. I was behind Jeffrey [Herlings] in the first turn, completely on the inside, and I think I was in seventh or eighth. In the third corner, coming down the hill, I tried to take the inside line and touched the back of someone. I do not know who, but I crashed. It is never good to crash on the first lap. I was dead last and then I said, “I really have to fight again to grab some points.” I did do that. I came to seventh, which I never thought about. The riding was good. It is like this. I still got good points and I am happy with the first moto. My starts are not the best at the moment, which I will work on this week.

Any reason why your jump out of the gate in the second moto was not very good? The other guys swallowed you up. I thought that it may have been that you were focusing on that to the point that you were in your head too much.

Not really. I was just focused like always, but I think that I did not have a bad start. We just came together with Jonass – we touched elbows and I thought that I would go over him to pass him. I did not and he went in front a little when we touched, so he closed. I could not do much with that. It is tough. The start is always a competition. If you do the smallest thing wrong then you do not start at the front, so it is difficult. It can be the reaction and a little bit of everything. I will study the data and the video that we have, then work on that this week.

Looking at your season as a whole, you could have seven overall wins at this point. You have been that good on sand, hard-pack and mud. You have been so good everywhere and maybe the best all-round rider. Crashes caused you to throw away a couple of wins at the start of the season, but I think that you have gotten better with that. I do not know what it is… It is almost like you are missing half a percent. Something so small. Do you know what will give you that extra edge to help you reel off a couple of wins?

It is tough! For sure, I crashed many times at the beginning of the season. Small crashes that caused me to throw away a lot of race wins and overall wins. That was how it was. We worked on that and I have been better since Germany or maybe even before that. I do not crash – I am riding really good and do not make so many mistakes. That is really good. It is not like I am overriding for myself, so I think that it is like you said. I am consistent and a fast rider at the moment, but that is not all.

The start is a lot of it. If you start in the front, like I did in the first moto when I was second, then your whole life is so much easier. I think that this is the key point. You can see the example of Prado; he is always in the front and he can hold on for fifteen minutes, even if he is not the fastest there, and then finish on the podium. I think that the last piece of the puzzle will be the start. I am not bad at it – I just need to be more consistent with that. I think that is going to be the last piece.

You are deep in this title fight. You have not finished in the top three in the championship in a while, so are you in a position where it is first or nothing? Would you be like, “Second is an improvement and I will take that.”

You are heading to good tracks for you too. You were so fast at the last Trentino last year, then you won Mantova last year. You are in a nice spot and it is not like you are going to tracks that you suck on.

Yeah, for sure. That is really good for me. I like Arco and we have three GPs there. I hope that I can make the difference there and at Mantova, a track that I also really like. It is positive for us.

Last thing. Are you happy at the moment? You are ridiculously quick, winning motos and sitting second in the championship. There is so much to be happy about. Are you focusing on the overall wins that you have lost out on? Is the need to win another overall almost taking away from all of the happy things?

Yeah, but I am not like so focused on winning the GPs. I am just doing my best at every race. Even when I won the first moto, I was not like thinking that I have to win the second race. I just do my best every time without thinking too much, I think, and that is a positive thing that I have taken from what I learnt before. It is not working that well at the moment, the overall results. That is how it is. To win the championship, I will have to win races and maybe GPs. I try. I try! I am happy at the moment. I really feel comfortable, fast and my shape is good. I have no sense to be negative, but it is close. I was one point from the red plate after the first moto and now I am twelve. That is from one moto. Anything can happen and we are still in the battle for the title. We will see what I can do in Arco.