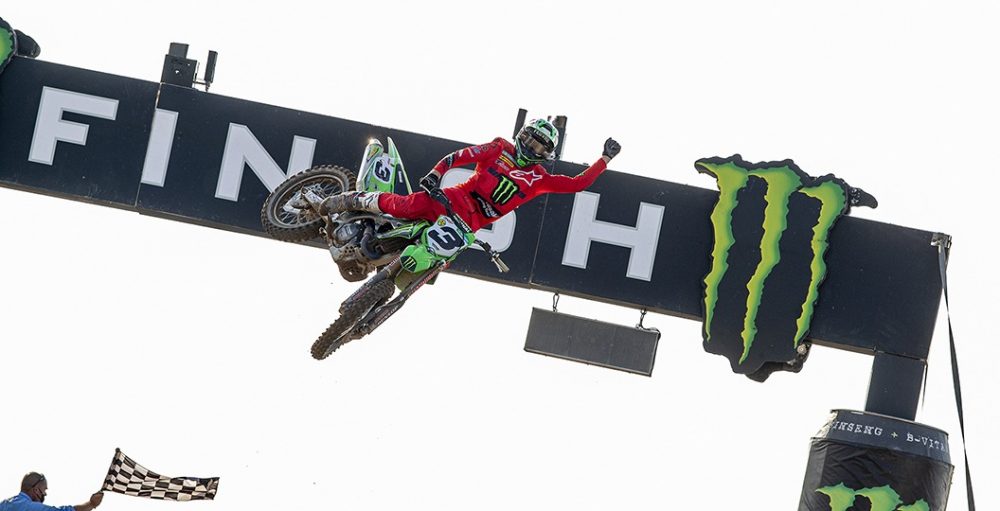 Romain Febvre has shown potential since joining the Monster Energy KRT team at the beginning of the season, so the fact that he just won the Grand Prix of Citta di Mantova shouldn’t come as much of a surprise. Is it actually frustrating that this didn’t happen sooner than this? Febvre tackles that in this MX Vice interview, which was done immediately after his first victory in 431 days. This interview was first posted as an MX Vice post-race podcast, presented by FLY Racing.

MX Vice: First win on the Kawasaki, which may surprise some people, but since we returned to racing it has been clear you have got the speed. You are clearly feeling comfortable on the bike. This win is no surprise at all. It’s been a long time coming, actually.

Romain Febvre: Yeah, for sure. Like you said, it has been a long time. I think the hard work paid off. I had the speed definitely for a few GPs already, but I either missed the start a bit or made a mistake and crashed. Like I said, I have all the pieces of the puzzle. I have to put everything together now. It’s what I did today, in the second moto, with the win. In the first one, I was third from the first lap and finished third. I just was not riding that good, but I feel like I should battle with the first guys to be maybe better. Third and first, I will take it for the overall.

Even before today, were you starting to get maybe a little bit frustrated? There have been a few times now, where you have been in a position to win and then it just has not come together for one reason or another. Have you been getting a little frustrated waiting for this to finally happen?

Yeah, a little bit for sure. I know I have all the pieces from the puzzle, like I said, but the team also tried to help me in that way, to try to be a little bit better than we were. At one point I just told them, “The bike is good. It’s coming from myself a little bit, for sure when I crashed.” I knew I could have a good start, but it was just because of something that I did not make it. I just told them. I think for a few weeks we have not changed anything on the bike. Since we came in Mantova, from the first Sunday, I didn’t touch anything. I told them the bike is good. I just have to put everything together.

Pretty impressive how you hang on in that second race, because you were dealing with a lot of pressure. Tim was right there, under a second for half the race and you did not even flinch once. That proves just how comfortable you are.

Yeah, for sure. Once you are in the front it’s a much easier way. I’m used to being on the back, so you can choose your lines. You can ride clear. For sure, in a way, Tim [Gajser] could see my lines and then maybe make some improvements, like I do normally when I’m on the back. I saw that in the last sector he came close a few times, but I feel that if I did not make a big mistake then he could not really pass. I just kept the lines, tried to keep my speed and I think he made a mistake. We pulled a small gap between second and third, so when he crashed I had a few seconds. I could keep calm. It was quite stressful to ride to the end. Finally I made it, so we are happy.

Maybe it’s tough to say but, in my opinion, I think this is the best you have looked and ridden since early 2016. I think you look that comfortable that we have the title-winning Romain and the early 2016 Romain back. Do you feel that way?

For sure. When you are winning everyone says you are looking like ’15 or ’16, which was when I was winning too. Many years have passed. The level grows and the bikes are also better. I do not know. I feel good definitely on the bike with everything. Hoping to keep it that way.

For people who are maybe not paying close attention, you are further down in the standings than you should be. You missed the first two rounds. If I gave you like a ninth in each of those four motos, you’d be right in this title. That is frustrating, I’m sure, but again just a nice thing to know that you are right there. You have got everything you need to do the job.

I don’t want to hear that [laughs].

I know, but what I can say? I was not there. It’s my fault. I was injured. I know with some overall points I could be fighting for the title. It is how it is. Nothing can change that. Nothing to say.