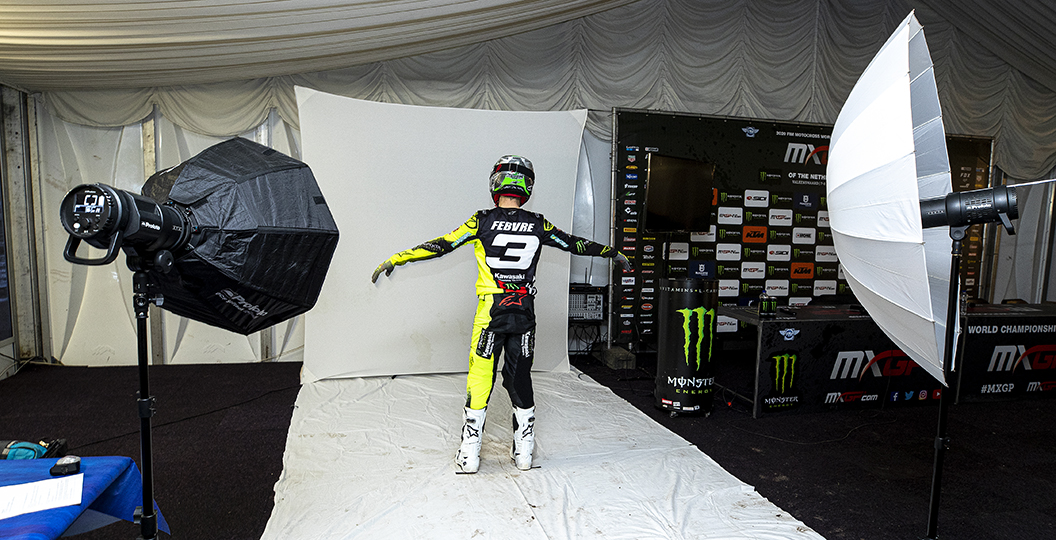 Romain Febvre has not really been talked about much in the 2020 FIM Motocross World Championship, as a pre-season knee injury ruled him out of the Grands Prix in Great Britain and The Netherlands. What actually happened with that injury though? It has not been explained fully, until now that is. Febvre covers exactly what happened and the recovery process in this exclusive MX Vice interview. The good news is that when the series finally resumes he should be at one hundred percent and in a spot to fight for overall victories.

MX Vice: We haven’t actually spoken since your knee injury that happened just before the Grand Prix of Great Britain, so what happened there? You didn’t even crash, did you?

Romain Febvre: Yeah, I did not crash. I was training in Grevenbroich in Germany. That was ten days before England. I was riding there, and my foot slid off the pegs. I hit the ground with my leg – it was like fully extended. I had like all of the impact in my knee. I felt like something was wrong straight away, but first of all I thought I broke my femur again. I had quite a lot of pain. I could feel it all in my femur, first of all, then it moved to my knee.

I have still got the screws in my femur, so I thought that I may have broken some screws close to my knee. I went to get a check at the hospital, so I had an x-ray, and nothing was broken. Nothing moved. I was happy about that, because it meant that it was not something bad. I still had a lot of pain though and I couldn’t walk anymore. We agreed with the team that we would take it day by day, and then we got opinions from many doctors in Spain, France and Luxembourg.

They all said you had to rest, because it was like inflammation on the bones. They said it could take some time, but they didn’t know how long it was going to take. They told me to have some therapy and do different exercises, which is what I did, and I tried to race in England. I was just in too much pain though. It was the same in Valkenswaard, so I could not ride one week later.

Do you think you would have been able to ride if it was a hard-pack track that was not as rutty, like St. Jean? Did the gnarly track conditions play a part in that?

No, no. England was really rutty and muddy in the beginning, but that was not the problem. The jumps were not too bad, but I only rode a few laps so I do not know if I could have held on for thirty minutes. It was just the corners… I could not take my leg off of the footpeg. I had no power to take my foot off and then put it back on the footpeg again. It was not possible. I tried, but I do not think I would have been able to do it even if it was flat and hard.

How are you doing now? We are a month on from Valkenswaard now, so there has been some time. Are you getting back to normal a little bit?

Yeah, now it is really good. I think that two weeks after Valkenswaard it started to be okay, so I was able to ride a little bit before everything shut down. It was not perfect, but I could ride. I think it is now close to one hundred percent. I am running a lot and have no pain when I do that. I think it is almost there. I should be able to start my training again and do everything that I can, as soon as we can ride again.

I guess this break with the coronavirus has been good in a way, because it has helped you get healthy again. Now it is hurting you though, I guess, because what you really need is bike time to build your fitness back up.

Yeah, for sure. It hurts, first of all, because it is quite a bad virus and people are dying from that, so it is bad to say that it was good for me. It has helped for the championship though in a way. I could not race at the first two rounds and then they stopped the championship. Everyone who was injured has an opportunity to rest and get fit again, so they can be ready when the series starts up again.

You did a couple of pre-season races before you injured your knee. Riola was tough and you could see that you were still coming back, but then I was amazed at how much better you were at LaCapelle. The progress that you made in a couple of weeks was phenomenal! What went into that?

I went to Sardinia quite early on in the winter. It was at the beginning of December that we decided to go there with the team, but we decided to do that after my injury last year so that we could take it very slowly and have time. It was time to get used to the bike too. I could not ride so much in December – I still had a bit of pain in my leg. The bone was not fixed completely. I took it really easy in December and then it started to get better at the start of January.

I could ride for two days in a row, whereas in December that was not possible. I just felt like there was some pain still and when you feel that you knock down the speed a little bit. You just go slower, even if you think you are going fast. I was riding with Ben Watson, and I could see that my speed was not where it should be. I was not worried about this. I knew it would easier to go faster once the pain stopped.

Riola came about quite fast and I wasn’t going to do it, but we had one week of testing before and it went pretty well. We decided with the team to do it after that, even though I knew the speed was not there. I thought that maybe during the race I could do a bit better. The speed was not there in the time practice, of course, and the races were tough with arm pump, which I didn’t have all winter long. I had a conversation with my trainer, Jacky Vimond, at Riola and I said that maybe I need to go through the pain, just to push.

If it hurts then I needed to slow down and take care, but if it was just a little bit of pain then I needed to go through it and then the speed would be much better. We had a couple of weeks before LaCapelle, and I had really good training again. We built my speed and confidence too. At LaCapelle I did not think about my legs anymore, so it was starting to be really good. I had a good race there and fought for the victory in both heats. That was a pretty good feeling before England.

How was it getting used to the Kawasaki after so long on the Yamaha? Was there one thing that you really liked about it and then one thing that maybe took a while to get used to?

I changed from Yamaha, because first I tried the bike and I felt good on the Kawasaki straight away. I felt that I could do really good with that bike, so I changed because of that and also to find some new motivation with a new team. I knew that the team was good, and I really like some stuff on the bike. That is why I chose to go with them. I didn’t have too many issues getting used to the bike.

It is just about the suspension and the tyres really, because I have never ridden with Showa or Dunlop. I had to tell the Showa guys what I like and then they had to figure out what they needed to do. It was just getting used to the suspension, and a little bit the tyres, but the rest was quite easy.

Yeah, for sure. Even if we have twenty rounds, which I don’t think we will, then missing two Grands Prix makes it very difficult to fight for a podium finish or even a top five. That is just how it is. We spoke with the team before, and I was injured so I could not ride. I did not even crash, so it is not even really my fault. I was on the bike, yeah, so it is my fault. It was a little bit of luck too. That is just how it is.

The team were really nice to me – they told me that if it was not going to work out this year then we will continue next year and fight for the championship. They see a long-term partnership between us, which is really good. I feel really at home in the team and with them. Hopefully I will be a little more lucky in the future, and then I can have some good results with them.