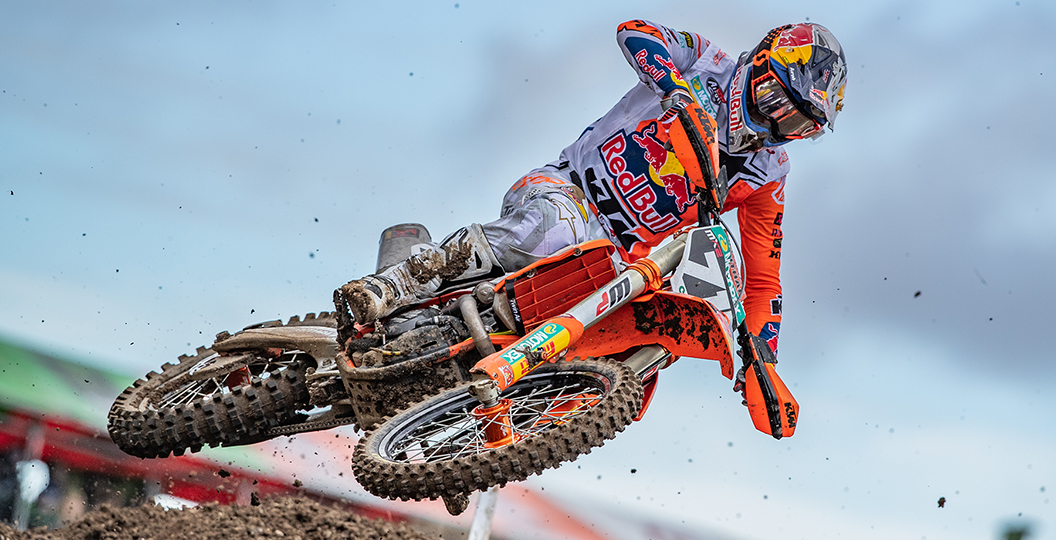 Red Bull KTM have done it again! Rene Hofer is the latest prodigy to be plucked from their amateur programme and placed into the MX2 division, and he made an immediate splash at the Grand Prix of Great Britain. Hofer led countless laps at the season opener and there are now real expectations on his shoulders. How did he feel about being a podium contender the first time out? Hofer talks about that in this MX Vice interview from Matterley Basin.

MX Vice: Well, as far as MX2 debuts go this was pretty good. Obviously, you did a couple last year. This is your proper debut though and you almost won the thing! I don’t think there is anything wrong with what you did today at all. It’s pretty much a perfect start.

Rene Hofer: Yeah, definitely. It was amazing. First moto I was a little bit unlucky. I was in third and I couldn’t pass the second guy, and then they came from behind. I was running sixth until the last lap, but then I made a small tip-over on the last lap and finished eighth. I was totally okay with it. Second moto I had the holeshot and Jago [Geerts] passed me on the first straight. First lap I tried to send it and passed him back. The track was awesome. I had so much fun in the second moto. When Tom [Vialle] passed me, I just tried to follow him. It’s amazing to lead an MX2 race. Really satisfied with this day.

I’m guessing the experience that you gained from the first moto from helped you leading the second one, because you had already done it at that point.

Yeah, of course. Definitely better it happened in the second moto. I wasn’t nervous at all, honestly. I just enjoyed the track. For my debut it’s amazing of course.

No, not at all. On the pit board they just wrote the lap times and stuff like that, but no overall predictions.

Did you even know that you were in a position to win the overall at one point or is this breaking news?

At one point you were going to win the overall. I was about to say that Red Bull KTM can do no wrong.

Being honest, where did you expect yourself to be here? Did you have a goal in mind? I guess top ten would have been a safe place to start?

Of course. It’s the same now. We try to be in the top ten consistently. We don’t expect the other races to be easy like that. It’s the rookie season and we are here to gain experience. We just go race by race and do our best.

I know there was a bit of a debate coming into this season about whether you’d ride EMX250 or MX2. From what I understand it was you who was saying, “Put me in MX2! I’m ready!” I guess you kind of knew this was coming. Another year in EMX250 would have been a bit of a waste.

Actually I had a tough beginning to the season last year. I had quite a big injury in 2018, so my winter preparation last year was not so good. During the season I came more into my flow, and especially the MX2 result were pretty good. I think the seventh place in Imola was like a click for the KTM bosses to say, “Hey! Let’s do this.” I’m now really grateful for this opportunity.

Moving forward, like you said, the goal is to keep your feet on the ground and take each race as it comes, right? It’s your rookie season, so there will be mistakes.

Yeah. Like I said, I just try to go race-by-race because I know these guys are really fast in MX2 and the intensity is so much higher than in EMX. I’m totally exhausted right now. I try to do a proper preparation for Valkenswaard now and we’ll see there.