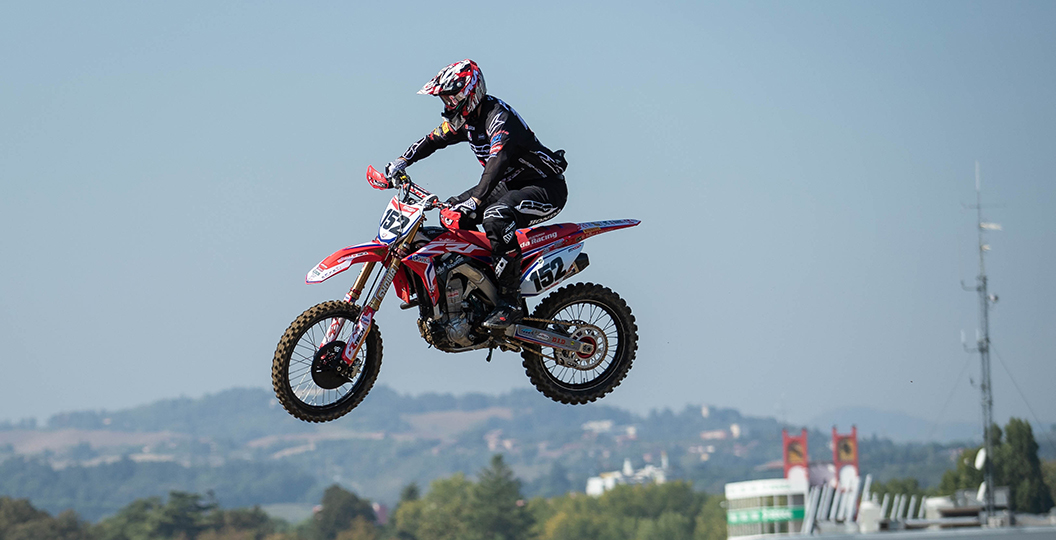 Petar Petrov endured a turbulent term in the premier class in the FIM Motocross World Championship; injuries and other issues stopped him from fulfilling his potential on an Assomotor Honda. The misfortune that he encountered then made it tougher for him to acquire a deal for next year. Petrov has now finalised his future though and discusses that in this exclusive interview. It’s a great opportunity to learn more about North Europe KTM.

MX Vice: Your deal with North Europe KTM was just announced yesterday, so just explain how that whole thing came about.

Petar Petrov: I decided to do some beach races with Honda, to do something different, then this team was already there, so we came to talk. They were planning to do MXGP. It is a new and young team. They are really motivated. They just came to talk and two weeks later we came to an agreement and decided to do the rest of the beach races with them. It is a new challenge. I am really excited to do it.

Do you know what sort of support you are going to have with the team? Are KTM going to be helping out at all? Is it just a real privateer effort?

I think KTM Belgium will help. For the moment I think it is going to be private, but I think we have quite a good bike already. We will see how things go.

I am guessing it will be quite nice. It sounds like this is going to be a team that is built around you, so if you need to make a change or you feel like the team could do something better that is kind of in your hands. Whereas, at Assomotor, maybe the team was focused on winning EMX or other things?

Yeah, sure. I feel like they are really motivated; they are looking for the best stuff and the best material we can get. I am really looking forward to working with them. I like that they look at the best mechanics and are trying to get the best mechanics. It is kind of nice to have everything a little bit more around you and focused on the bike; just to have a good structure and good, young and motivated people around you.

What is the plan with the amount of MXGP rounds you are going to get to? I am guessing it is just Europeans?

Yeah, for the moment it is going to be just Europe. We will see for the future. Like I said, it is a young team and they have really not had much experience. I think we have guys with experience in the team, also myself, and I think we can do some good results. I’m really looking forward to it.

Are you happy with not going to the overseas races? You are young, have got a lot to prove and should really be at the events. I guess you are just happy to have another opportunity to prove yourself in MXGP though?

Yeah. It is only four or five Grand Prix that we will miss overseas. It is what it is. It is very expensive. It is not ideal not going, obviously, but at the end of the day, I think we can show very good results. We will try to save the money going overseas to put it into the bike or into the preparation and all those kinds of things. It is a young team and we decided to do it this way.

It sounds like this whole deal came together quite late, so was there a point where you were really worried that you were not going to get anything at all? Did it get that bad at one point?

We did not get that bad, but we were just talking with other teams that were more focused on national championships. I don’t think that I’m at this time of my career to focus on a national championship. I’m just twenty-four and I still have a long time to go in MXGP. Just because I had a difficult season this year with injuries and struggling with the bike doesn’t mean that I am not fast enough to be there.

I feel like my place is in MXGP. That was the reason why everything came up so late. I was just waiting for the right opportunity, the right bike and the right deal to have it all done. That’s why it all came up so late. I was not that worried, because I always had the bike for practice. Even with those beach races, I had something to do and that kind of took my mind away from just focusing on the future.

You are only twenty-four, like you said, but you have been around for so long that it seems like most people think that you are only two years away from retiring. Do you feel like that hurts you sometimes?

Yeah, sometimes I feel like it hurts me. I started riding GPs when I was fifteen-years-old. If people think this way about me, they should be thinking the same way about Jeffrey [Herlings]; we started around the same time. I feel like I am far from retirement. I still have a long way to go, I think and I hope.

You mentioned that you struggled with the bike at Assomotor. I know [Arminas] Jasikonis struggled with the team being based in Italy, when he needed to test in Belgium, and had to post parts back and forth. It was just difficult to relay what you exactly needed. Did you face similar issues?

Yes and no. Obviously, I felt really good in the winter. All winter I was good and then, just two weeks before the season started, I got injured. That took me quite far back and then I was late to the testing. Everything was just way back and at one point I started getting comfortable again, then I re-injured myself. Just small things like this. I never got to that point that I said, “Okay, I am really comfortable with my bike. I can go out, just do my job and do it properly.” It did not happen all season.

Once my confidence was gone and everything, it was just very hard to catch up. Once you are injured during the season, it is pretty much… Not over, but it is really hard to catch up and everybody goes forward whilst we are going backwards. I just never felt one hundred percent comfortable. Like you said, the team was in Italy. I was based in Belgium and it was just a little bit of a struggle. I know that they did their best and, at the end of the day, I think we were all happy and had some good times, just the results were not there.

It was quite a struggle from start to finish. In Lommel I was around top fourteen or whatever. I was top thirteen in timed practice and stuff, but then in the races we had some issues with the bike. There were just small things at those races that I felt that I could perform. We just mostly had no luck. We had some issues with the bike and it was out of our hands, then in Assen in the qualifying race I was running eleventh or something and then I had that big crash. Small things like this always set us back from showing some potential and actually showing some good results.

I think your best moto finish this year was a sixteenth and, obviously, you are going to be shooting for more than that next year. What do you actually think you can do in MXGP?

The class is insanely strong, so I feel like if you are around the top ten it is already a very good achievement. I feel like, with the right preparation and now I have the good bike, if it goes to plan with no injuries then I will just try to be around top ten and do our best every time. I do not want to say I am going to finish fifth, fourth, tenth or ninth. I am just going to go out and do my best and then see where we end up.

I guess it is a bit disappointing for you, because through your MX2 career people were saying that you were too big for the bike and once you get in MXGP you would be able to show your stuff. Obviously, you could not do that this year. I guess you were waiting for this moment for so long and then could not take advantage of it?

Once our season was about to start, I got re-injured and again a month or so off. I started riding quite early for my collarbone and was a little bit sore for a few weeks. Then you lose all the confidence by just starting a bit too early. Then I broke my finger and II tried to ride with it. There were just small setbacks that really hurt me and my confidence this year. I am looking forward to rebuilding all of this and hopefully get back to where I think I should be.