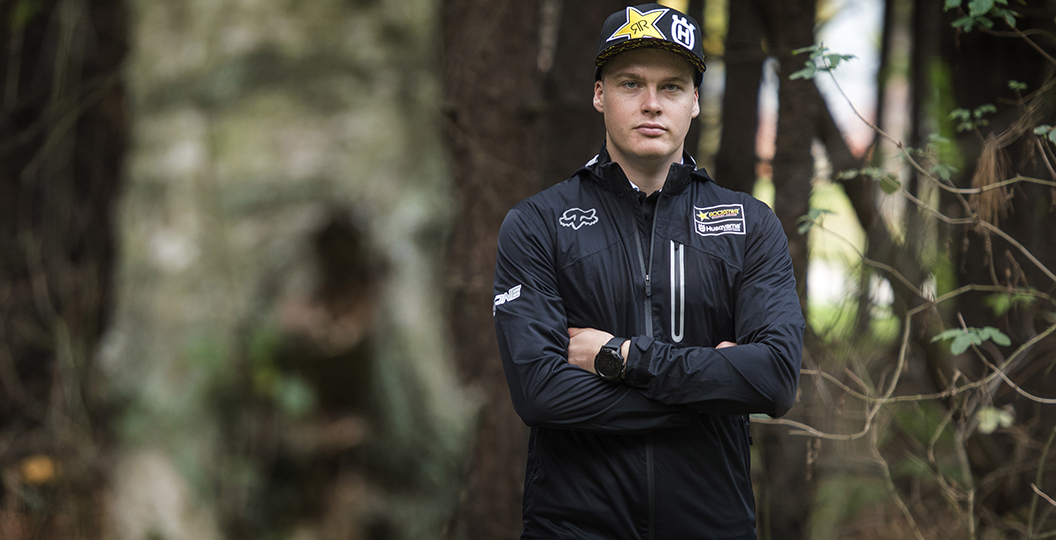 Another piece of the silly-season puzzle fell into place moments ago, as it was announced that Pauls Jonass has signed a deal with the Rockstar Energy Husqvarna Factory Racing team for the upcoming FIM Motocross World Championship. Why has he moved across from Red Bull KTM at such an important point in his career? Jonass opens up about the transition in this exclusive MX Vice interview.

MX Vice: Talk about how the Husqvarna deal came about. Obviously, it was always known that you wanted to move into MXGP and onto a 450F, but how did you end up moving across to Rockstar Energy Husqvarna Factory Racing?

Pauls Jonass: At first it was quite a big surprise when the Husqvarna guys and Antti [Pyrhönen], they started to talk with me. I still had one year [on my] contract with KTM. I was quite sure I was going to move up to MXGP with KTM. Since they already have two riders in the MXGP class, Jeffrey [Herlings] and Tony [Cairoli], I think a third rider… I would be like the third wheel. Husqvarna was looking for some new riders. I think that’s why they came to me and proposed to me to ride the Husqvarna.

In the end, did it come down to your decision or did KTM or Husqvarna decide for you? Obviously you are leaving people who you have worked with since the start of your career. You trust Dirk [Gruebel] and all of those guys, so it must have been tough.

No, actually KTM and Husqvarna, I talked with Pit [Beirer] – I don’t remember which GP it was – we stood between the two tents, between KTM and Husqvarna, and he just asked me which side I want to go. I always had the good feeling when I was talking with Antti. I think we are quite similar mentality, because we come a little bit more from the North side. I had a feeling that I wanted a little change. I’m really thankful to all the KTM crew with Red Bull KTM, but I just wanted something new and a little change to bring back the fire in me. That’s why I wanted a little change. I had a good feeling when I first talked with Antti and all the team. I like how all the set-up was and everything is turning here. That was the reason why I chose Husqvarna.

KTM have got some great MXGP riders, like you said, whereas at Husqvarna you are going to be the main guy. Everything is going to be based around you and what you want. It’s the same as when [Jorge] Prado moved to other awning to get out of your shadow, because I guess at KTM you’d be in Herlings’ shadow a little bit. That must have played a big role.

Yeah, for sure. That was also one of the reasons actually, because they have already two 450 guys. Tony still has a two-year contract, so let’s say for two more years I would be the third rider in KTM. Tony and Jeffrey are riding great. Of course, now our goal is to beat them. That’s for sure not going to be easy, but it’s always good to have teams behind you that also want to win. In KTM they have already Jeffrey and Tony who are battling for wins, so why do they need a third rider? That’s why a little bit I went for Husqvarna. With Antti I had a feeling that he also wants to beat Jeffrey and Tony one day.

From everything you have said, even before now, it’s obviously clear that you are ready to leave MX2 and you want that change. Just talk about why you feel like you have kind of done your time on a 250F now.

Actually, I made the decision already at the beginning of the season that I wanted to move to the MXGP class. Last year when I won the title, after that I did some riding with the 450F in the winter. I said straight away to my Dad and my manager, “I should have moved up already this year, because I love the 450 a lot.” I always like new challenges and I always like to move forward. I had the feeling that if I would stay one more year in the MX2, I would stay in the same point. I wouldn’t grow as a rider and as a personality. That was one of the reasons why I wanted to change and to move to 450.

Obviously you had ACL surgery a couple of weeks ago. Is that going to hurt your training for the new season? Are you going to get on the Husqvarna quite late, like January?

Yeah, for sure. Now with the ACL injury it will not be the best preparation for the season, but now it’s already four weeks after surgery and my physio is very happy with how everything is going and we are working really hard on the knee and also for sure for the physical condition. We still cannot do as much as we want, but we are moving into the right direction. My physio therapist said that it’s going better than he expected. Our goal is to be on the bike after four months after surgery, so that will be end of January. Then I still will have one and a half months on the bike. Of course that’s not the perfect situation, but we are going to do our best. For sure I will make sure that I will be physically ready. I will be 100% ready when I start riding with the bike. I can make a good base training and also some strength training, so it will be just different preparation. It’s not so much bike time, but I think physically with the base I will be pretty good.

Is everything from that aspect with the training going to stay the same? I am guessing you are still going to be working with Harry Everts, but will be using Tomi at IceOne for the physical side?

Yeah, for sure. I will still continue working with Harry, just now with the physical condition… The physical training I change. I will work with Tomi. That will be one of the big changes for the next year.

The ACL surgery that you had, did the doctors tell you that you really needed that? Obviously some guys ride with a torn ACL for their whole careers, or five years or whatever, so was it the best thing for you to get it done straight away? Was there a chance you could have just continued anyway?

Yeah. My ACL was not completely off. It was still a little bit attached, so the doctor said for sure I can ride with that. I can try to ride, but I felt myself that the knee is not strong enough to be on the bike and to do proper training and proper riding. I’m still really young. If that would be one of my last years in my career on the bike, then for sure I wouldn’t do the surgery, but I’m still only 21 and I have still the rest of my career in front. Together with the doctor we decided that was the best thing to do to make surgery and to make really good preparation after to make the knee strong again, so my knee is good for the future. If I would ride with the broken ACL, then I could damage my cartilage and the rest of the ligaments. I still have to live after my career and that was also one of the reasons that I want to fix the knee straight away, so I don’t damage more things.

Obviously looking at expectations in MXGP, you never know how it is going to go. Presumably you have watched Jeremy Seewer this year, seen what he has done and thought that you can at least do that? That’s kind of got to take some of the pressure off your shoulders a little bit.

Yeah, for sure. I have been working on 450s a lot for sure. I don’t want to expect something too much, especially now with let’s say not perfect preparation, but I will do my best and we will just go race by race. My goal is to be 100% ready, let’s say, after fifth or sixth GP when it’s coming into May or June, when I will have more bike time and I will be more ready to battle with the guys. For sure, I will not go to the first GP to lose or give up. I will fight and I will do my best.

Just looking back on the season as a whole, are you happy? Obviously you lost the title, but do you have any regrets about anything you did in training, in the middle of the week or at the races? Is there anything that you wish you could go back and change?

No. I’m the guy who doesn’t look so much back, because after the season I just sit down with myself and talk about everything, but I have nothing to regret. Maybe I made some mistakes, for sure, but I don’t regret it. It is just a good learning experience. It’s a pity that I lost the title, but I think that will make me better for the future.

Jorge was really good this year. His starts are on point. He was always almost taking the holeshot, which helped him a lot. He deserves the title. You can see in the points. If I would deserve it, I would win it. He deserved it. I would not say that he was a step better than me or something. I think we were quite similar on the speed. He had much better starts. Maybe sometimes my speed was better and maybe sometimes his, but he is a great rider. I think also next year it is going to be tough for someone to beat him.