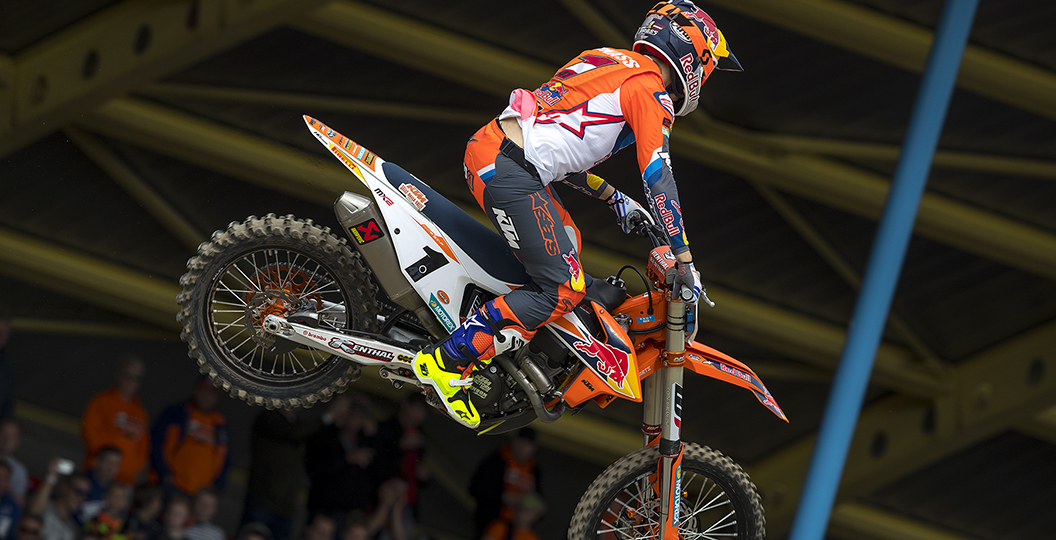 Pauls Jonass suffered yet another blow at the Grand Prix of The Netherlands and, even though he is still in the hunt for the title, it is most unlikely that he will become a two-time champion when the current term draws to a close. It has been a rocky road and this may be the most turbulent period thus far, as he is dealing with a knee injury that is really hindering his progress. All of that is explained in this exclusive MX Vice interview.

MX Vice: Bad luck again, really. This kind of just sums up the second half of your season. For some reason these little things keep happening that stop you from fighting for wins. Another frustrating day, I guess.

Pauls Jonass: Yeah. For sure it is frustrating, but after Turkey and after the crash with Jorge [Prado] I had some problems with the knee. I went back to the doctors to check it out. I had stretched the MCL and a little cut in the ACL, so the last two weeks I could not do so much and was just mostly laying on the couch at home. The doctor said you just need to rest the knee. Wednesday, I tried to ride the bike, but I just could do twenty minutes. This was already quite good. I took some painkillers.

I was all weekend riding on painkillers, which helped a lot, but still when you are two weeks on the couch it is difficult. The power goes away so quick. It is so difficult to get it, but it is so easy to lose it. Now I could feel really that in two weeks you can lose a lot. Today I was riding for one lap, maybe it will be okay, but still I felt that I did not have so much power in my legs and I could not squeeze the bike how I wanted. Just the bike was dancing around too much. I just could not control everything.

First race, crash in the start. I was just too late on the gate, so that was my fault. In the second race I got a pretty good start. Just the speed and everything was not there this weekend. Like I said, after two weeks of doing nothing, it is difficult to be able to fight for a win. For sure I was hoping for a better result, but it is how it is.

That knee injury was worse than you thought, then, because when we spoke in Turkey you thought maybe you would have to rest for two days, but it would be fine. That obviously was not the case.

Yeah, that was the thing. After Turkey even Sunday evening I felt okay. The knee was a bit painful, but not too much. Then day by day it even got worse. On Tuesday it was a bit swollen and on Wednesday when I woke up in the morning I was surprised how swollen it was. It was like my upper leg. The knee was so big. Now until this week it started to get day by day a bit better, but not so quick I wanted.

Obviously, this was a sand track. Everyone thinks of one of those as having loads of lines and being easy to make passes. This track is different though. How was it coming through in the first race?

For sure Assen is always difficult to pass. Man-built track. It was really one-lined, let’s say. It was quite difficult to pass because they also did a lot of work on the track. They flattened it a lot. If they would not flat so much the track would be rougher, so then you will search for more options. But here I think the problem is if they do not flat it, then the concrete comes out. We could see in some places the concrete was already there.

Backmarkers, they were a problem for the same reason. Just everyone was funnelling into the same line, right? I saw you get screwed by them a few times, but I think everyone did, so I guess that just is what it is.

Yeah, it is what it is. The back markers, it is always easy to say to move out, but it is also not so easy for them. It is how it is.

Obviously more points lost today, and now the championship looks not impossible, but obviously it’s quite far away. How are you dealing with that? Are you disappointed? Are you keeping that to the back of your mind until it is actually over?

Yeah, I am for sure quite disappointed. Now I will see how my knee is feeling tomorrow, because now it feels quite okay because I am still on the painkillers, but for sure I am disappointed. Tomorrow I am going again to do the MRI to see what is going on, if it is healing or not. We will see what they can do after.

Do you think there is maybe a chance you will just skip Italy then? Are you going to be there no matter what?

No, I would say I will be there. I never know what the doctors will say. For sure, I want to try to fight until then, but he needs to get only four points and that is enough. That is quite an easy thing to do, actually.

I remember interviewing you at RedSand and we were talking about how it is just going insanely perfect and nothing was wrong. Do you ever look back and wonder how it has turned out this way? I never would have predicted that you would end up losing the championship after those three rounds, because you were on top of the world.

That is the thing. I was feeling really good in the first three rounds then just bad luck came and then just the small issues. Could not train as much as I wanted. When you cannot train on a top level then you go down quickly, because all the guys are hard-working guys. If you skip one day, that is a lot. In the top level that means a lot.