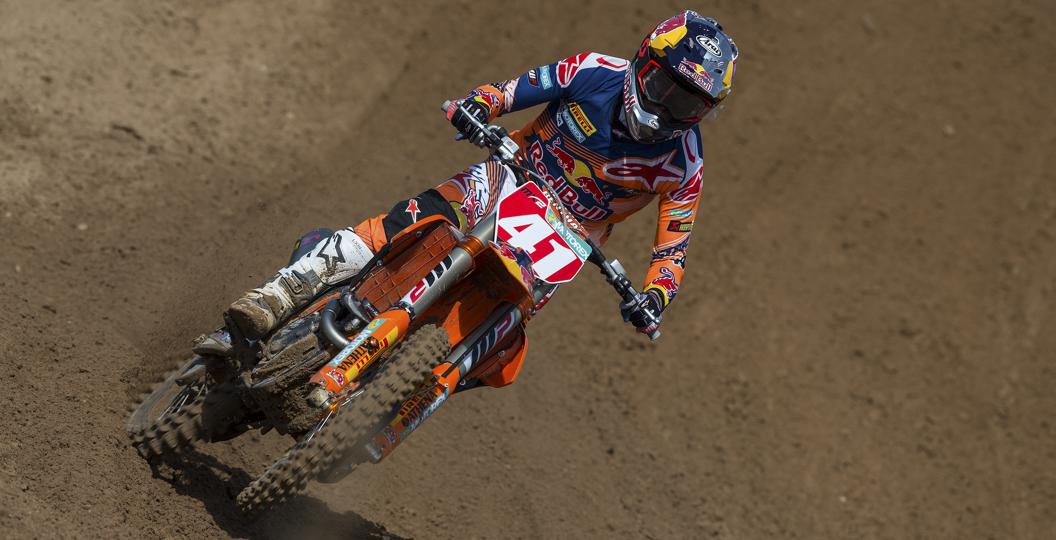 Things are not always as they seem. Pauls Jonass is a perfect example of that, as he actually struggled through the final portion of the FIM Motocross World Championship. Although he appeared to be invincible, as he strung together an impressive streak of podium finishes, there were issues behind the scenes that made it difficult for him to practice in the middle of the week. Jonass overcame that though, like a true champion, and claimed a well-deserved title at the MXGP of Pays de Montbeliard.

Firstly, I am really interested to talk to you about the Motocross of Nations. You skipped that because of a head injury that you sustained at the beginning of the season, right?

Yeah, you know, I had the bad concussion in Loket last year. I took two months off and it was good for the wintertime. I felt good with that! Then at the LaCapelle international race at the beginning of the season I had a crash, hit my head and again had a concussion. Since that time, it has been quite tough. I have been going to many races, but in the races it has been okay. Practicing has been very difficult though.

From the middle of the season to the end of the season I did like thirty percent of the practices, because I would do two laps and then start to get dizzy. It did not feel good! That was the reason why I skipped the ‘Nations. I spoke to the doctors through the season and did many scans, then they told me that I had to stop. But, you know, you don’t want to stop through a championship season. The main goal was to win the title and then stop as soon as possible. After the last round in France I did a few days of testing with the new bike, then I took six weeks off from the bike. Now I have been back on it for three or four weeks and it has been okay. That was a good way for the future, skipping the ‘Nations.

Was there any point then that you did not think you would be able to finish the season? Was there a particular race that was particularly tough to get through?

Did the doctors say that if you hit your head again, then it could become really bad? Did they ever warn you about something like that?

Yeah, for sure. It gets worse and worse after every concussion that you get, so they said that after the next concussion it could be really bad or no problem. The head is quite complicated and that is why not many doctors can explain it.

Do you think that is why you ended up so smooth and consistent this year? You knew that you could not crash and hit your head again.

I do not know if that was the reason. After the crash in Loket I had a lot of time to think about it, as I had two months off of the bike. I spent a lot of time alone to think about everything and after the crash I changed a lot. I have been smooth and not crashing as much, but even in the wintertime I worked on that. The goal before the season was to just be in the top five at every round and then it would be good at the end of the year. I got fifteen podiums, which was actually more than I expected before the season, so that was pretty good. I think consistency got me the championship.

Yeah, you have to be really happy with how it all went? I cannot think of one round where you struggled, no matter the conditions.

After you took the time off over the ‘Nations, will you be fine now? Is there a chance that you are still going to get dizzy in practice?

When I went to the doctors for a check-up after the season, they said they could still see some low things on my brain. They said that normally it should not be a problem, but I have done three or four weeks of riding so far and that has been good. Hopefully it stays like that and I will not have a problem next year.

Obviously a lot of people have been talking about you lately, because you split from Marc de Reuver. Talk us through that decision and what made you go that way.

Yeah, we did some really good training with Marc in the wintertime and he helped me a lot. I am really thankful for him. I could not have asked for better training in the wintertime. Towards the end of the year and especially after the season, I sat down with my father and manager to discuss the season and the future. It was at that point that we made the decision to split from Marc, because I want to become a little more independent and make my own decisions to be myself on the bike.

I need to grow myself to be ready for the MXGP class as well, because you can see how smart the riders are in that class. You have to make really good decisions at the right time. That was the reason, because I want to learn by myself and make my own decisions.

I saw something that goes along with that. You were going inside after pit lane in the mud at Villars sous Ecot and hitting the same rut every lap, but then they put on your board that you should go outside and you almost crashed trying that. Is that what you are talking about? You just want to make your own decisions on the track, right?

Yeah! That is exactly what I mean. I just want to ride my own lines. I am twenty-years-old and, sure, I am not as experienced as some of the older guys. Still, I need to make my own riding style and my own decisions. That is the reason.

It must have been nice for you to get back with the Everts family too, as they already know you well from your first season in MX2. Did that make the transition much easier?

Yeah, for sure. I was really happy to work with Stefan and Harry when I was with them in 2015. They helped me a lot, you know, and were the people who helped me grow as a professional rider, because I went from nothing that year to now being a world champion. I really liked the way that they worked. Harry is living in the same village as me, just three minutes away, so I am really happy with the way things are going so far. The communication and everything is really good, so I am looking forward to a bright future with them.

Obviously when you were battling with Jeremy Seewer this year, you were almost fighting against Everts. The whole family were really close to him. Was that hard for you, battling against someone who knows you inside and out?

It was difficult at one point, because Stefan knew me really well. We had a really close relationship when we worked together and for sure he knew my strong points and weaknesses. Sometimes it was a little bit easier for me though, because I knew what Stefan was going to tell him. There were some points in the race where Seewer would make a move and I would be like, “This is a Stefan move.“

You are obviously going to be the favourite next year, but it seems that Jorge Prado may be your greatest challenger. You already raced him pretty hard this year and you both said some things afterwards, so how is that relationship now? Are you still a bit mad about some of the moves that he made?

No, I am not mad at all. We were teammates, but everyone wants to win when they get onto the track. We were good teammates and I enjoyed battling with him. I am really looking forward to next year. It will be tough, because I will be one of the favourites and have the number one on my bike. Everyone will want to beat me. Everyone says it is more difficult to defend a championship than it is to win the first one, so I will make sure we are ready for it.

It must be nice to know that you won it against a deeper field this year, because Jeremy Seewer and Benoit Paturel were in there. So, if everything goes to plan next year, there is no reason to think that you cannot do it again.

Yeah, for sure. The goal will be the same going into next season. I want to be consistent at every round and get as many podiums as possible. It was a good year and I got the monkey off of my back with my first title. I think I will go into the next season a little more relaxed, because I reached my big goal. I want to win again next year, for sure, but we will see. Maybe it will be easier, but maybe it will be tougher. I am going to work really hard to be on the top again next year.

Finally, you mentioned there that you are going to run the number one plate. Was that an easy decision to make? Some people think that it brings bad luck.

I actually thought about it for a long time. I think I was struggling to make a decision between forty-one and the number one for a month. It is something that you can have once in a lifetime, so I want to use it. Not many riders have done it, but I think it is nice to have it on your bike. All of the spectators and fans can see that you were the best from the previous year. Maybe it brings extra pressure and makes it tougher, but I think it is actually extra motivation to keep it red for the whole year.