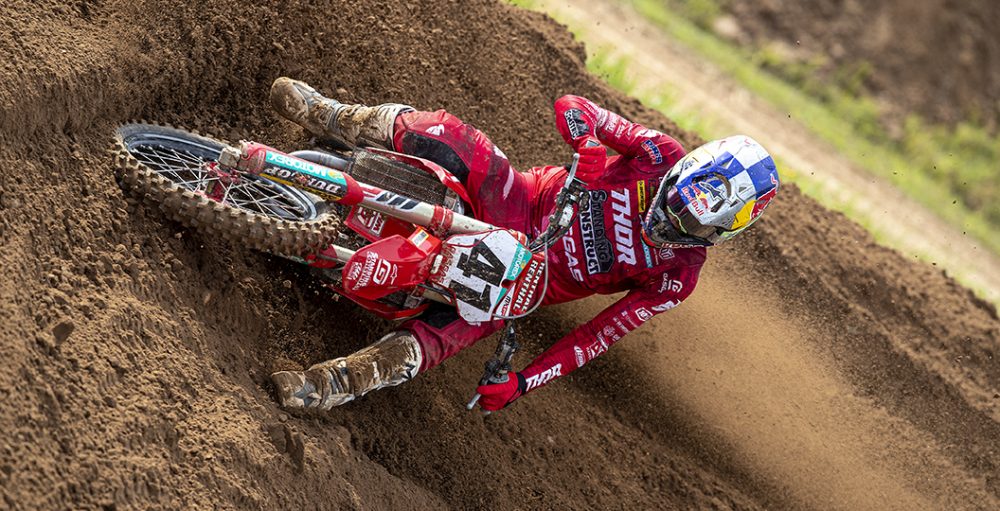 Pauls Jonass’ results have not been a true representation of how he has performed through the first seven races of the 2021 FIM Motocross World Championship. The Grand Prix of Latvia, round seven, was no different, as his speed was rather impressive. Much more impressive than a ninth overall would lead one to believe. Jonass’ pace is discussed in this exclusive MX Vice interview from the event, along with his status for the upcoming Motocross of Nations.

Jonass is seventh in the championship standings, a positive position to be in after such a horrid term last year. It is easy to forget that, entering the season opener in June, Jonass had not raced in 16 months. The comeback trail is still a path that he is negotiating and that means he will almost certainly get better with each week that passes. The support from Standing Construct GASGAS Factory Racing will be a big part of that progress too.

MX Vice: Not the home Grand Prix that you would want, but you were fast in the second half of that first moto. You really showed something and that was another step forward, I think.

Pauls Jonass: Yeah, for sure, and home GPs are always tough, so I just wanted to have two solid motos. Sixth place in the first one. I was happy with that, especially the riding in the second half of the moto. I got a quite alright start, not the best one. I was struggling in the first minutes and was too aggressive – too much braking in the corners and too aggressive coming out. It took a while to get a rhythm. [Romain] Febvre passed me and I tried to follow his lines a little bit. After 15 minutes, it felt like something changed and I could ride easy. I caught the guys in front and managed to pass Glenn [Coldenhoff] in the end. The first moto was quite good. It was unfortunate about the second moto, but that is a part of racing.

What happened to you at the start of the second moto? I missed the start. You were coming through and then you got cleaned out bad. It was bad.

That was quite a bad take out. I was good at the start – I was top three going into the corner. I do not know exactly. I still need to see a video; I touched the wheel of Romain or something and then I went down. It was quite bad. With the rain and everything, coming from behind is always tough. I came up to like fourteenth place, I think. [Henry] Jacobi cleaned me out. That was quite bad. My gloves were wet afterwards with the sand and everything. The bars were bent with the levers up and down. I tried to survive, but had another crash in the waves. It was also a big one.

You went down three times in the second race then?

Yeah, three times. The last one was 100% my fault. I just tried to double in the waves and got a kicker, so went into a front flip. That was unfortunate. I scored some points in the second. I finished fifteenth even with three crashes. It could be better, of course, but that is a part of racing. We are learning and I am happy with how I am feeling overall. Like you said, the first moto was good. The speed is good. The fitness was good today. I just need to get rid of the bad luck, but now we have some time to turn it around.

Did you feel a lot of pressure today? Home Grand Prix and you missed it last year, so did it feel a little different to you?

No, actually. I was expecting… Years ago I felt the pressure from the fans and everything. Now I was enjoying it. The home MXGP is always tough for every rider. I just tried to stay calm and do my best this year. The guys from the team are amazing and do not put any pressure on me. They just said, “Do not mess it up at your home GP. Stay calm with no stress and the result will be good.” Everyone is happy if I do my best and that is what I always try to do. I do not put the pressure on my shoulders. I just go out and try to do my best in every single moto.

The ‘Nations is less than two months away. What are your thoughts on it? I hate to break it to you, but Latvia is not going to win.

I am pretty sure it is not going to happen, so would you want to go? You would kind of be going for yourself, but you would not get anything from it.

Maybe Latvia has better riders who they have chosen instead?

Probably! We will see when the time comes. I am not against it. There will be so many races in a row at that time, so it is one extra race. Mantova is not my favourite track. We will see what happens in the next few weeks.

That is the biggest thing. If you do the ‘Nations, then that is seven weekends of racing in a row. You need that weekend off, along with everyone else.

Yeah, that is the thing. The week before is in Riola! That is a really tough track. Everyone says that Lommel is the toughest track in the world. Well, wait until you see Riola. That is a nightmare. After Lommel I needed three or four days to recover. After that one I will need a little bit longer [laughs]. We will see. Now we have some weeks off, so it will be good to put some time on the bike and do extra physical training to get ready for the end of the season.