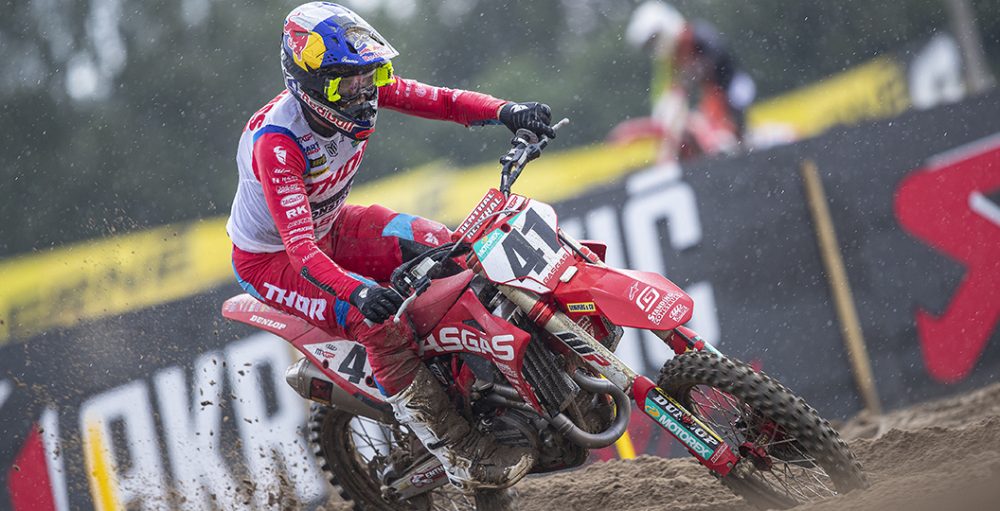 Pauls Jonass has been somewhat of a revelation in the 2021 FIM Motocross World Championship. Following a horrid year of injuries, he finally returned to the overall podium at the Grand Prix of Flanders-Belgium and led his first laps in the premier division too. It was Jonass’ first podium finish in 684 days, to be exact, with the last being in Turkey in 2019.

Jonass recapped his transformation with the Standing Construct GASGAS Factory Racing team in this exclusive MX Vice interview, as well as revealing an interesting point about his engine package. It’ll be most interesting to see what Jonass ends up doing in 2022 – that titbit about his engines could be an indication. This interview was originally posted as an MX Vice post-race podcast, presented by FLY Racing.

MX Vice: Not surprising that you are on the podium, as you have had podium speed all year. You finally got starts and good things happen when you are near the front.

Pauls Jonass: Yeah, for sure. Last week I told you that we were going to change some things – that worked out for the start. It is so much easier when you are up front on the first lap. I was not riding that well in the first moto; I had some issues, just struggling with the rhythm and everything. It felt so good to lead some laps in that second moto. The team told me that I was leading the overall at one point too, so that is cool. It has been a long time since I was last on the podium. I just need to give a big shoutout to the whole Standing Construct GASGAS team. They have done a really amazing job – they believed in me. The atmosphere in the team is amazing. They are there through the good and the bad. I have been enjoying the process, so I am just looking forward to my home MXGP now.

You have not led laps in a long time. Being up front in the second moto, did you almost feel like a rookie again? Were you a bit nervous or did it come easy to you?

I felt good when I led in that second moto. I got my rhythm and everything. It felt alright. I was more surprised and nervous when I got the good start in the first moto. I was like, “Hey! What do I have to do now?” I think this is just a good confidence booster. I am not sure if I have led laps in MXGP. This could be my first laps led. I led the qualifying race in Latvia, but I think that those were the first laps led in the actual races. That is a good thing to put in your statistics!

What did you think of the track changes? You did not race here last year, but the start was much safer this time. I just thought the new section was a bit one lined.

Yes and no. The start was safer and nicer, for sure. The first few corners were one lined, like you said, but we just went outside and cut the corners in the end. The inside got so rough and deep. Overall, the track was really soft. The jumps were quite big and when you landed to flat. You had to shift down on the straight on the 450F, because it was so deep that it sucked you in. I have trained here in the winter many times and it is never like this. The bumps are completely different and so are the lines. It was tough, but it is nice when they are just the MXGP and MX2 classes. The bumps are more for us and our speed – they are not as short and rounder. We can carry more speed. I enjoyed the track.

What can you tell us about your bike? Standing Construct is a full-factory team, but they have done their own engines in the past. They do a good job. Do you have a full-factory engine?

No, Wim is the magic man with the engine.

I hear that he is really good.

He is doing an amazing job. Whatever I ask for, he always tries to help. Everything is made just the way I like – I am really happy with the bike and how everything is reacting.

This must do a lot for you going forward. You have fixed your starts, led laps and you have momentum now too. This is almost like a fresh start. You can move forward and do it again!

Yeah, for sure. It is a big confidence booster heading into my home MXGP. I will try to put it on the box over there too. It is nice to be up front again. I was a little bit sick before Maggiora, so I was not sure if it would be easy here. It was good. I felt good. I was looking forward to the little break after Latvia, because I can put the good work in to be fit and ready for the end of the season.