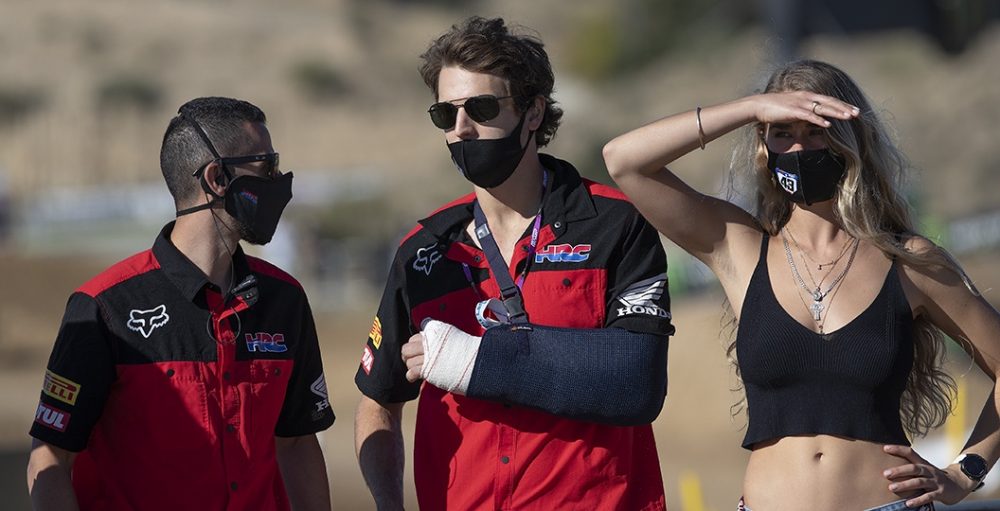 Mitch Evans crashed at the Grand Prix of Spain, round twelve of the 2020 FIM Motocross World Championship, and sustained a wrist injury, so his first season on Team HRC has ended prematurely. Evans still stuck around to discuss that injury in an exclusive MX Vice interview, as well as his new contract with the folks at Honda Racing Corporation. There are a few jabs and laughs in this interview, which has become a regular thing in chats with #43.

MX Vice: Emotional interview, as it is our last one of 2020. You are done. Crashed over the big double before the second-to-last corner in the first moto and did your wrist in. Talk us through it.

Mitch Evans: Yeah. I just misjudged it a little bit, missed the acceleration bumps before and had a little bit more speed than normal. I just over-jumped it. The impact was so hard that the forks bottomed out and blew both hands off the handlebars, then I just kind of laid her right into the fence. I kind of knew immediately that it was broken. I just got up and headed back to the pits to get some x-rays. It was confirmed that it was broken. We head back to Milan tomorrow [Monday]. We will get some more scans to see what exactly has happened, what we can do to fix it and look forward to next year.

It is probably too early to ask this, but you just made me think about it. The shoulder was a big thing. You went back to Australia, because of COVID as well. With something smaller like this, are you going to go home or just stick around in Europe?

No. I think if I were to go back to Australia then I would have to quarantine for two weeks. We looked at it a little bit, but you have to stay in a hotel. I can get rehab here and whatnot. I will be moving places as well, so I think it will be best to just stay here in Europe.

Let’s stick to the positives for a little bit. It was only like four laps before you crashed, but what a time! You were going forward. Who knows? You were all over [Jorge] Prado. Maybe if you had got him, the story would have turned out differently. You definitely had the pace.

Yeah, definitely. I felt really good right from the start. I was P1 for almost the whole session in qualifying. I came to this track and, when I walked it yesterday, thought it was kind of like Matterley Basin, just on a smaller scale. I felt really good right away. I got off to a not-so-good start but made some passes really fast and just felt comfortable. I was just pushing forward. I made a few mistakes, so Tim [Gajser] and [Romain] Febvre got me. I wasn’t too worried. I was just going to settle back in and make a charge a bit later on. It was just a silly mistake. I do not really know why it happened, but it is what it is.

I feel like we need to clarify one part of this, because I think it was on television. You came up short the lap before you crashed. You didn’t then crash after that as you were like, “I don’t know how fast to hit this jump?” That wasn’t it, huh?

No, not at all. I came up short the lap before, because Febvre made a mistake and then he came up short. If I had kept going a normal speed, then I would have landed on the back of him. I had no choice but to come up short – that had nothing to do with crashing the next lap though. I was off the normal line that I was taking and misjudged it.

More positives. Your deal’s finally been announced. You can finally talk to me about that! Enough of your stupid games. It’s a multi-year deal, but they did not say how many years it was. I’m guessing you are not going to tell me that either. Three? I’m going to guess three.

I was told not to say.

Is it really a secret?

I saw on one website that they mentioned how…

HRC put out that it was a multi-year deal and that was it. Probably another website made it up. That’s kind of how things go in Europe.

You are not going to tell me, but a multi-year deal is a good thing. Not a one-year deal like you had this year.

Exactly, mate. You have got to put up with me for a bit longer.

Well, I was going to thank you for putting up with me. After all, this is our last interview of the year.

Maybe you can invite me to England, so that I can come over?

I would love to see your reply if I invited you to England. I’d imagine it would take two weeks to reply and then it would say something like, “Nah.”

Who knows? I have got some time on my hands now.

I’ll be in Belgium if you want to hang out next week.

No. I’m kind of glad. Miss the rain there and cold weather.

Actually, you skipped Lommel last year as well. When are you going to pop your Lommel cherry?

You know what? I have not even actually ridden Lommel yet.

Really? Surely not. Everyone rides Lommel. You are an MXGP rider!

I know. Maybe it’s a sign. Maybe I have just got to go and ride Lommel, then I’ll be good and I will not miss it every year.

Maybe you are just doomed to never go to Lommel and the sooner it comes off the schedule the better, huh?

Come on, mate. What is this interview?

You turned this off track. I’ll make it positive again. You are a hot commodity in MXGP, I think it’s fair to say, especially after the first round. You obviously proved a lot there. HRC signed you, but was there interest from other teams?

First of all, thank you. That’s very nice coming from you. There was a bit of interest from other teams, so we were not too worried about what was going to be for next year.

I guess it’s HRC as well. There was interest from other teams, but this is the place to be.

Exactly. This new bike is really good, and we have already built a one-year relationship with them. I already have the bike sorted, so it was my first priority to stay here. I’m happy to be staying here.

That’s it. Last interview of the year. Any closing words to the fans or anything?

Thanks everyone for sticking by me. It’s been very high and very low throughout the year. We learned a lot, so we’ll come back and be strong for next year. Thanks.