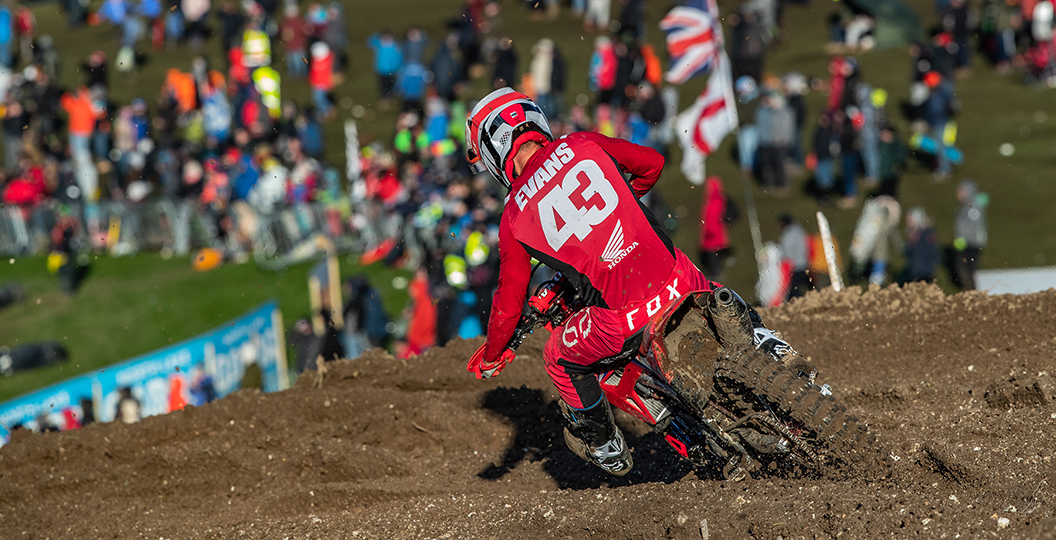 Mitch Evans came out and made a statement at the opening round of the 2020 FIM Motocross World Championship. Not only did he give Jeffrey Herlings a bit of a run in the first premier-class moto, he then proved that he could charge through the field in the second outing. Things are moving quite quickly for Evans, who has become a contender overnight, so MX Vice editor Lewis Phillips caught up with him on Sunday night to discuss that and the future.

MX Vice: I think that as far as 450F debuts go, this was pretty solid. The difference is we all expected this, because you have already proven you can do it in the pre-season races. Maybe the shock factor isn’t there and everyone is not going to rave about how amazing you were today, but truth is you were amazing. I feel like that might be the nicest thing I’ve ever said… I take that back. You were okay.

Mitch Evans: Yeah, after listening to your podcast, that is the nicest thing I’ve ever heard. I think a lot of people still doubted me after those Italian races, because not everyone is there. They are shorter races and whatnot. I knew I was pretty confident after them. The guys said to me, “Just take it easy. It’s your first round. Just get some good points and whatnot. There’s a lot of fast guys here,” and they were naming names. I said, “So what? They all got one heart and two feet. What’s the difference to me?” I don’t care what their name is. That’s the way I look at it. I knew I had a really good off-season. I’m in a much better position physically and mentally than I was last year, so I’m really enjoying my training and my time off the bike a lot more.

That first moto, you obviously moved forward quite quickly and somehow took two seconds off of [Jeffrey] Herlings in a quarter of a lap, which no one does by the way. You got to him, and then you immediately stepped back. It was almost like you were like, “I’m going, I’m going, I’m going… Oh, shit. No.” Did you pump up when you got to him?

No. Not at all. But from listening to his interviews I think it sounds like he’s matured a little bit in that aspect where it’s like, “I don’t need to blow everyone’s doors off by a minute.” He was kind of just setting the pace a little bit. I caught him and my pace was good at the start there, but I kind of got to him and my thought process was, “Okay, this dude is really fast. If I pass him, I’m going to have to set the pace and he’s just going to match me.”

I thought, “I’ll try and sit in behind him and just whatever pace he sets I’ll try and follow that.” I made a few mistakes after that, after he saw that I was really close. If you look at the lap times, he dropped his lap time by like three seconds and pretty much blew my doors off. It wasn’t a pace that I was willing to try and commit to at round one. Like I said, it’s a long season and I just wanted to get some good points. It’s going to take a while for me to learn that pace and be comfortable doing that every lap.

Happier with the second moto or the first moto?

That’s a tough one. I was happier with how I felt riding-wise and physically in the second moto. First moto I struggled a lot with my breathing. I felt like someone had a twenty kilo dumbbell sitting on my chest every time I breathed in heavily. That was pretty painful. Second moto I felt better. Just a little bit bummed about that start, but at least I showed that I can come through the pack and still get a decent result.

Bummed that you weren’t on the overall podium or is it more a case of thinking, “Nineteen more of these things?” It’ll happen.

I guess everyone else has got two feet, like you say, so why shouldn’t you have been up there?

Yeah, exactly. I lost my streak of at the first round every year I land on the podium.

I was thinking if you got on the podium today all anyone is going to say is he’s just a first round guy. Maybe it’s good you didn’t.

Okay. Thanks for giving me something.

Are you sick? Have you got Coronavirus or something? Are you feeling yourself?

I’ve just slagged off riders all over the place. I haven’t got any more of that left. I guess you have heard, but my theory is that I wish the pre-season races hadn’t happened. We are going to look at other rookies and when they finish tenth then they will be celebrated. You finish tenth now and everyone’s going to be like, “What the f**k? He’s not as good as he was in Italy.” I feel like that changed the game a little bit for you, but then at the same time it also kind of gave you the belief that you could do it.

Honestly, I don’t really care. I have not put as much thought into it as you have because I don’t care what other people think. That sounds like one of those things where you just sit on the toilet and you are in a daydream just going through something. No, like I said, I don’t care what anyone else thinks. Just as long as the people in my team believe in me and I believe in myself, we can get the job done.

Do we need to call Roger [Harvey] over here now to sign the deal for next year, or do we want to do that later on? I’m available every round, so just call me and I’ll oversee this thing.

I don’t know. Maybe I wait until I win a moto, then I’ll ask that so they can sign me for some big figures.

That new bike is phenomenal, right?

Mate, unreal. What can I say?

Did you properly test the old bike? I guess not. You raced it in Japan, didn’t you?

Yeah. I tested the old bike. I raced the old bike after two days of riding it in Japan. I was surprised at how good it was. I rode two months, one and a half months before I went back to Australia, and then when I came back here I rode it for two weeks before we started testing on this new one. The old bike was really good, but this one’s a big improvement.

Last thing, you are clearly much healthier this year. You are not having to kill yourself to ride a 250F. Not only on the bike, but off the bike you are in a way better spot too.

Yeah, for sure. I’m actually lighter this year than I was last year.

How does that work?

Honestly, I have no idea. I have pizza once a week and ice cream here and there – maybe every night. No, it’s good. That’s what I mean. When I try to lose weight, I end up being heavier than what I am when I just eat normally and do what I want and enjoy life. Like I said, mentally I’m in a much better position this year and I’m really enjoying everything. I’ll wake up every day and I want to train. It’s a good feeling.