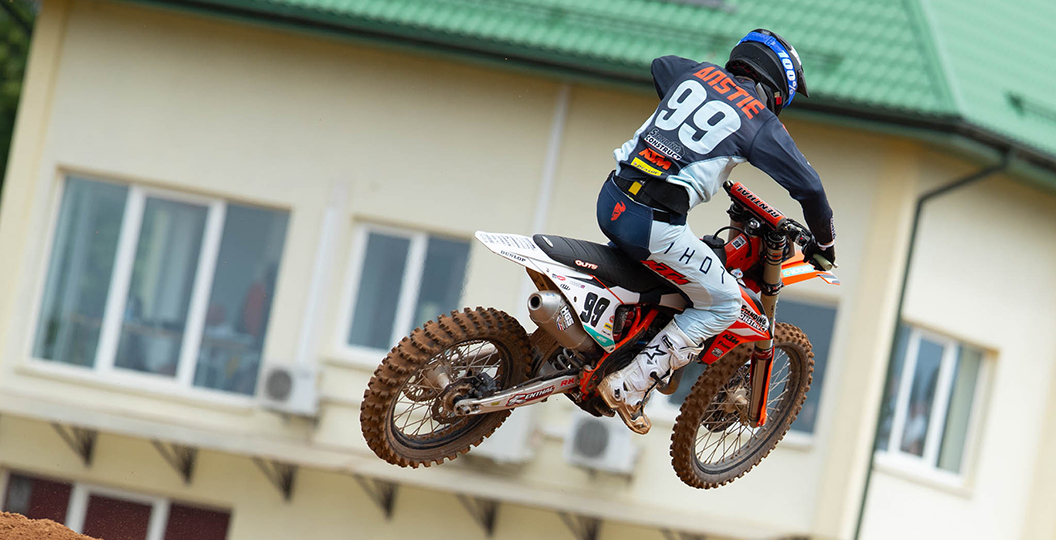 Max Anstie is finally back on track and moving towards the head of the field, but there were still hiccups at the Grand Prix of Latvia. What happened? Anstie ran through his time in the sand of Kegums, in a lot of detail, in an exclusive MX Vice interview on Sunday. If even more detail is required, click the link above to hear the audio version of this discussion. Anstie is always entertaining!

MX Vice: It was a good and bad weekend, I think. There were definitely some bright spots where I thought it was going to happen. The results were maybe not what you wanted, but I definitely feel like it is kind of going in the right direction.

Max Anstie: Yeah. It’s a tough one. I had a tough weekend, to be honest. I like the track. I liked how technical it was and things. It just did not really happen. Yesterday I struggled a lot. I messed up in the morning. I must have had something at the hotel. It has been a long time since I have been, should we call it, ill. I didn’t necessarily feel sick, but it was just coming out of the other end. I was clamping. You get what I mean. I did about ten minutes and I felt like I was going to poop.

In all seriousness, it was not very nice. I struggled a lot yesterday. My stomach was hurting. Last night was not ideal. I wouldn’t want to be the maid in our hotel room, but then today I felt better. I felt alright, but I don’t know. I did try and drink a lot. I had Imodium and all that sort of stuff. It just did not really go. In the first moto, I pushed as hard as I could. I did not get the greatest of starts. I cannot even remember what happened.

The first turn here we were all sort of hitting each other. It was annoying, because I wish I could have had the starts Ivo [Monticelli] gets. He gets brilliant starts. I do not know what I have been doing. I know we have got the potential to do it, but it just does not seem to happen. I fought as hard as I could and got through. I think I finished ninth in the first race. I was really looking forward to [the] second [one]. I was like, “Right. Come on. I’m going to get it on.”

It was just again a bad start and a bad first lap. I just felt flat. I just felt like I could not make up time or push. I was trying. I do not know if it is still the effects a bit of yesterday. I just feel a bit not very good. It is a weird one, because I do like this place and I like the track. I guess I am just going to have to go back to the drawing board and go again next week in Germany. Again, I have been good there. I have won around here on a 250F and I have won motos in Germany before, so I do know that I feel good there. I have just got to work and get on it.

I feel like the first half of that qualifying race was like the ultimate example of what you can do, because you went from twenty-second to twelfth and probably would have got to sixth or seventh had you not had the poop issue.

Yeah. I did ten minutes. The waves were not helping. All those waves, every single one… I finished yesterday and they just said, “Well, if you feel like that tomorrow just sort of let it go.” I was like, “Wow. I don’t know about that.” I don’t really want to be the one to clean up. My fiancée has to clean my gear, so I am not really sure how she would have felt about that. It was not ideal. There were parts of the weekend where I did feel good.

It has just not come together completely and I do not really know why, because I do feel good. I feel good with the team. I am really happy. My mechanic and I, we do so much work and I am comfortable. I feel good. Each day in the week we are pushing hard. For some reason at the weekends we are not really clicking, but I have only been back a couple now since I had a few injuries.

At least I didn’t fall off this weekend! Well, apart from in practice first lap when I missed the handlebars after pulling a tear-off. It is alright. I have got to be better. I have got to step up now for Germany and into Indonesia. I have had good bits and bad bits of the season, but I just need to pull it all together to make some good bits for the rest of the year.

It was not very bumpy. It was bumpy, but it was fast bumpy. It would have almost been better if they would have left it and then the track would have become slower, because the braking bumps and things… They were not that big. There were a lot of acceleration bumps. Hard-pack, sort of sketchy square-edge things. That is fine, but we were hitting them pretty fast. If they would have left the track… It just seemed like they built up some berms for MX2 and then it was just wide open, smashing into berms and next to berms.

You just really had to be on it with the intensity. I am not going to complain. I thought the track was quite good. With the waves section, it was a bit more technical. It was alright. They did flatten that, so it made it pretty easy for the moto. It is what it is. I would have preferred it if they left it bumpier, so that it would have slowed things down and made people a bit more tired. I felt like everyone was just wide open the whole moto. That was probably because I did not feel that great.

Are you at one hundred percent now? I am guessing if not, you are getting there?

Yeah. Obviously yesterday was not really to do with anything. I did not feel one hundred percent really yesterday. I don’t know if that has taken effect on today. I am fine. I feel good. I feel solid with everything. I am lucky the Alpinestars guys done a good job. They gave me a really good arm pad, so I have been riding with that now to protect my arm if I do land on it again. It is good. I have got a good group of people around me. I feel good. I have been able to train. No excuses. Just need to get on it.