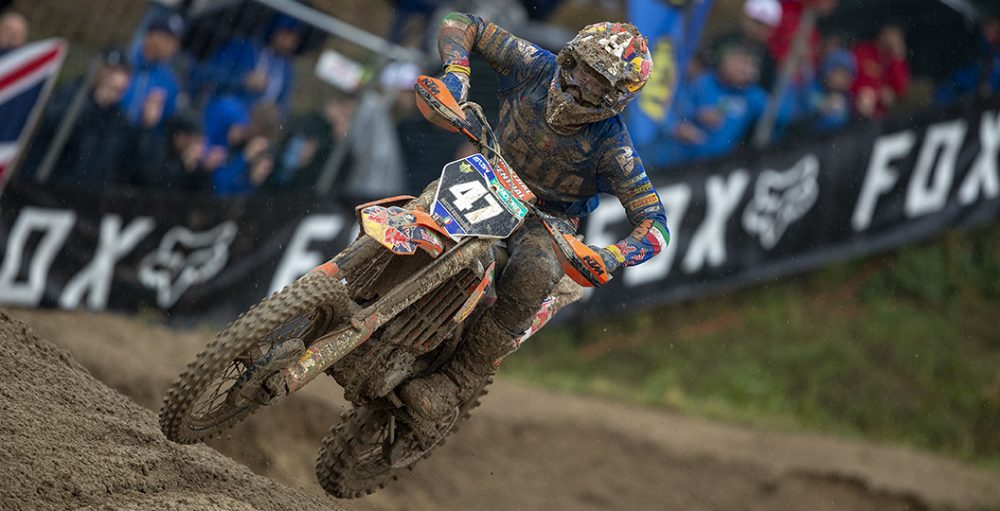 Mattia Guadagnini continued his impressive rookie term with Red Bull KTM Factory Racing over the weekend, as he arguably led Team Italy to victory at the 2021 Motocross of Nations. 5-6 moto scores (2-2 in comparison to his fellow MX2 riders) were very impressive. Many different riders have struggled with the pressure and crumbled in their first Motocross of Nations. Just imagine how magnified that stress would be on home soil!

Guadagnini discusses the win with Team Italy – the nation’s first since 2002 – and so much more in the exclusive MX Vice interview below. Alessandro Lupino’s penalty is touched on as well, seeing as Guadagnini watched that unfold from pit lane and went through the motions with fans worldwide. It was not straightforward for Team Italy! This interview was first posted as an MX Vice post-race podcast, presented by FLY Racing’s Formula helmet.

MX Vice: You got it done with Team Italy and played a massive part in their win. You could have felt the pressure and crumbled, but I was actually really impressed with your rides.

Mattia Guadagnini: Yeah, this is just the first time for me. It is amazing! We had a strong team in the last few years, but Italy did not have the best result. We were a strong team – three strong riders and good friends – in Italy. This is something really special for me and everybody. I gave my best. I made a mistake in race two, which cost me some points and positions, but we did a good job and we came out with the win thanks to the hard work of everybody. That is what counts! I am really happy and I want to thank everybody in Team Italy who made it possible.

Yesterday was completely like a GP. We rode with the MX2 riders and it was just like a normal race, with some riders missing. Today was a bit different. It was the first time for me and I was under pressure. I did not really know how it works at the ‘Nations with the start and gate choice. It was a bit strange for me. I just managed to take two good starts – that was really important with this track. I just gave it my best and they also did a really good job. We did it! That is the most important thing.

How stressful was that last race? It came up on the screen that a penalty was pending, something that I have never seen them do. There were rumours about disqualification and all sorts. How stressful was it for you?

It was… It was really stressful. I was in the pit lane and I was trying to understand something about the points. We were leading with a big gap and then I saw the penalty. I remember that I saw Alessandro [Lupino] go out of the track on the start. I did not really understand anything! We came out with a ten-place penalty, so he needed to pass some riders. It was really crazy to be out there. I think it was worse for them, but for me to watch… I do not even know what to say! The last lap was like a never-ending lap. We understood that it was done, so all of the stress went away. I am just so happy.

It is crazy that we are only halfway through your rookie season. You have already had a Grand Prix win, the red plate and now a Motocross of Nations win… You obviously had high expectations coming into this season, but this is unbelievable!

It is unbelievable, yeah. There were many, many years that Italy did not win and it came out like this. Even to get selected for the Motocross of Nations was a dream for me! To get the first win in my first time, and in Italy, it is just crazy. Really, really crazy. I could not be happier at the moment. I am really thankful for everybody and hope to keep it like this. It is already something really, really good. It is okay like this!

Running numbers one, two and three at RedBud is going to be pretty cool as well…

Wow! Yes! I hope to be in the team next year. We will see next year [laughs].