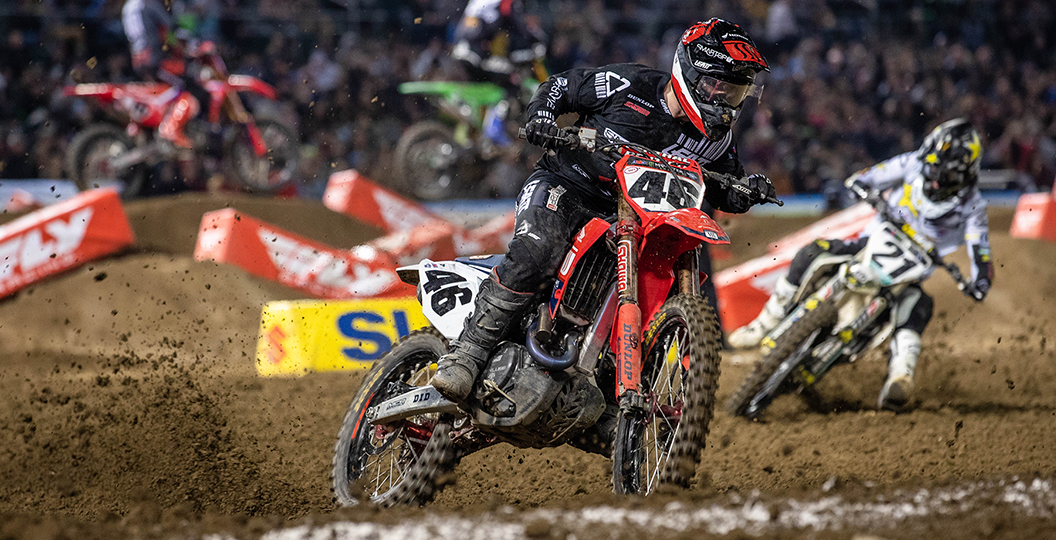 Justin Hill made a significant step in the right direction at the fifth round of 2020 Monster Energy Supercross, Oakland, as he won a heat in a commanding fashion and finished eighth in the main, his first top ten finish of the campaign. What led to such a turnaround? MX Vice editor Lewis Phillips caught up with Hill at the RingCentral Coliseum to discuss that and the fact that Tony Alessi really is a guru when it comes to starts.

MX Vice: I guess you really were sick of getting elevenths and twelfths, because this was quite the turnaround. Even from the beginning of the day you just looked like you had “it” out there. I don’t know what “it” is, but it’s a good thing.

Justin Hill: “It” is just me being me and finding little things out there that make me happy, and finding little things that I can use my technique on. Tonight lent itself to more technical riding, and that fits me. It fits me well. Ultimately I’m happy with where we are right this minute to where we were seven days ago. When I talked to you last, I was much more frustrated than I am right now. The cool part about this is I think I know what I did. When you do something good and you are like, “How do I do that again?” That’s also frustrating. I just really feel like I know what I did. I’m just going to keep going in this direction.

I had a lot of fun on the bike this week. I really tried to tap into who I am as a rider and not try to blend in to the same programme with the same guys. I have this joke that me, Vince [Friese] and Malcolm [Stewart] are like when women are together and their menstrual cycles link up. That’s my running joke. We start mirroring each other. I’m not them. I’m me. I need to shine as me. That’s kind of what I did this week. It’s been a great time riding with those guys day and day out. It’s a really fun team to be part of. They are cool guys but I just tried to focus on who I am as an individual and it showed this weekend. It really did.

Did you actually tweak things with the bike this week, then? Was it more of a personal thing or a bit of both?

I didn’t touch a clicker. We changed gearing basically just because the factory Honda guys changed gearing and went this direction, and Malcolm went this direction. I just said, “You know what? I think that fits my style too. Let’s try that.” Nothing extensive. There wasn’t a problem. That’s the tough part about this. This is going to sound crazy: Half of the reason you find yourself in a rut sometimes is if you are on something so good and you are not doing good then it’s like, “The bike is good. What’s wrong with me? How do I change this?”

I don’t want to change the bike. I don’t want to screw the bike up. It’s really good but just this little thing… I don’t think the gearing gave me a huge confidence. I think it helped on the starts a lot. My starts were fantastic this weekend. I got the holeshot in practice and the heat race then won the heat. That might have helped the starts. I think we are just going to keep it as is. The bike you see here is the bike I race next week, likely. Hopefully we just keep this upswing going of me tapping into who I am and progressing.

I think your starts were maybe the most impressive thing tonight. You don’t get good starts. Tampa two years ago – that was a good start. Since then, nothing’s really coming to memory.

A top five start, maybe. That’s fantastic for me. I have two starts on record that are holeshots. Only one main event. In the 2014 East/West Shootout I took the holeshot and won. I have that holeshot cheque, but that’s the only one.

If only they gave them out for heats.

If only they gave them out for heats I would have two on record, but I really still only have one on record. I impressed myself with the starts. I think the gearing helped. Tony [Alessi] is always drilling with us.

Yeah. It’s real. You think, “There’s no way he’s this guru that just has this secret sauce,” but seriously if Tony is within a meter then we are getting good starts. He’s just standing there. That’s also another running joke is that he’s just around and we get good starts. I’m hoping to go out east a little bit, change up the programme, keep evolving and keep finding me. The next few rounds should be good also.

The gearing helped with starts. Do you think fifty percent of it though is maybe a mental thing? Like you said, you came in today and you were feeling it. You knew that whatever you did this week worked. Was there just this little thing where you were sat on the line and you were like, “I can do this, and if I do this, I can stay there. There’s no stress at all.”

I’ll put it to you this way. I don’t know if you have ever lined up on the 450 start gate with all the bikes like that – and there’s fifteen champions to your right and left – but it’s intimidating to say the least. Beyond intimidating, it is full of questions. Yes. If you don’t feel like you can stay up there… I don’t know how Vince Friese does it, but if you don’t feel like you can get up or stay there then getting a start isn’t very attractive to you.

It’s a human thing. You are going to feel better if you finish sixth going up from twelfth, as opposed to going down from first.

Right, absolutely. In this game, in this day and age, that doesn’t play anymore because there’s so much talent. Going from a podium start to a low top-ten finish is no longer anything to hang your hat over. It’s so intense that I would have been okay with that the last four weeks. I would have been great with having good starts and ended up just somewhere in the top ten. That would have been fantastic.

The way I did it is good. I just need to minimize some mistakes in the race. If I wouldn’t have made some critical, almost crashes here and there… The track was brutal. I made some critical mistakes. Had I not done that, I think I could have been a top-five guy tonight. That’s a good feeling, because that’s far ahead of where we were seven days ago.