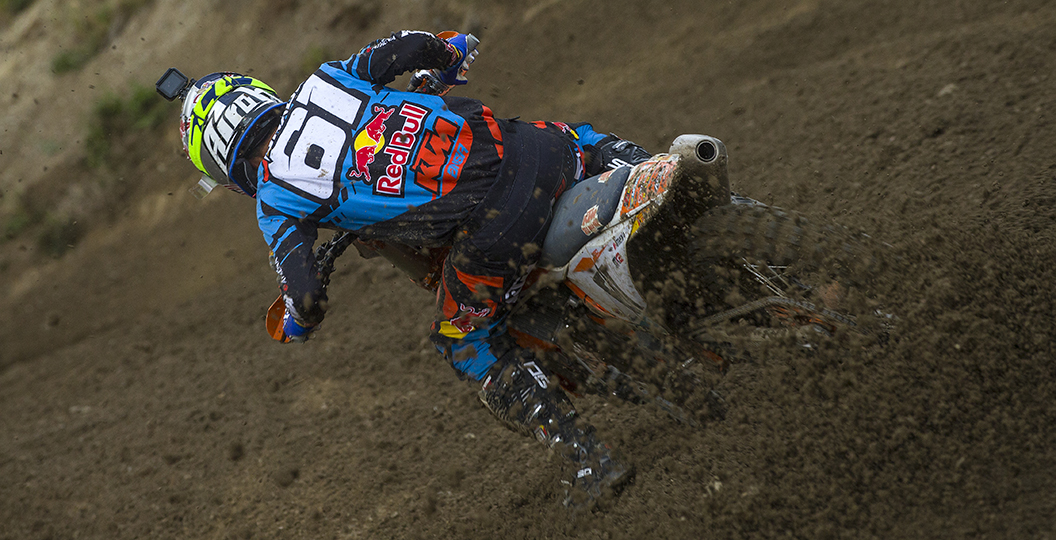 Jorge Prado has finished on the podium in twenty-four of the twenty-eight races this season and won nine of those. It is easy to see why Prado, who has won the last two rounds in succession, is currently leading the standings with six rounds to go. Everything has changed now that he has the red plate firmly in his grasp, plus an eleven-point advantage, but he is adamant that his mentality will not change.

MX Vice: I thought that was actually a really, really good weekend. It did not start off the best way, but in a championship performance you pulled through and got the job done.

Jorge Prado: Yeah! Yesterday I felt good with the bike. Just the qualifying race did not go perfect, as I had a lot of wheel spin on the gate. It was a terrible start and then difficult to pass on the first laps. I took it quite easy to not risk. Everybody was riding pretty aggressive, so I came up to tenth and that was okay. Here you can start good anywhere. I was happy with that. This morning I was feeling already good and in the first moto I got a holeshot, then Thomas [Covington] passed me. I made a small mistake down the hill and got a bit out of balance, so he got me on the inside.

After that I tried to pass him a couple of times. It was quite difficult. In one of the times that I was really close just before the pits, I got a small problem. One stone hit my goggles and the lens kind of popped out a little bit, which is normal. It was a really big stone. I got a bit out of focus. Covington passed me. I was trying to get it back, like the lens in the goggle. In every single jump I was kind of like with the hand trying. I put it back, and then I was back in let’s say fighting. I got back to Covington the last laps. It was really close. I tried to make passes but could not make it happen.

In the second moto I started first and made a really quick a big gap, which was really good. After that I felt a bit stiff in the shoulders, but still I was feeling strong. I was feeling fit. Covington was coming hard. But I knew I could stay there. It is a difficult track for passing, so I tried to make it a bit more difficult for him. I am happy with third and first for first overall.

Did you feel any reason to panic after yesterday obviously did not go to plan? Did you make any changes to the bike or anything, or did you just know that today would be a new day and in the right situation you could get the job done?

I was not stressed at all. I knew that I could ride like I did today, so I am not stressed. Just I came to the track this morning with same mentality as always, so it is good.

I know you expected this to be a really good track for Pauls [Jonass], because he has done well here in the past. For you to win and put quite a lot of points on him, I guess that is kind of amazing to you. Now you are going into tracks that you are good at, so confidence must be sky high?

Yeah. We could see yesterday that Pauls was running really fast. Today I could stay in front of him both motos. He made a small mistake I think in the second one, as quite some riders passed him. It is difficult to be always so consistent. I am doing pretty well at the moment. I am feeling really good and trying to not make many mistakes. Now I think six rounds left, something like that. So still long. Still many things can happen. I will try to stay focused. I think I can handle this. I will just do my best.

It really does seem like you can do no wrong at the moment. It is hard to even think of the last time you made a mistake or had a bad race. Do you feel like things are flowing?

Yeah, things are flowing because I try to make them flow. Everything is going well but after all there is a lot of hard work. We could see I could win this weekend but last week I was training hard and now this week again back to the programme. It does not come easy, but for sure you need to have a bit of luck too. Like yesterday I had a lot of wheel spin on the gate. It could have happened today, but we make progress, focus a bit more and we can make two good starts. We are having luck, let’s say. I hope it stays like this.

Finally, obviously you are trying to not think about a championship and the points and everything, but you have got the red plate now and for the first time. You must just feel like that is pretty cool. You can at least appreciate that this is quite a big moment in your career, right?

Yeah, this is the second time. The first time was in the EMX125, but it was a bit different… Just a bit. Once you are racing one class, it feels kind of the same. Just the colour of the plate is different, but I am coming to the races with the same mentality as always. That is the most important thing. Try to stay relaxed, do different things during the week and enjoying this really nice moment of leading the championship.