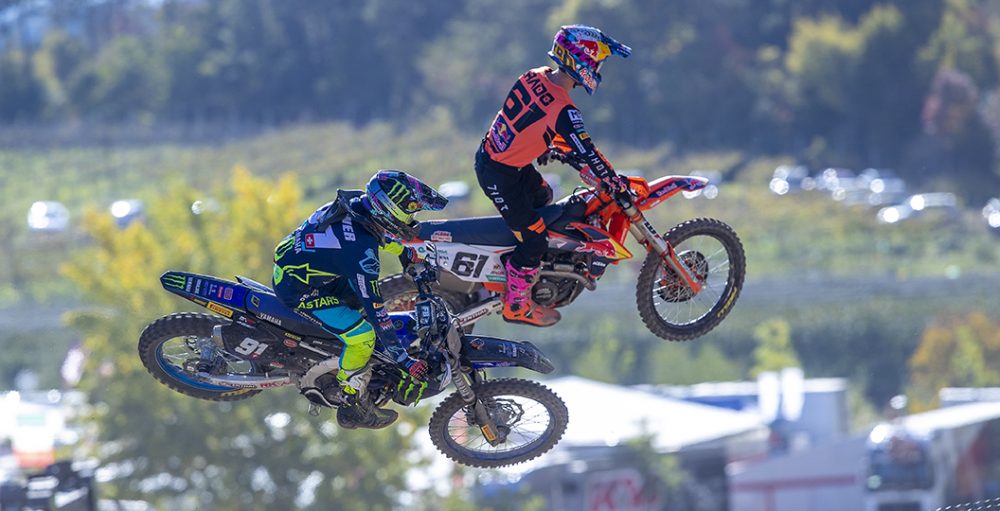 Jorge Prado has had a horrid month, as countless health issues have caused him to fall down in the order in the premier-class standings. Prado is now sat in fourth, 100 points behind the series leader, which would cause one to think that he was never really a factor in the title. How wrong that would be though. It was just a couple of weeks ago that he was nine measly points from the red plate and the man with all of the momentum. How quickly things can change.

Prado is now limping to the finish line, as another crash whilst training for the Grand Prix of Trentino left him with two broken vertebrae. It is astonishing that he is even riding, let alone the fact that he’s still competitive within the top five. Exact details of his injury were unclear before this exclusive MX Vice interview from round fifteen of the 2021 FIM Motocross World Championship, which answers many queries. This chat was first published as a post-race podcast on the MX Vice network.

MX Vice: First of all, what is going on with your back? I feel like you should not be racing, because your back sounds quite serious.

Jorge Prado: I have two broken vertebrae, the L2 and L3. It is serious, of course, and in the beginning they told me that it was just muscle pain in the lower back. I could not ride just before coming here to Arco, so I went straight into the race. It was so painful after practice that I said it was impossible. If it was a muscle issue, then you feel more relaxed and loose after a couple of days. I still had pain though. It looks like it did not get better, so I went to the medical and they took another scan. They could see the fracture. Yeah, the good thing is that it is not getting worse if I ride. If I crash on it then, of course, yes.

Yeah, it is not getting worse. I try to stay, ride and do my best even though it is very difficult. I cannot pull my leg up in the corners, you know? It is so painful in my back. When the bike gets sideways, then it is very difficult to hold. I am actually struggling quite a lot. I am not even 60%, you know? I am fighting a lot. This year I come out of one injury and feel a bit better again, then I get into another one. I mean, there is always a reason for everything. I think that this is just not my year. I am fighting through it. I cannot do anything, so I just give my 100% like always.

I am guessing that you do not care about finishing fourth or fifth in the championship. Have you thought about taking time off with your back? Why are you racing? This is a serious injury, so if you said that you were not racing then everyone would understand.

You are going to think about that now [laughs].

I mean, it is not getting worse. If I can do some top five finishes, at least, and stay in the top five in the championship then that is better than eighth. It is just for that. It is for that reason and I like this sport, so I want to ride my bike. I cannot crash, because that would make it worse. The crash from the first moto the other day was not good for that. I landed on my back there and today again. It looks like the luck is not on my side so much. In some ways, yes, because I could have made it worse in that crash. I actually did not hurt myself. There is a lot going on.

The crash that caused you to injure your back. Someone told me it was really bad, like a really big crash.

No. It was coming into a wall jump. They put some water on the ramp, so it was very slippery. I came in and lost the front. I actually jumped in slow motion without the bike. I landed flat on my back on the ground. The speed was not that high – it was just coming three and a half down on my back. That was actually it. I jumped without the bike and landed without my bike.

That sounds a lot like your crash on Sunday.

No, no. It was a different crash. I think that this one was bigger!

Did they actually get it on television? All I have seen is you landing.

Not the full crash, just like half. I hit it and kind of walked down… That is what I saw. It was a big hit. I lost the back and it pushed me into the other side, like sideways. I do not know how, but I got out of the bike. I just flew [laughs]!

There you go, that is some luck on your side. It is not all bad!

Yeah, maybe it could have been worse! I was lucky with that crash.

How are you feeling mentally? October has been an interesting month for you. A lot has happened and not much of it good, except for Spain. That was the bright point of October.

I mean, woah. It has been so difficult lately. I come out of one injury and feel good again, like my arm was a bit better just after Spain and then I crashed on the third lap of practice. Getting injured and fighting through the pain again, I am just tired about that. Mentally, I am just tired of fighting and not getting something back. I have been putting in so much work. I think that I was at my best, physically and mentally, there at Teutschenthal. I was not bad on points either. I was in the fight! I crashed and then all of these things.

I was so close, like second or third in the championship, so many times and so close to the red plate. There have been all of these setbacks that I have had to fight through. When I get on the bike, mentally I feel like winning. That is maybe how I am? A positive guy. I make a holeshot and do not care if my back is bad. I go for the win. If I can do it then good. If I can’t then I give my 100% like I did today. A tough year, I need to say.

We have got three rounds to go, so have you got any goals? I am guessing that it is not possible for you to win overalls with your current body, so are you shooting for the podium?

You know, maybe a podium is still possible? I do not think here at Arco. Maybe at Mantova, after one more week of rest. Hopefully a podium at Mantova to get out of this season with a good feeling in the body. Even though I know I am there, which is important. If I am not even riding at like 60% and I can do a top five then that means that my level is there. I just want to spray some champagne!