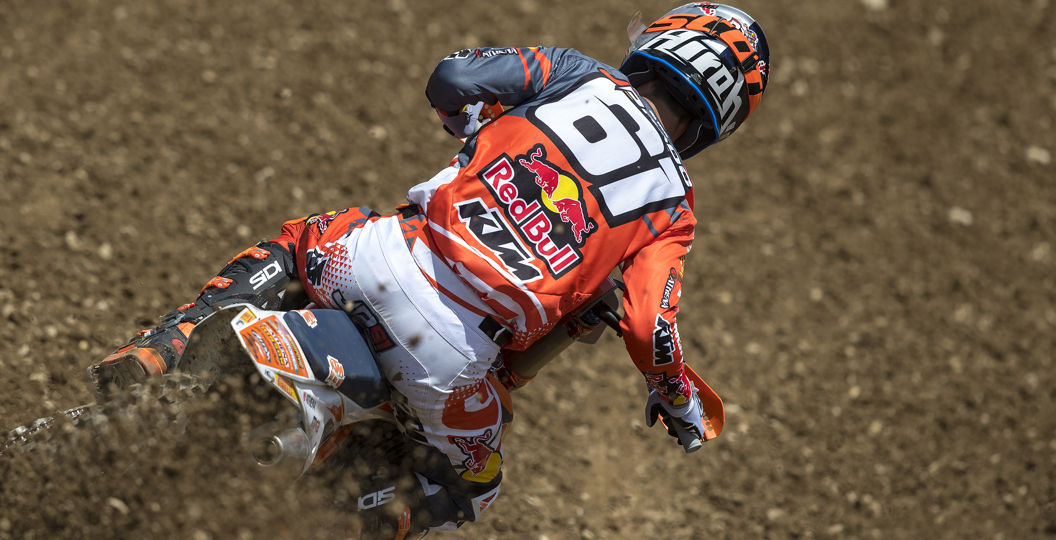 The fight for the MX2 title really tightened up at the Grand Prix of France, round ten of the FIM Motocross World Championship, because Jorge Prado pulled off a win and gained twelve points on Pauls Jonass. Prado discussed that progress in this exclusive interview, as well as some other topics.

MX Vice: Another win. Those are always nice, but this time you actually made up a lot of ground on Pauls Jonass as well. A perfect weekend, really.

Jorge Prado: Yeah, it was a perfect weekend. Like you said, getting really close to Pauls. It is still sixteen in points. Long season ahead. I felt really good this weekend.

In the first moto today you had a bit of a bad start and got to third quite quickly, then were the fastest guy on track. I know your team were telling you that you could win and that you had the speed to win, but did you believe that yourself? Obviously, [Thomas] Covington was quite far down the track. I do not know if you could see him and mark yourself.

I got a pretty bad start, let’s say. I got in one lap really quick to positions in front, then I had a small crash in the first lap. I had to come back again to the front, pass many riders and got to third. I did not even read the pit board in the first moto, because the lines were so deep on the straight. I did not have time to read the pit board. I was just pushing what I could and dealing a little bit with the energy, because through a crash and everything, you always use too much energy. It was a good moto. I am really happy about the riding the first moto. It was really good.

Did you give it your all towards the end because, even though maybe you did not know you had a shot at the win, you were still closing on [Thomas Kjer] Olsen quite quickly. Do you feel like maybe you even had more to give than that?

I was really close to Olsen in the last laps – that is for sure. One lapper got in-between and did not want to move quick, so that made Olsen go away a little bit. It was hard to come back to him. The last lap again I arrived pretty close to him, but not close enough to make the pass, but good first moto. Like I said, really happy with all the effort I put and basically it is the first time that I crash and come back so good.

The outside gate was a hot line for a lot of guys this weekend, but obviously we know you can holeshot from just about everywhere. In that second moto, you did not go all the way to the outside but you went around four gates in. What was the reason for not going all the way out there?

In the 450 class they did not close the first gates and with MX2, yes. If you want to go outside you had to choose the last one or just choose another gate. We decided to go there. It is hard. This start was really hard especially today, because they rip so deep and it was so muddy that you had to be also a little bit lucky. My starts were not the best. It was not the best starts, but I tried to fight to the first corner and that was the key.

The second moto you obviously led from start to finish pretty much. [Jago] Geerts was kind of keeping you honest, with a gap of around five to six seconds. The gap was not really going up or down. Did you know that he was that close? Did you have a spot on the track where you could mark him?

Yeah, for sure. Second moto he could push way more than I did. It was just controlling the race. I do not need to win by twenty-five seconds, just finish the race. The track was gnarly. It was easy to make mistakes. I tried to stay in that pace. It was easy for me. I could still be concentrated on what I was doing and I did not need to push the limits or whatever. I was just a good pace for riding.

I was enjoying it at the same time. I knew he was there. I was controlling. If he came a little bit closer in one point, then I tried to go a bit faster in one sector or whatever. I make again the gap I wanted to. That was enough for the win.

Today obviously was not a full mudder, but it was still quite sticky. A lot of deep ruts. Last year, mud races were not exactly great for you. The last round at Villars sous Ecot, for instance, was really hard. Is this kind of encouraging for you that on a track like today again you were good enough to win?

Yeah. We are still waiting for Ottobiano. It is a hot race and I think I am prepared for that. At least mentally I am prepared for that. I really want to show everyone what I can do when it is hot. So today, like you said, the track was rough. This morning was really muddy. The first moto it was still muddy in places. Coming into the moto I did not believe that I could ride like I did. You could see I improved a lot during the off-season. I am really happy with all the development we did.

No, it was just getting stronger. Last year I could ride with these conditions as well, but maybe for half a lap. Now I can do it for thirty-five minutes. That is something that makes a big difference in the GPs.

Going back over the last two rounds, Great Britain and Germany, in Britain you were the fastest rider on Saturday easily. Germany you were the fastest rider all weekend, but those two weeks you ended up losing points to Pauls. Do you look at those as missed opportunities? Maybe you could have put a bigger dent in the gap than what you have got now?

In Germany I did not win. I did not lose. Then in Matterley, first moto it was difficult to pass. First moto I had better speed than Pauls, but I did not find a way. I did not change the speed to a bit faster and make the pass. It was difficult for me to change the rhythm, because I got really comfortable in his rhythm and then it was kind of difficult. Second moto I got a holeshot. I thought I had it. I did not have it, but I thought it was possible to win if I kept pushing.

A couple of lines I was not really comfortable with. Pauls got close. Just the last few laps that I lose a bit the concentration and that gave Pauls the extra push to pass me and win the race. It was a weekend where I could definitely get some points. We came back here and I push harder in the week. I am still going for Ottobiano. I am really excited about this half season left.

Going into the second half, is there anything you want to fix or improve with the bike or your body? Anything that you are kind of looking to improve on?

Yeah, I want to even get stronger and faster. That is everything. Just improving little by little. For sure we will see the results.