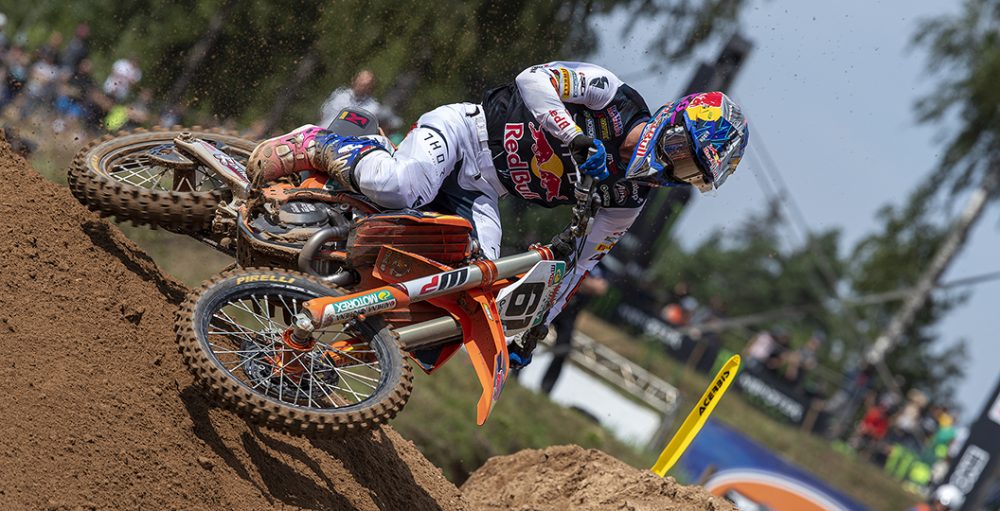 Jorge Prado has been lurking in the background through the first seven races of the 2021 FIM Motocross World Championship, despite winning a Grand Prix and two motos along the way. Prado is the only rider who has finished in the top eight in every single moto though! There is something to be said for that, especially seeing as he is dealing with the aftereffects of COVID-19.

Prado is clearly content with the way that his term has started, based on his comments in this exclusive MX Vice chat from the Grand Prix of Latvia, but is adamant that there is much more to come. The month-long break may aid Prado more than anyone else; his progress in the last four weeks has been significant. Imagine what the next four weeks, with no travelling or races, could do for him!

MX Vice: A moto win today, and you got on the podium too. Another positive day. This little four-week run has been good for you, as you have gotten back to where you belong and should be. I guess you are happy.

Jorge Prado: Yeah, I am quite happy. It was a very good day. I really struggled in the first moto. I did not have good lines; I could not keep up with the rhythm. I was pushing – the guys were just fast. I went back to fourth, which was okay. [Romain] Febvre was pushing in the last few laps, and I managed to stay in fourth. I just gave it my everything. It started raining quite hard in the second moto. I knew that the start was important and that the goggles would be very, very important.

I managed both things very well. I took a good start and attacked Febvre on the first lap. I almost made a pass, but I made this mistake. He was just riding in front before he made another mistake and crashed. I was free to go. I was back in first and felt good. When I saw that I was riding in first position, it felt even better than before. I had better lines in the second moto and my rhythm was just perfect. I was not pushing super hard – I was just riding.

That made it good, because I knew that Jeffrey would attack at the end of the moto, and he did with three laps to go. I could step it up a little bit. He tipped over on the last lap. These things can happen when you push, so I managed to win the second race. That was very good for me, also mentally. The second motos are always quite rough and you are coming from a hard first moto. I am feeling better and better every weekend, like stronger. I am happy about today.

You obviously won the second moto, which was great, but you were setting some of your fastest times towards the end as well. I was watching that and thinking the same thing – it was a big step forward for you.

Pushing in the second moto is not always easy. I was struggling until Loket and not feeling fresh. I am starting to feel a lot better now and I am starting to show that on track. Once they attack me or pass me, I can react directly. This is what I like. It is my way of riding! Everything went right in the second moto. I was choosing every single line, and everything was just working. I am happy with that – it was a good one.

I feel like you were expecting a lot from yourself today. You were going for it from the first lap of each moto, with aggressive moves, and making things happen quite quickly. Did you feel confident right from the start of the day?

Yeah. I was coming here with the mentality of ‘all in’ today.

Yeah! You know, I just did not have the pace in the first moto. I was just fighting. Everything went well in the second moto; I could do everything. Everything was working. That felt great. I know that I am more prepared than in the beginning of the season. I am even more prepared than I was for Lommel or for Loket. I was feeling better in training last week, so I said that this would be the weekend to gain some points and try to get that win. We came up a little bit short, but it was good.

What did you do between motos then? What led to the turnaround? Did you meditate or do something super special?

There are going to be MXoN announcements in this month off, but how do you feel about it? It does not sound like it is going to count for points, but it will be in the middle of the season. Spain could have a decent team; Ruben [Fernandez] is doing well in MX2 and then you would have to find a third guy. Would you be motivated to go?

We will see. I have not decided yet. We have four weeks now to work on everything; the bike and myself. I will relax a little bit but keep on training. We will come back stronger for Turkey. Our main goal is the world championship. We will decide if it is a good decision to race the ‘Nations or not later.

What are you going to do in this month? Rest? I guess you need to do that, to allow your body to heal from the long COVID. You must need to train hard as well though to build yourself back up?

Yeah, we will keep training. I need a bit more training and the right training. We will focus on that and step it up for the next races.