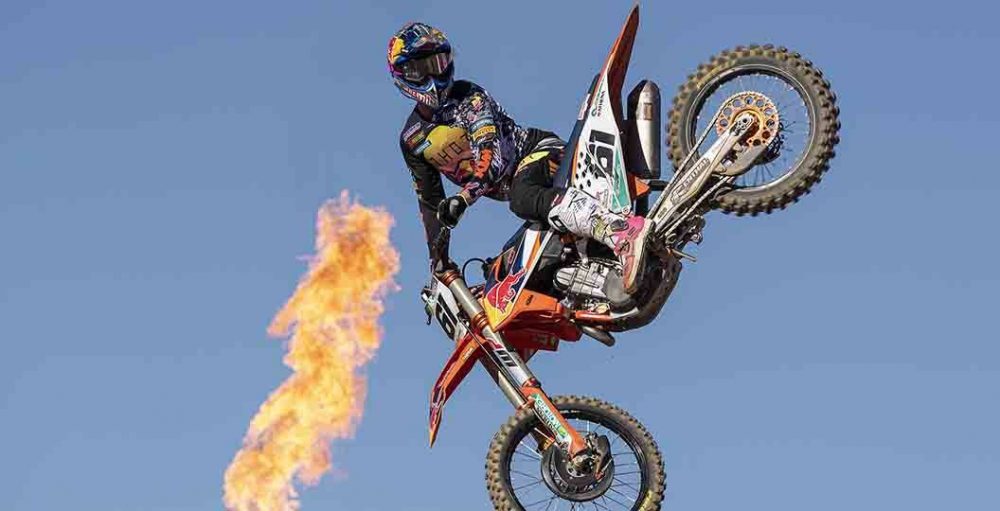 Jorge Prado had a very disappointing outing in Italy a week ago, but rebounded in the best way possible with a clean sweep of both motos at the Grand Prix of Spain. There were no fans at intu Xanadu, of course, but there was still a significant amount of buzz around the Red Bull KTM Factory Racing star. Prado talked about his home Grand Prix success in this exclusive MX Vice interview, as well as the fact that he is not taking his eyes off of the grand prize.

MX Vice: Your first home Grand Prix on a 450F and actually only second ever, but your first 1-1 on the big bike! About as dominant as you can get. Two holeshots and controlled the races throughout with no real trouble. A perfect day. You must be stoked!

Jorge Prado: Yeah. I’m very happy about the race. It was just a perfect day. I felt good in practice and knew the start was very important here. The track was very tricky, with a lot of ruts and some big jumps. Two good starts. Felt good. It was perfect.

Was one moto better than the other for you? Did you feel better in one or the other?

In the first moto I had a little gap already, since the beginning pretty much, and then in the second moto [Tim] Gajser was pushing me a lot in the first laps until I made that gap. He made a mistake or something, then after that it was more comfortable. Anyway, we still were pushing. Totally different two motos, but both wins.

One thing that was the same in both motos was that in sector one – from the finish line until the end of the waves – you were destroying everyone. You were so much faster. I kept watching you to see what you were doing differently and there was nothing. You were just faster. Did you know that was where you were at your strongest?

Honestly, no [laughs]. I knew where Gajser made a pass in the second moto, on the second lap, and knew I was losing there, because just when we got out of the gate on the first lap, I heard his bike very close to me on that part. I knew he was going to make the pass there, but I also knew what I could do to pass him back. I changed the line, and then I could keep that line through all of the moto. I changed a couple of lines mid-moto in the first moto also, which helped me a lot physically and also lap time-wise. It was faster.

Speaking of your physical state, I did not speak to you at all in Mantova. You had that crash at Mantova 3 and banged up your hip, didn’t you? Are you okay now? Is that still a bit painful?

Yeah. It’s still a little bit painful in some movements, but it’s nothing that will make me go slower on the bike. For sure when I do some cycling it’s still there. You feel the pain. When I touch it, I feel that there was a hit. In the week I’ve been training on the bike, which helped me to come here mentally and know what to expect with the hip. It was a hard crash at Mantova, hitting my head and my face. In the head I also got a bit of damage, let’s say, on the front part close to the eye. I’m fine. Lucky to walk away from that crash quite safe.

That was obviously a bummer, because you hurt yourself and gave up a lot of points. This was a perfect way to rebound, huh? 1-1 and back on top.

Yeah. We are getting closer right now, with the points difference between myself and the guys in front. We are getting closer. Going 1-1 is the best I can do and hopefully we can keep this going into Lommel and do the same. I’m very happy, especially here on my home soil. It’s a totally different feeling.

This is your home Grand Prix, but with no fans. Has this felt like a home race? There has been a lot of attention on you. Like we were saying before, I think I’m the fiftieth person to interview you today. Does it still feel special and like your home Grand Prix?

Yeah. There were a lot of things to do during the whole week, and especially the last two days before the race. It was quite tough with a lot of interviews, going up and down. It was quite hard physically and mentally before the race, from doing so much stuff. I could concentrate myself good and put maximum effort into both motos. Now I get a week to rest and get the feeling back with the sand. Of course, racing at home is great.

Organisation here could be probably the best Grand Prix. Track-wise it was very good too. It was tricky because of all the ruts. They ripped it good. Different choices. Big jumps, but not that many. It’s good. This is more like motocross, with different things. The layout is totally different than all the tracks that go up and down, up and down, up and down. This goes a little bit with elevation, like you said. It makes it a totally different feeling, also riding-wise. It was strange. It was nice to have a track like this, because normally they just destroy it making jumps or stupid things. Here they did a great job.

Going into Lommel, you have got an incredible record there over the years. The first time on a 450F, but there is no reason why you cannot have more sweeps. You are definitely in a good place at the moment.

Well, we will see. Lommel will be a tough one. I need to get there with my feet on the ground. It’s another race weekend. I won today, but next weekend is something different. We will try to do our best and hopefully get some good points to regroup in the championship.