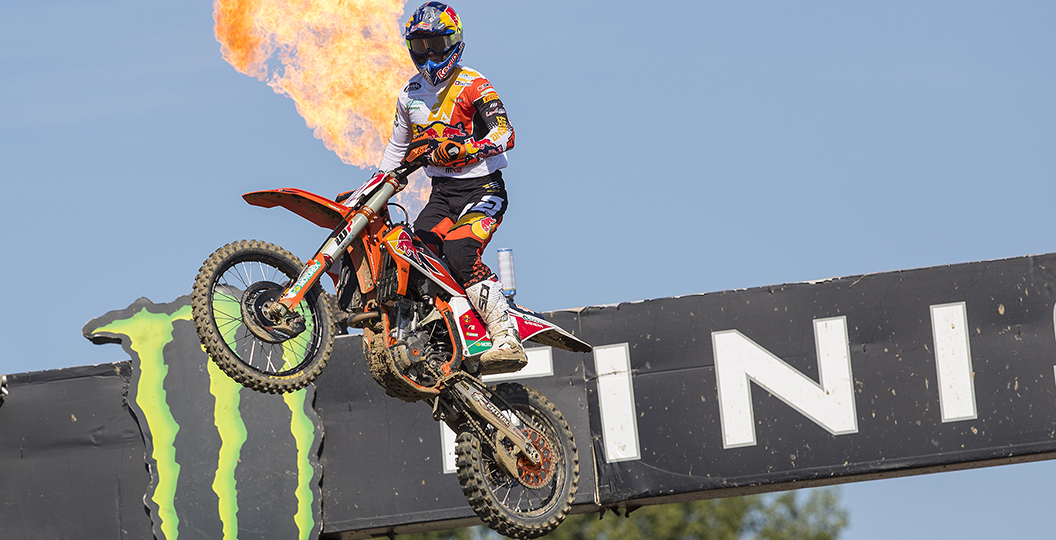 The Grand Prix of Italy was another special weekend for Jorge Prado. The Spanish sensation swept both motos at the fifteenth round, which boosted his advantage in the championship standings to one hundred and thirty points. It’s now almost inevitable that he will claim his second world title in as many years at the upcoming Grand Prix of Sweden. Prado discussed all of that in this exclusive MX Vice interview from the historic road-race facility of Imola.

MX Vice: 1-1 again. Nothing changed. Nothing new. Your usual feeling. It was a pretty perfect weekend aside from one sketchy moment in the second race, I think.

Jorge Prado: Yeah. It was a very good weekend. Yesterday I felt very good. After the race yesterday I felt that the track was a bit sketchy, but today it was even more [sketchy]. If you compare today with yesterday, then yesterday was way better. Today the track was quite bumpy and didn’t really have a flow. Last moto I kind of found some good flow in the last laps, but it was quite a strange track to ride. I had fun at times but today was definitely tough. It was a hard weekend. Yesterday felt good and today I had good starts, so I could make it happen.

Instead of just getting in your flow like you would at, say, Lommel and just focus on riding, were you focused on not crashing out there? Like you said, the track was sketchy. Was that always in your mind? Like, “Don’t crash, be safe and don’t get too close to the concrete.”

In the sand it’s difficult. With the sand you can play a little bit. It’s more difficult to get a part of the track where you feel that it’s dangerous, because it’s pretty much all the same and pretty bumpy everywhere. Today the track… The ramps were very hard.

You get out of the rut and then you have these hard, slick faces and you need to be careful with the throttle position. You can slide off and crash on the jump, so today was definitely one of these days that you really need to look for good lines and, like you said, ride with the head and try to not crash.

Aside from the sketchy moment in the second race, did you have anything else through the weekend where you thought you were going to kill yourself or do anything stupid?

Do you mean the one where I got very close in the waves, to the outside? I was hoping to go in a different line, but I found myself going there. Also because I had a lapper in front and I hate to get stones on me, so I went too much to the outside and on the edge of the waves. I didn’t feel that it was very sketchy on the bike, because I felt like the front wheel was on the good part and just the back was sliding. It was nothing too crazy, but for sure it would be better to go both wheels more in the middle of the track [laughs].

Did you have a sketchy moment with a backmarker in the first race as well? In the berm after pit lane? Everyone screamed, so I don’t know what happened.

Yeah. I was going inside every single lap and then he was in the middle. After the bump, he came to the inside and then there… I wouldn’t say it was totally his mistake. I pulled the clutch and the gas to scare him, but he was pretty much already in the rut. I changed the rut and he changed with me. He almost hit my front wheel. I was like, “No!” With the lappers it’s always crazy. The last lappers, they maybe don’t know that you are coming or even see the blue flags. I don’t know. Not even those. More in front when you get closer to the middle of the pack, it’s not always so easy with the lappers.

They changed the track compared to last year. Did you think it was better than before? I feel like they probably tried to slow it down, but it didn’t really work that way. You guys were just basically riding as fast as you possibly could around there.

I cannot remember the lap times from last year…

I think it was longer. I ca’t imagine it would have been shorter than this.

I don’t know if I like it more. Maybe last year, because the jumps were a bit bigger and were jumps that you could actually land perfect. This year the finish line in that second moto… I think I made it perfect on four or five laps. The rest I always came a little bit short, because it’s so hard on the ramp that we need to be so careful with the throttle. Once we jump, we don’t have that speed. I don’t really know if I liked it more this year. This year was tougher than last year. Last year was flatter.

It was obviously another good weekend for the points. Getting closer to the second title… That is going to happen in Sweden. We know it’s happening. You are not going to do anything different this week, are you? You know how to go through the whole title thing. Just stick to the programme, then it will probably lead to another 1-1 and you will get a gold plate out of it.

We’ll see what I do this week. We ride a lot. Hopefully we can do a good training. Also looking forward for the ‘Nations. Next weekend will be a good week, hopefully. Hopefully we also get 1-1 and keep the wins going. Very excited. We are doing a very, very good season. Didn’t even expect that I could win every single round I raced. If you look back, I’m winning every single race in the MX2 category since last year at Assen.

It’s quite cool to win. Today I came out of the second moto. I was staying in the shower and I was thinking, “We are in a dream. Who could expect or who could live what I’m living now?” That is winning every single weekend. I can’t describe this feeling, but it’s incredible. It’s happening. It’s crazy.

You mentioned the ‘Nations. What are we doing with Spain? Have you heard anything? I feel like you are probably going to be on the team. I think they might want you there.

Yeah, hopefully they get me in the team. We’ll see. We’ll see when they will mention the riders. I still don’t know. I think we can have some decent riders. We have a few riders injured. Hopefully we can do the best to qualify for Sunday. Once on Sunday we will see how it goes. The starts will be very important and just try to have fun, because it’s a very good weekend. It’s a nice weekend… A different weekend.

Last year I had all the fun, because it’s a weekend that you stay more with the Spanish team than really with the KTM Factory Racing team. You live a little bit different. You are more like a country, with a team feeling. It’s cool. It’s a very cool event.

You’ll be in MX2 though, won’t you? Is there talk of you going up to the bigger bike for the race so that [Iker] Larranaga can stay in MX2?

We need to decide, because I still didn’t ride a 450. Going now 450 will be quite tough. I still need to test. I never rode a 450. First I need to get this title done, then I am looking forward for the next chapter. [Ed Note: The Spanish Motocross of Nations team was announced this morning and Jorge will race a 450].