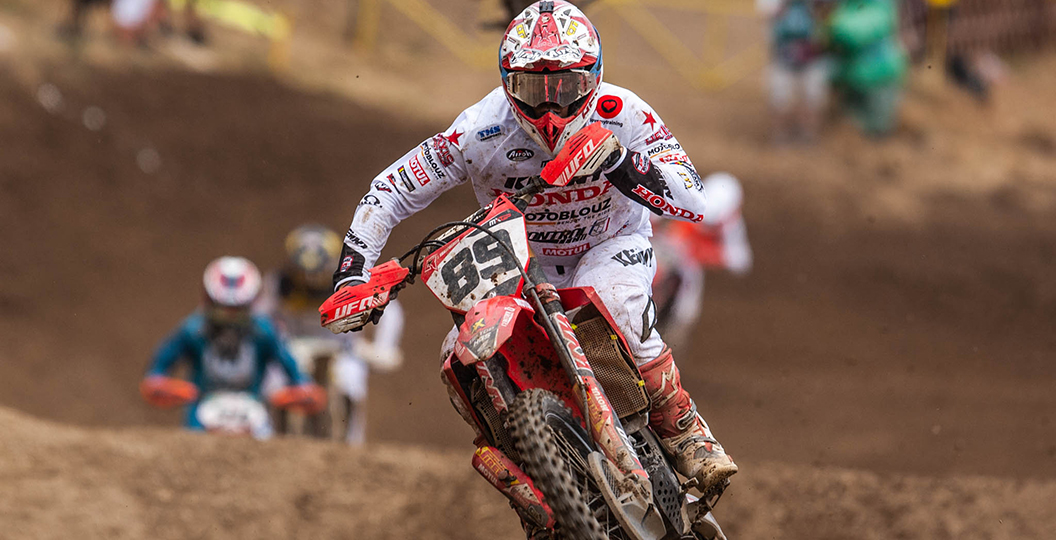 Jeremy Van Horebeek made a step up at the Grand Prix of Czechia over the weekend, as he returned to the top five and showed flashes of potential again. The help that he has recently received from Honda obviously contributed to that. What was that exactly? Van Horebeek explained the upgrade to his machine in this exclusive MX Vice interview, as well as what makes him happy and would keep him around in years to come.

MX Vice: This is obviously a good place for you. You have got great memories here. It seems like you kind of used that to turn the last couple of weeks around a little bit, because you stepped it up again and showed the speed to run near podium positions or in the top five. All around I think it was a positive weekend.

Jeremy Van Horebeek: Actually, the track changed a lot from 2014 to now. The dirt is not so hard anymore. I think it is easier than in the past, but the last weeks I have been really good. I got some top five [finishes] and some good riding. Top five this weekend, good. I am happy with that. Only the starts. The starts are difficult, because we are on a stock engine with the pipe and the piston. It is perfect for riding, but for the start it is not so easy. Luckily, I have some help from Honda now.

Yeah. We have the standard ECU and they modified it a bit, because they can go deeper into it. That is something positive. It would be nice if we had some more help. It would be even better. I am thankful for that already, for what they are doing. Top five is good. I hope we can keep building on this for the last five. Top six in the championship is still possible, so we will see.

Did you ask Honda for that help or did they kind of just come to you and be like, “Hey, we figured this out and think this is going to help?”

We asked a little bit with Honda Europe but, in the beginning, it was kind of tough. Then in the end they really liked the way we are working with our team, especially because we run almost stock. In Japan, they really appreciate that. It seems like they want to build something around that. I hope soon we have some news from Honda Europe and maybe we will be a bigger team. We don’t know. It all depends on them. If we have more support, then we will be even better.

You are definitely showing good things for Honda though. I feel like people maybe don’t realise that you are riding a bike that any person anywhere in the world could get. You are proving that a guy who rides on the weekend’s bike is good enough to run top five in MXGP. That is crazy.

Yeah, really. I swear on my life. We have a piston and a pipe, and both you can buy. I have the semi-factory suspension, okay, but you can also buy it. It is expensive, but you can buy it. Everything that is on my bike you can buy. The only thing is that Honda went deeper into my ECU. Even our team or normal people cannot do that, so that is the only thing you cannot [get]. It’s good. I think some people realise it and some people don’t.

I feel that I have some decent speed and, as long as I have that, I will be here. I enjoy it. It’s my life. From the day that I struggle… It is not personal but with [Kevin] Strijbos and [Evgeny] Bobryshev, if I have to struggle like that then I’m done. I’m out of here. That’s my thing and as long as I am doing the things that I’m doing now, I am fine and I enjoy it.

I am almost there. Today I was pretty fit, because first moto I came from the back also and in the second moto I still had some energy. I think I’m almost at that level, but the thing is those teams work every week. They change every week and we cannot do that. We don’t have the budget for that. I think for myself, on my level, maybe a few percent, but just some details. We’re limited on the bike.

I feel like you are definitely a lot happier and more relaxed than you were at this time last year. I think that is clear.

Yeah, because I think last year the people don’t realise how difficult it is. Once they are in the same situation, they will realise. I think many guys will have some headaches the next few weeks.

What would make you happy through the last five rounds now? Top six in the championship? I’m guessing that is the one you are looking for?

Yeah, it will be fine. I know it is a pretty big gap, but there are still a lot of points [up for grabs]. I don’t know. It is maybe about fifty points or something [Ed. Note: It is twenty-seven]. I don’t know exactly. Top six would be awesome to finish the season, but to spend every weekend in the top five… Even if it’s in motos or overalls, that would be awesome.