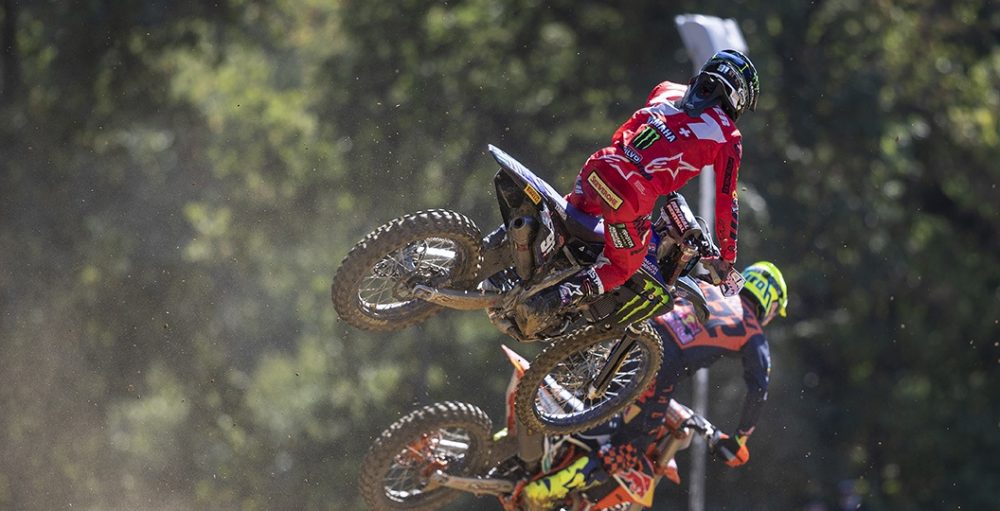 Jeremy Seewer is undoubtedly the man of the moment in the 2020 FIM Motocross World Championship, despite having not won a race yet this term. Seewer is going from strength to strength with the Monster Energy Yamaha Factory MXGP outfit and is so close to a maiden Grand Prix victory. What will it take to get there? What stopped him from pulling the pin on Sunday? All of that is covered, as well as much more, in this exclusive interview from Italy.

MX Vice: Another amazing day. Your speed from Latvia clearly was not a fluke, but the win was so close. Are we frustrated or are we disappointed? It’s one or the other, so which one?

Jeremy Seewer: Both, a bit. Again. That’s the third time I came that close to a moto win. Two times out of the three times it was about the GP win, like in Latvia. This time I #84 riding in front of me the whole moto, like basically the GP win. I didn’t think about this from the beginning but I knew I just had to beat him. I tried my best. I followed him. I felt faster in some spots, but he had a bit advantage in others. I tried to adapt and catch up there again. I was hoping that with Jorge [Prado] he would lose a bit more time, but he was suddenly through.

Luckily I went quickly as well to keep following him, but it just was not enough. He didn’t do any kind of mistakes, not once. He lost the feet once actually after a waved yellow, where I tried to get him. It was at the waved yellow where Arnaud [Tonus] crashed and too dangerous to pass. I thought that was my moment to surprise him. I tried, but I pushed a bit too hard and made a mistake. Ten metres after he made a mistake at the same time. That was a big chance gone. What can I say? I’m happy to have one of my best performances in MXGP in one way and I’m still, like you said, disappointed and frustrated to not win again, but that’s racing.

Like you said, in the second moto I felt like all the time Jorge was leading it was fine. If Jeffrey got him though, then you were screwed. You either had to get Jeffrey before he got Jorge or follow him straight through, like you did. That was basically the whole race.

Exactly. First I hoped Jorge would hold him up the way that I could take advantage of it. This didn’t really happen, but I luckily could get through quick. It was also Jorge. He kept the pace well for many, many laps and then all of a sudden in one lap he just lost it. We saw it coming. He was two seconds slower and we kept pushing the pace. That was the key, to keep following Jeffrey. I managed this, but it still wasn’t enough.

I was even frustrated for you. Watching both motos it was like, “Okay, you are clearly fast enough to win and staying with Jeffrey isn’t a problem at all.” Even if you stayed with him I was just like, “I don’t know where the hell he’s going to pass him.” I felt like you either needed help with a mistake or from a lapper screwing him up, because I don’t know where you can pass out there straight up.

Exactly. I could pass Tony [Cairoli]. I got him straight away. I was fourth at the start. Got Tony corner three or something just by pushing. Bam, caught him. I got Romain [Febvre]. I got many guys today, but Jeffrey knows where to push. He has good lines. He’s not a 90-time Grand Prix winner for nothing. He was riding good. Like I said, he did one mistake and it wasn’t enough for me to get him. That’s basically the point.

Credit where it’s due. Everyone is going to talk about your second moto. I bet every person you have spoken to today has talked about moto two. Maybe moto one was better, because you came from a ways back to fight for the win. People are going to overlook that. You went through fast guys and caught the faster guys. I think that was even the better ride.

Honestly, yes. I was around tenth or twelfth position after the start in the first moto. I thought, “I’m screwed.” Straight away I found the flow and I passed many. I just struggled with Clement [Desalle] a bit. It’s good to race him, but it’s always tough to get him. He’s smart, as well.

In Latvia I spoke to Jeffrey about this. He said that Clement and you are the hardest people to get around. You are moaning about Clement, but Jeffrey puts you in that same category [laughs]!

This, I’m happy to hear. I think that Clement doesn’t do it dangerous on purpose, but he shows you that he is the boss. He wants to make you feel like, “I’m the king. You don’t pass me.” This is the hard thing about Clement. Jeffrey, when he tries to pass me, I’m just defensive. I would never do something really stupid. I don’t show him that I’m the king and you will go off the track. I just try to battle him. I’m happy to hear that he mentioned this in the interview. I lost a bit of time on Clement, actually, but once I got him I could catch the leading group. I got a little bit lucky with the mistake of Jorge on the last lap. I got Tony really nice. I set this pass up on the hill. I cut him off and it was a super nice pass. I think the first moto was harder to achieve finishing second than the second moto.

Obviously we are back here on Wednesday. Same track and everything. A unique situation where you line up knowing you have got it all with you, what you need to win. Does that make you more relaxed? Are you sat on the line going, “Okay, even if I start tenth I’ll be in this.” Are you more stressed, because you know the opportunity in front of you?

Honestly that’s what I try not to do, be more stressed. Coming into this race you don’t know really where you are at, because it’s been a while since we raced hard-pack. Since Matterley basically! Now you are not expecting to win straight away, because first you need to see how it goes. Now I know I can win. You could put more pressure on yourself – now you want to go to Wednesday and say, “I’m going to beat everybody.”

I’m going to stay relaxed. I’m going to just focus on my job and focus on doing well, because I know the guys who struggled today have time to change. They have time to set up their bike a bit different and work on some things. They will catch up a bit, which is just normal. The guys like there already, it’s harder to improve a bit more even. It’s going to be a new race, starting from zero with a new time practice. Track can be slightly different too, so it depends on the weather. I’m trying not to put too much pressure on now.

One more thing, actually, because you are a smart guy to ask this to. When we switched to the one-day thing every rider told me the Saturday is more tiring than anyone would think. That’s actually the tiring day. Since we started racing again, MXGP has been amazing. Everyone’s been close. It’s been incredible. Do you think that more guys are able to run your speed, Jeffrey’s speed and Tim’s speed as they are coming in fresh? There is no Saturday and no qualifying race. They can come into the first event of the triple header, lay it all on the line, ride a wide bike, give it their all, get tired and who cares. It’s Wednesday and next Sunday when you guys shine, because you can actually do this consistently.

That’s exactly the point, because on a full GP weekend Saturday is tiring. It starts Friday, Saturday… Your body, the energy goes out. Even though it’s just a quali race, you have still got to focus. It is tiring. That’s for sure one of the reasons the races are just that cool to watch, because we push for 35 minutes. We have the energy to push for the full 35 minutes. We did similar last year but just the pace, I think everybody can agree is a bit higher. That’s for sure because of the one-day schedule.

The other thing, I don’t know why we are now on the same pace as Tim and Jeffrey. It can be the same reason, but it can also have to do with living in a strange time with corona… I think the human body is affected by this kind of thing. Training schedules are different. Preparations are different. People are lonelier, let’s say. The social life is a bit gone. Maybe all these reasons together make us more even. I don’t know. It’s just hard to answer, but for sure it has to do with something.