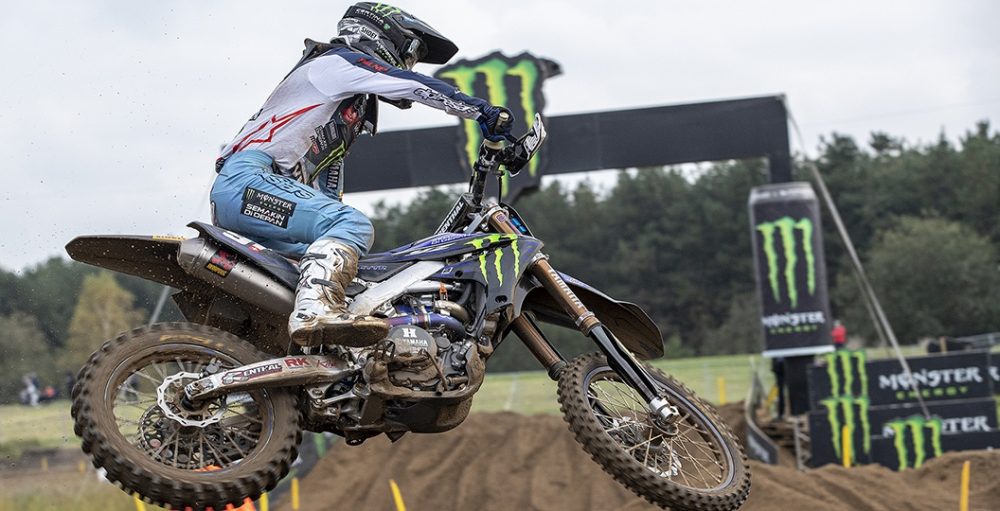 Fifth overall at the Monster Energy MXGP of Flanders may not seem a superb result for Jeremy Seewer, but he worked extremely hard to grab that result. Seewer had a freak issue, made multiple mistakes and still charged through the field better than most. The eventful day is recapped in this exclusive MX Vice interview from Lommel. Seewer is now tied for third in the premier-class series standings, fifty-nine points behind the current leader. Five rounds remain.

MX Vice: Eventful day… Maybe you had a more eventful day than anyone else. The first moto was just carnage. You ate a lot of roost, but came through really well. I don’t think anyone will really notice that. You rebounded strong with the second moto, which was a little easier with a better start and everything Wrap it up for us.

Jeremy Seewer: Yeah! First of all I have to say the track is really, really tricky at the moment with all the wetness inside. It makes the front wheel so tricky to handle. To lose the front here is just so easy. Overall, I had a good feeling with my bike. In the first moto I didn’t have the jump at all for some reason… You know how brutal it is at the start nowadays. The first corner is quite tricky and riders crashed in front of me. I hit Calvin [Vlaanderen], so I am sorry for that. I couldn’t avoid him. I had another small tip-over trying to pass already and was last. I started to put in some decent laps though. I did not hurry at all, because we have six motos here.

I ended up being fifth, which was super good coming from really far back. I had another small crash, which cost me around five or six seconds. Nothing too bad at Lommel. I think this happened to everybody today or to a lot of people at least. I was going for fifth again, which would have been a decent result, but then I had a technical problem. My start button would not unlock. I just hit the double after the waves and landed in a soft spot. It just went in and wouldn’t go out. I stopped on the track, kicked it and that did not work. I thought I may have to make it to the pit lane, but luckily after two more corners it went out. I lost another twenty seconds or something. It was a frustrating eighth place with a lot of speed, actually.

I had to make up for that in the second moto and I did. I started third and followed them all the way. They just had a really quick first lap. I was like, “If they go this pace then I won’t follow them.” I caught up after one lap and we stayed together until Tim [Gajser] just pulled away a bit and Jorge [Prado] made a mistake. I went to the inside and had a small moment to rethink the situation, so I expected him to know I was there. He made a big mistake, so I expected him to go to the outside. I was inside of him! You know, the inside guy normally wins. He just tried to cut back anyway, and that’s where our lines crossed.

That’s how we made contact and he crashed. That’s racing. After that, I was a solid second. I had good laps, but then I just made a small mistake with two or three laps to go. Nothing huge, but I just hit a small kicker. Nothing I would crash off of, but on the landing I just hit like a hard rut. It’s so hard underneath, because of the water, and so packed. This made me crash like a goon. It was not a small crash, but also not a big one. It was frustrating to lose those two points. Still, happy and we have two more races to go.

Speaking of weird crashes, you have just reminded me of something I wanted to ask. You crashed in qualifying. After the long sweeper there is that big roller. I did not see you crash, but I just saw your bike like halfway up it. What the hell happened there?

I think Prado did the same. That’s the place I crashed the second moto again, but both of those crashes were not bad. It just looks liked a shitty position. There we jump from the inside jump quite close to the wall and then we scrub, but we jump in two ruts that are really packed and hard. If you land let’s say like this much more inside or outside, you would always lose your front or be a bit off balance. That is exactly what happened this morning. My front just got turned in when I landed and the bike stopped. I just went off the bike. I did not hit the ground hard at all, just the bike was laying like really shitty.

It took you a long time to get on it this morning.

Yeah, because the handlebars were downwards on the f**king steepest hill on the track [laughs]. It was not easy.

Coming through the pack in the first moto, how easy was it compared to normally making passes here? A lot of guys today seemed to take longer to get around riders they would normally fly past here. It just seemed like it was a little tougher than normal.

Yes, it was, because the sand is so heavy and you get roosted a lot. Also me, in the beginning I stayed behind guys like [Jordi] Tixier for some laps. Tixier is a good rider, but if you are faster you pass him quite quick. Today it was not easy to pass. Somehow, anyway, I just focused on myself. I rode and I passed. I watched the pit board to check stuff and I saw P7. That went quick, because many guys had mistakes. Tony [Cairoli] crashed. This guy did this. It felt like a big struggle to pass for Lommel and at the end of the moto I was still surprised I was there.

Like you said, we have got four more motos here. How are you feeling going into it? I’m guessing you are feeling pretty good now? You had a few crashes today, but ready for Wednesday?

No. I’m happy we have some recovery, even though I feel pretty well. It is going to be four tough motos. The weather can change. We are in Belgium and can have some rain. We will see about this. Some crashes today, but many people had mistakes. It was not only me. It’s just really tricky out there. I’ll try to avoid this and if I do that I can be fighting for podiums, which is really good for me at Lommel.

I guess they are going to make big changes here or at least bigger than we saw at Faenza and Mantova. If there is one thing that you’d like to see changed on the track from today, what would it be?

Sector two, because I sucked there all day.

Just run a bulldozer straight there then [laughs].

Yes [laughs]. Don’t change the waves. I was super fast there.

Yeah, they are gnarly. That’s where I made all my time today and I cannot even explain it.

Yeah. I was super. I have the shortest legs, but I was the fastest on the waves for some reason. The track is not bad. It’s just brutal, because the sand is so wet and hard underneath. Any changes that they are going to make, Lommel will turn out similar.