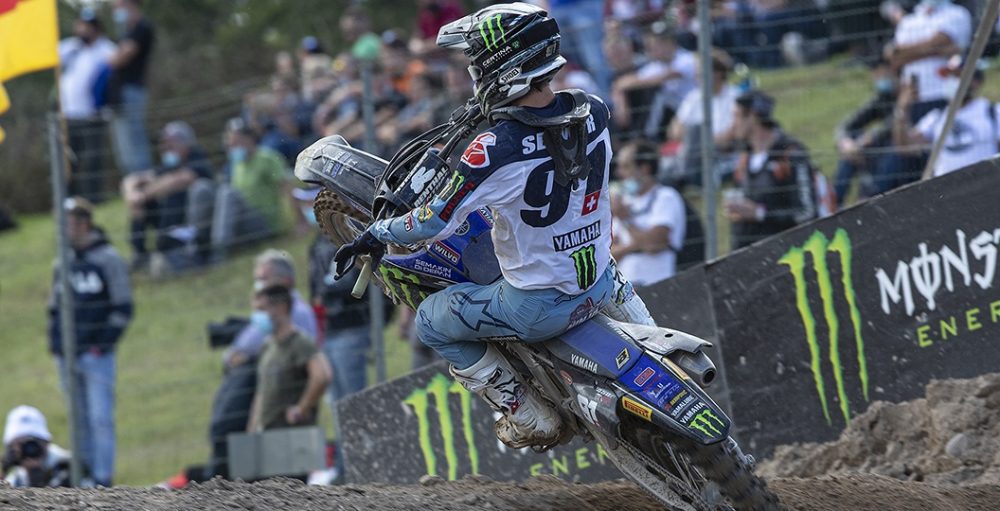 Jeremy Seewer had a mediocre day, by his high standards, at the Grand Prix of Europe, but still put solid points on the board. Seewer discusses his day in this exclusive MX Vice interview, as well as his plan to avoid learning about the championship standings. Seewer is now third in the championship standings and 30 points behind the current series leader – that is exactly the position that he was in entering the Mantova triple header.

MX Vice: A consistent day. Different as well – the second moto was stronger than the first. The second moto  was quite frustrating, I imagine, because you had the speed of Tony [Cairoli] and Tim [Gajser], but just could not get around Romain [Febvre] until the last lap. Story of the week, because you could not get [Jorge] Prado on Wednesday or whatever. Just this place: Tough to pass.

Jeremy Seewer: Yeah. Today the track was flatter. That’s the first thing to say, because they flattened it after all the rain and stuff. They kept it bumpy from the EMX at the previous races, but it was faster. Checking out the lap times it’s been one or two seconds faster on average all day. A bit different and even harder to pass. The speed’s higher. Honestly, I was not feeling the best today. I struggled in the morning. In the first moto I struggled a bit. Just being a bit off mentally. I don’t know. My body felt fine, just a bit empty.

I’m really, really happy to bounce back in the second moto. All the previous races I struggled there. I could fix this problem and had decent starts. My speed is still well. Like you said, I had a solid day. I’ve won races and now I was sixth, third and off the podium. It’s all about being consistent. There are so many to go. Everybody has these kind of days and I’m happy I made quite a solid result out of it. I could have followed Tim or Tony in the second moto, yes, but at least I got Romain with one lap to go. That’s already a big goal, because we stayed the same all race. There you see how hard it is to pass.

That was something I wanted to ask you about actually, because you said that you had an idea of what was causing your second motos to slip a little bit. Was that something with the bike when the track gets rougher or with yourself?

Actually more myself, not so much the bike set-up. It came from myself. Maybe you remember that in Faenza I had some tough times, like mentally with private stories. I went fine through it, but it seems like now it got me back for some reason and I got the hammer. I feel now that it is starting to become better. I have a full week. I can rest. I can get ready. My body is well. No injury, nothing. I’m really fit. Even now after the GP I feel so good. I feel like I could go for a third moto, to be honest. It’s tough. Many rounds to go, if all goes through. I am not worried too much. I’m just going to keep pushing and do my best.

How did this triple header compare to Kegums and Faenza? Were you more bored of this track? Was it a bit more fun? Is it just the same old thing now?

We get used to it now a bit more, to be honest, mentally. You know you race three times. You know you have the same procedure three times. It’s getting more normal. Clearly this track has been one of the toughest, because mentally it was really hard. You know at the start gate that it’s all about the start. In Faenza you could make some passes. I came from tenth or twelfth to third or second and many others did, but here nobody did that. It was just mentally a lot tougher, and the track was kind of sketchy and easy to make small mistakes. I think everybody had mistakes. Nobody was mistake-less. I think nobody was on the podium three times. I’m not sure. I think until now nobody reached that.

Only one person has gone 1-1 all year, so that shows you what the series is like.

Yes. Everybody has these up and downs and that’s just how tough it is with that triple system. Two more to go.

Sure. The start is something I work on every day. I think the test track has never been that busy in MXGP. If you go there the day before the races or even ten minutes before the start, everybody is there just to get that start dialled. I had two good starts today, just one start I was third. The other one I turned out fourth or fifth. I was up there, but the air is just so thin. Even Prado, he’s the holeshot king but he does not holeshot in MXGP by a bike length. There you see how tough it is. He is one of the best starters in the world, in my opinion. The start… We are there but we can do better, of course, and we will push for that.

Random thing that I have been wondering for a while. Your thing is you do not like to know the championship standings and don’t want anyone to tell you that. This has now been on my mind. Does your entire team know that? Do you literally have no clue what’s going on? Surely you must see it somewhere. You came into the press room yesterday and I had EMX250 standings on my laptop. That could have been MXGP! You could have accidentally seen something. Do you genuinely just have no idea what’s going on at all?

I have no idea. I’m really good at just avoiding it. I get tagged on my Instagram…

That’s what I’m thinking! If I went on MX Vice now, put the championship standings up on Instagram and I tagged you… You’d see that, wouldn’t you?

Yeah, I would see it. The moment I see championship I just look away though. I don’t see the points yet, because you need about ten seconds to understand. Like I said, on my Instagram I get tagged and I open it. I am like, “Sh*t, this is the standings.” I close it right away. I just don’t want that sh*t in my mind. Anyway, you have the pressure. You know you are there kind of, but you do not want those points in your head. It’s just going to make you confused. Okay, my team for sure check it. They know not to tell me and my mechanic does not care that much, which is good. That’s motocross. Many rounds to go. Everything can happen. I just try to focus race-by-race.

Yeah, it was. This also took a lot of my emotions and stuff last Sunday. I won the GP, but I basically just stood there and felt stupid. I tried to support him, because it did not look well. I’m really, really happy it turned out this way. We will have the old AJ back quite soon. He knows everybody, he can talk and he can be funny again soon. He is my rival, but we had some good memories in the team together with Hunter [Lawrence]. We had such a good time. I still see him now. He lives not far from me in Belgium. He’s a really nice guy. The last thing you want to see is something like this, but really happy it is going in a good direction.