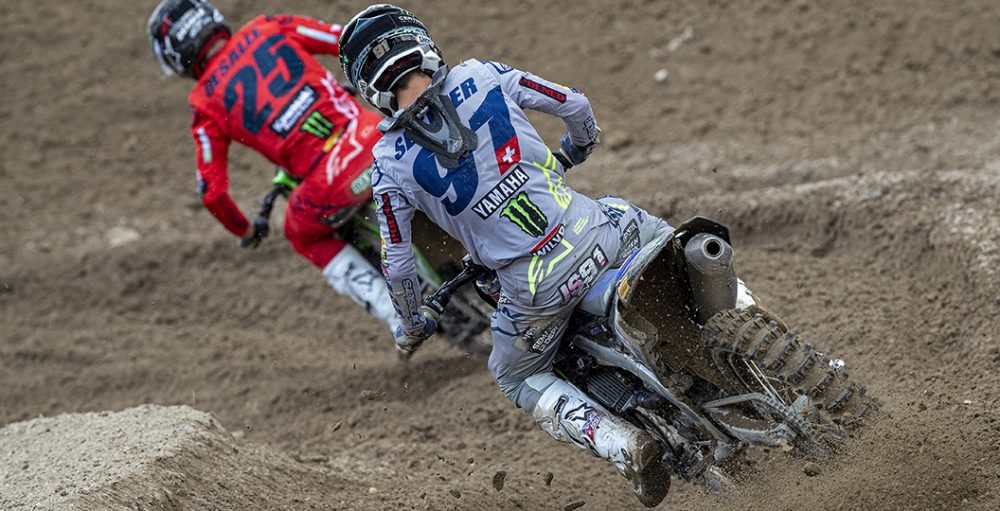 Jeremy Seewer experienced a whirlwind of emotions at the Grand Prix of Lombardia, but the day eventually ended with his first premier-class win. Seewer was handed that triumph over two hours after the chequered flag flew, believe it or not, and even had to stand atop the podium at that point. How did Seewer recap the odd turn of events at Mantova 1? The Monster Energy Yamaha Factory MXGP athlete dissects it in this exclusive MX Vice interview.

How do you feel? You have won your first MXGP overall in maybe the strangest circumstances that anyone has ever experienced.

I did. This, I think, did not happen for a while. Just talking about how we finished the moto, I would not have won clearly. I would have been second overall, which is decent, but not what I wanted. Rules are rules. They clearly jumped on yellow and the rules are there. You can tell me what you want. It’s just fair in the end to make it happen. It seems like I was in the right spot at the right time today. Sometimes you are lucky and sometimes you are unlucky. Today I was lucky. That’s how it goes in racing.

Think about the amount of times in your career that you have just missed out. This is kind of like payback.

Yes. I’ve had some struggles. I’ve just missed out. I was close in Faenza but made a mistake. Now I just had all the luck on my side and it feels like it came back.

Before the penalties and everything that happened, your day was really similar to Faenza 2. A clear win in the first moto, with everything under control and nothing to really talk about. An average start in the second race. A weird crash. The crash in Faenza was weird and so was this one. Battled back to sixth, I think, today. I guess that was frustrating to have history repeat itself.

Yes, I know. What can I say? I agree. I wish I could do the same as I did in the first moto, but it’s just so hard to repeat in this level. It’s always small things that can cost you many positions. You saw [Tim] Gajser eighth in the first moto. Second moto he wins. Tony [Cairoli] third in the first moto. Second moto out of top ten. That shows not only I’m struggling. They have hard times to be consistently in the top two or three. Only Jorge [Prado] always get the starts, so he is up front, but many others struggle for the same point. Of course, I would love to do a 1-1 or something. There are some world champions out there trying their best too.

I think this is the weird thing. I was thinking this when I was talking to Tim earlier, because obviously he went 8-1 or whatever he did. All anyone ever really yells about is you need to be consistent to win a championship, and normally that would be top three every race. Before that was a lot easier than now. Now if you can be top ten in every moto, that’s kind of the best consistency you can hope for.

Exactly. It just changed. Also the one-day format, everybody is more flow. The racing nowadays, it’s just changed a bit. A sixth or something is not something really bad at the moment, like you said, because everybody has it. That’s just the game, even if it’s weird. We need to play with this.

I was quite impressed with how you came through in the second race after the crash. I thought that was decent again, with decent speed. Kind of proved that had you gotten the start, winning again wouldn’t have been a problem. It’s not like you were off the pace, just put in a bad situation.

No. I know my pace even was quite strong in the second moto, even with those two crashes and passing people. This isn’t the problem. It’s just you need to start. Especially here, you need to survive after half moto you should be in the top three if you really want a shot at the win. Even if you are second or third, to pass is just so hard as we knew and we saw in Faenza with Jorge. That’s basically the point.

We just started another triple header. I feel like this triple header will be… I don’t want to say more fun, because that’s a weird way of putting it. I think this will be better for you guys, because the track is a bit racier. It won’t be three races of follow-the-leader. There are more options out there, but also getting out of here healthy is going to be important. We already saw today that it is sketchy with hard square-edged bumps. I can only imagine that’s going to get worse.

Yeah. The track is really sketchy. We know this. This is Mantova every time. Strange. The bumps are so short and square-edged, but hard underneath. You do not really know what the bike is doing, kicking everywhere. Really weird, but for all the same. Today AJ had a gnarly crash. I hope he’s fine. I wish the best for him since he’s kind of a friend of me, being his teammate many years ago, so it’s not nice to see.

Weird day, weird result and weird interview. You have just done it two hours and a half after the final moto. How weird was that? It’s quite dark. I’m guessing they kind of wanted you to have big smiles like you’d just kind of come off the track. I guess that must have just been the most awkward thing ever.

Yeah, it was weird. I went there with my second-place trophy. Glenn [Coldenhoff] was waiting and it was like, “Here’s your trophy.” He was so happy, because he was off the podium and went into second. Jorge was like, “Here is my trophy and also the champagne.” I said, “I have a bottle already. What I do with it?” It was for Glenn, because Glenn did not have one. I was like, “Here is your champagne, already half empty.” Weird. I think even [Joel] Smets, he was there and has done some GPs. He said he never saw this. This is the first time he’s seen this.

Normally when they change results, I don’t think they re-do the podium. If this was a normal round then you would all have gone home by now, because people would have had flights and stuff.

I think so, but they just felt maybe bad for me. I won the GP for the first time so they wanted to make it special. I don’t know.

I guess the next one will be your second GP win ever, but I feel like the excitement will still be the same as it was today or it should have been today.

Sure, it will. During these times standing on the podium, it’s nice. You achieved something.

You did it twice today. That’s nice.

Yeah. It’s not really special seeing as you can’t really share the moment with fans. Just without the fans as everybody feels it’s a bit different. Even winning a GP would be so amazing to share it in front of a huge crowd, but this is just not the case at the moment. It’s for all the same, so that’s how it is.