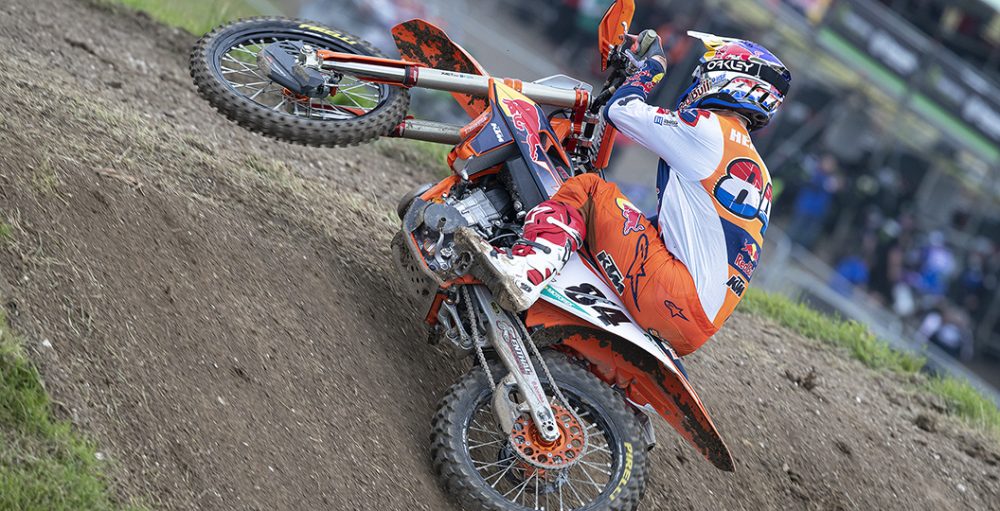 Jeffrey Herlings has enjoyed a consistent start to the 2021 FIM Motocross World Championship – the lack of wins has dominated headlines though. It is certainly uncommon for Herlings to not win a single moto at the first two rounds. Heck, it has only happened twice before (in his first year as a professional and aboard the KTM 450 SX-F). This is no accident though. It is quite clear that Herlings knows he is not yet ready to push the limits and would rather stack points on his off days. Is that not what everyone has wanted him to do for years?

Herlings discusses his mentality, why he thinks he is a little off and more in this insightful MX Vice interview from the Grand Prix of Great Britain. It is most interesting that he points out the similarities between the start of this term and 2017, a year where he started with no top-ten finishes. If you would rather listen to this interview, rather than read, scroll to the 00:45 mark in the player below. The post-race podcasts, presented by FLY Racing, are on Apple Podcasts, Spotify and all major platforms.

MX Vice: A solid and consistent day. A tick off the leaders, but you got solid points. It could have gone bad quite quickly, with the weather and stuff, so I do not think there is anything to complain about.

Jeffrey Herlings: I think it was pretty solid. Unfortunately, with my speed, I am a little bit off. Not much, like I think it was around 15 seconds in both motos. It is definitely 15 seconds too much, but I feel we can still improve. I had a lot of injuries and I feel like I do not take the risks like I used to do. It got really slick in the second moto and I was just like, “Alright just bring it home and try to take points.” I know that if we are at every single round then we will be close at the end of the year, to a championship hopefully. I was on the podium last weekend, in second, then it was a podium this weekend for third. Losing points on Tim [Gajser] – I already think I am like 15 [points] behind, so that is getting more and more. I know that Maggiora will not be my favourite track but after that my tracks will come like Oss, Kegums and Lommel where I would normally perform a bit better.

Was there anywhere out there today that you felt guys like Tim and Tony [Cairoli] were making time on you? Anywhere where you could just see that they were a bit better?

I think just mainly everywhere. Everywhere they were just a little bit better. I could have said that they scrubbed harder or were more aggressive, but I just think it was a little bit everywhere. I just came up like half a second short every single lap. It is not much but still too much.

I would like to be 100% fricking all year long! I think that physically I am good. You know, we had a good winter or spring. Whatever you want to call it! We started riding already at like the end of October or beginning of November and kept riding until, well yeah, basically the first round. We have been doing a lot of laps! I just feel like that intensity… I am not aggressive enough in the beginning because I have just been spinning laps and laps and laps. I have never been with those fast guys and, yeah, I think that is a little bit of what is missing now. Not only that but I have not raced that much in 2020 and 2019 – I did like 10 or 12 races. I really feel like I need to race a lot with those boys again and be up there with them every single weekend, then just try to get better. We should not lose too many points.

I feel like it is one of those where you will win a moto or go 1-1 next week or at Oss, then that will be the thing that flicks the switch. The thing that makes you go, “Oh! I’m back to normal.”

I hope it goes like that. I remember in 2017… I was off at the first six rounds. I was just like riding horrible. I mean, the bike was great. Tony was winning with that bike at that moment, so it was 100% myself. I was just so far off finishing tenth, twelfth and fifteenth. I went to Valkenswaard and got on the podium, then the next weekend I won. I went 1-1 in Latvia and then I podiumed like so many in a row and even won like the last six rounds. I think, yeah, we just need that click. I have already been on the podium at the first two rounds, luckily, and I was not finishing fifteenth. Furthermore, I am physically fit – my foot definitely bothers me a little bit. It is not like that is really making me ride slower or whatever, so it is alright. Yeah, we have work to do. We just need to get faster.

Two podiums to start the year – that is good. Like, what more could you ask for?

I am being positive here. Come on! It is funny, because everyone has always said that you need to be consistent and just take podiums. You are doing it, right? Now everyone goes, “Why is he not winning? What is he doing?”

Yeah, and that is what I tried to prevent this year. I am happy, like even this time I was a bit lucky with the podium that Tim passed Febvre on the last lap. There is no luck in motorsports though. I was leading the championship like three or four years, then got injured and did not win the championship. People would then say those guys won the championships with the luck. Things like that are happening in our sport. People are like, “Hey! Why are you not winning?” I am like, “I am happy. My foot is terrible.” Well, it was terrible after the accident and then I was almost eating milkshakes for the rest of my life after Faenza. I am happy to podium for now and when I feel like I am ready to start winning I will start putting that extra bit of risk in there. For now, I just feel like I am a little bit off. Nothing to do with the bike – the bike is absolutely great. It is fast and pulling good starts. It is just me, myself, and I. I need to improve a bit.

A completely random question. I literally thought of this in like February. You were amazing in 2018 but you pretty much killed yourself to get to that level. You looked like you were dying – you were not very happy. If I said to you that right now you could go through that again and get back to that ridiculously high level, which no one may ever get to again, would you do it? Would you rather just be like a tiny one percent off and a bit happier?

Well, I enjoy life more now. I had a plan at that time – I would wake up, measure my food and train like an animal. I would be training and if I knew a guy in like fifth place rode four times this week, then man I was going to make it five. I had to do everything super extreme, and I did not weigh so much anymore. I was just training, training, and training. I was so super tired. I killed the competition that year though! I feel like you can do a few of those years but you cannot do it like Tony with 18 years of racing. It is difficult. I have already done like 11 or 12 years, since 2010. It has been a few years for me.

I enjoy it more now. I enjoy being here and I enjoy going home. Instead of putting in intervals on Monday morning, I just take a little spin and go for a little cycle. I enjoy it a bit more. Maybe by doing that the results are a little less for now, but I think the enjoyment for a full career will be better. You might be able to do it for a few more years. I get hired to actually win races, so a podium is good for now. We should definitely improve and become better. I am on a great team with a great bike. The bike is capable of winning, so it is just me letting it down at the moment.