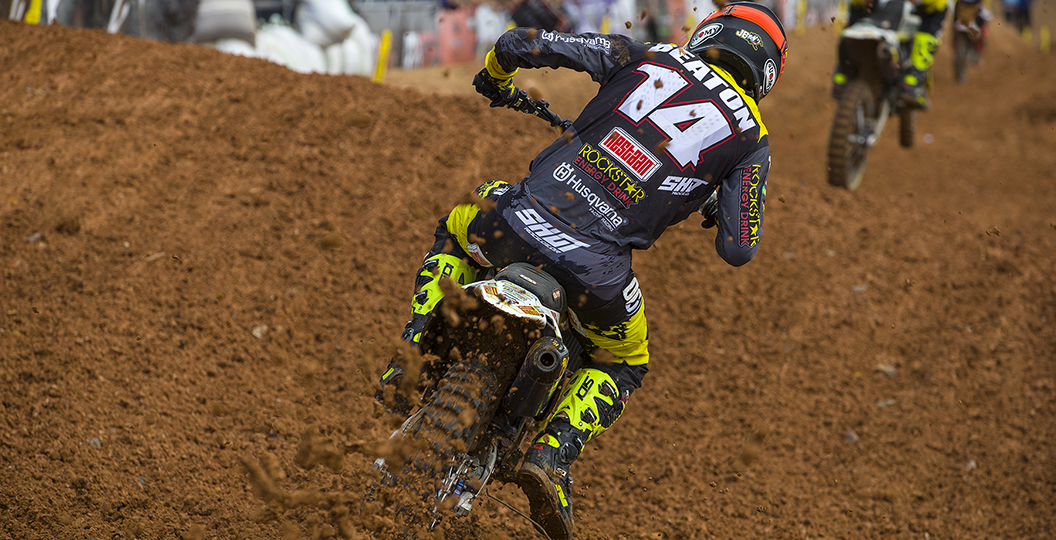 Jed Beaton is quickly becoming a contender for podiums in the MX2 again, following a lengthy rebuilding process that included overcoming multiple injuries. The Grand Prix of Indonesia, where he finished fifth overall, was another massive step in the right direction, as he explains in this exclusive MX Vice interview from Palembang. Beaton covers that, as well as his road back to the front after such a turbulent twelve months.

MX Vice: Solid weekend for you. I think it was another step forward. Germany was that next step up, then today was that step up again. Now I think it is podium time.

Jed Beaton: For sure. I think the ball is starting to roll and it is all coming together, which I’m really excited about. The starts are much better. Just the whole package is really good at the moment. I have been training really hard to just get back to the level that I want to be at. It’s been a while since I’ve been up here.

I showed in the second moto that I’m so interested in getting on the podium, but it’s that hot here. I ran out of a bit of steam. It is what it is. Starting to feel really good on the bike again and looking forward to next weekend already.

Even though you ran out of steam in the second race, you still proved that you have got the speed and that is kind of the first mental challenge. If you know you have got that, you can do it next week, Loket or any week.

Yeah, for sure. That is the whole thing, the mental game. It has been a pretty sh*t start to the season, I am not going to lie. I had a fair few injuries and just little things. It is all building back up to be very solid again. I’m starting to get where I want to be. I’m really happy about that. Like you said, it is also mental knowing that you can do it now.

It’s been a long time since I have done it. It’s for sure in my head now that I can do it. The starts can be improved a little bit again. I got wheel spin in both motos. I don’t know if the grid is different… I’m not sure. Like you said, I had the speed but just ran out of steam. Obviously, everyone did. What can you do? It’s freaking hot.

It’s not surprising that you ran out of steam though, because look at it. The last time you battled in the top five was, what, a year and a half ago? Germany was good, but you were still just a tick off that lead group. The intensity, the speed and all of that was always going to be a shock to your system.

Yeah, one hundred percent. It’s probably been since Matterley [Basin] last year where I was running at the front and ended up breaking both my legs. It’s been a long time to get the recovery and just get comfortable on the bike again. It was obviously a big injury. I was sat on the couch for so long and I could not do anything. I’m just looking forward to the second half of the season now and really building on the results. Hopefully I can be up on the podium a couple of times by the time the season is out.

Are you at one hundred percent yet? I am guessing you have not been all season, but is this at least as close as you have been?

Yeah, for sure. This is the closest I have been. Obviously two weekends ago in Germany, it was a step in the right direction and again today. It’s all going the right way. The team and I are happy. I get frustrated with my results, but I have got to be sort of calm about it. It has been a big injury, like I said. There is not much I can do about it but just be solid and build and build every weekend.

To be honest, I feel like this weekend has been the best from the Saturday and the Sunday. It’s been pretty decent the whole weekend. There was not like a session where I was really slow or anything like that. For sure, so many positives to take away and build on for next weekend also.

I guess as you build up your speed and your pace, that opens up another can of worms with the bike. You have never ridden this bike or pushed it this hard, so then I guess you realise that suspension and stuff needs changing a bit. That’s another challenge, I guess.

Yeah, for sure. It’s all a bit of a challenge like that, but it’s probably a good thing that Thomas [Kjer Olsen] and I are kind of the same size and kind of the same style of riding. We know how to set the bike up. He’ll come in with different ideas. We have obviously got one of the best suspension technicians, so he knows what he is doing. It’s just a combination of everyone and everything that’s going to put it together.

What did you think of this pop-up track, honestly?

To be honest, it was a lot better than what I thought. Looking out of the motel window, it looked quite small. The lap times were low, so I was pretty much getting dizzy. I don’t know if that was from doing so many laps or the heat this weekend. It was decent. The dirt was half good. I cannot really complain about it. It just would have been nice if it was a little bit longer.

This is obviously your home MXGP. Have these guys treated you like one of your own? You look like brothers, really.

I would not say that. I can’t really speak to them that much. They are all pretty happy when they do talk though but, as you can see right now, they are pretty much more interested in my girlfriend and taking photos with her instead of us, so it’s not gone too well.