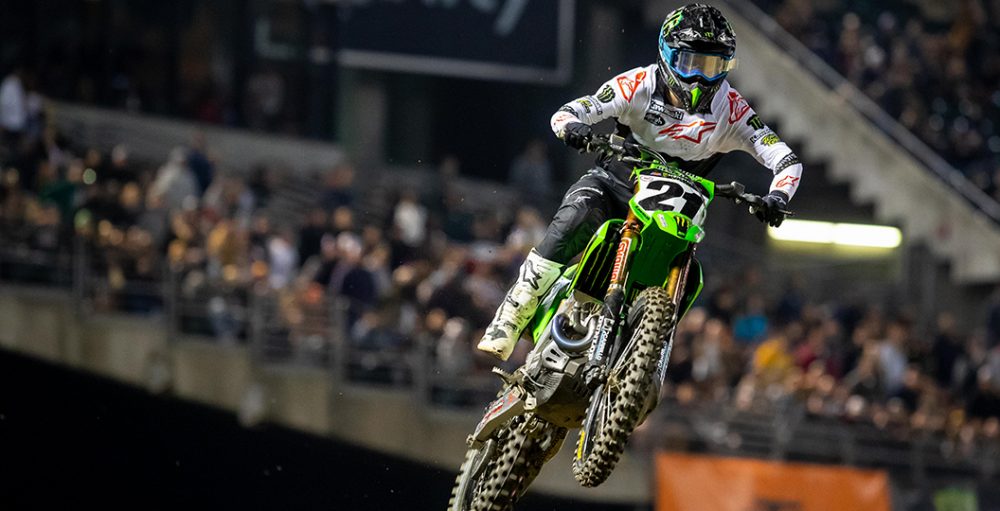 When Jason Anderson reached the chequered flag first in the 450SX main event at RingCentral Coliseum, it marked the end of a significant drought. It had been 1415 days since he last won in Atlanta on March 03, 2018, and that was an event that made use of the Triple Crown format. One could argue that was not even a true main event victory! Such a conversation is irrelevant now, as he sealed the deal at round two of 2022 Monster Energy Supercross and catapulted himself into the title conversation.

It is baffling to consider that a 10-1 scorecard places Anderson just three points from the red plate. Even more surprising is the fact that he could have a commanding lead now, had it not been for that scuffle with Justin Barcia at the opening round. Such a strong start is not something that a majority of fans envision and Anderson tackled that in the post-race press conference, as well as other hot topics like the switch to an aluminium frame and the way that he keeps himself in the shadows.

Forty-seven races since the last win – that is quite some time! I have to imagine that was a big one crossing the finish line.

Jason Anderson: Yeah, you know man, it has been a while. I even had some close ones. I almost won that race in Salt Lake City and, yeah, the last time that I won I felt like I was on top of the world, being able to win that championship and stuff. Being able to come back… I am 28 years old and getting older, but being able to know that I have still got it and can still win feels amazing. 47 races is a long amount of time to go without a win, especially with all of that work that we put in. We did it! Now I just want more.

It has been so long since all of this. At what point in the off-season did you feel like, “Hey! I think I can get a win in my first year with this new team?”

To be honest with you, I always felt like I really had the talent and speed to win. It is just that I have not been putting it together. Last year I only had two third places, you know? I only had a handful of top fives and, honestly, if you look at it then it kind of seemed like I was on the decline. For me, I always believed in my talent and everything like that. No matter what I just kept believing and trying every day. Just trying and trying and trying. It happened! Do not give up, I guess.

How long did that main event feel? Aaron [Plessinger] was putting some pressure on at times and you had to get around your teammate. Since you had not won in a while, did you feel that pressure? Did it feel like it was taking forever to finally get there?

I did not even know that AP was behind me for the longest time, to be honest. I was racing and I was kind of gauging off of Justin [Barcia], just my pace and everything like that. I looked up to see how much more time was left in the moto and I saw AP. I looked back and was like, “Dang! He is really close to me. I better get going.” We held it together.

Your speed was really good last week and you obviously won this week. Did you expect to adapt to the Kawasaki aluminium frame this quickly and to get a race win? I’m sure you feel like you can contend for this title.

With the Kawasaki, I have really had days where I am still trying to figure it out. I rode the steel frame for so many years, so I knew what it did good and what it did bad. Riding this bike, I am still learning it day in and day out. I feel really comfortable on it and felt good in the off-season. I obviously had my bad days where I did not feel that good – my good days were really, really good though. Just working with the team and stuff, we have really progressed every day. Just the dynamic and way that they go about improving from day to day is what I like. They brought me in and we work together really well, so it has been awesome. It is not a surprise to me, but I am glad that it is actually coming as good as it is and happening.

In your body language on the motorcycle, it seems like there is a lot more intensity in your racing as well as actions in training and stuff like that. What has opened that up for you?

Honestly, I feel really comfortable on the bike and, for me, I feel like the beginning of the race has always been really tough for me. You know, getting starts and putting up that intensity to get out front. I think that is something that I have been trying to address, just personally to get better, and I think it is working. I am just going to try and keep up the intensity, but also make smarter moves. It is tough to have a balance, but that is a part of the game.

I got most of my aggression out in the first couple of practices, so I had to calm it down just to not make a trip to the Alpinestars medical unit. I figured it out and did not really change much, just calmed down and that is about it.

On the podium, you brought up your grandmother and your grandfather. Obviously, that is a very personal issue. Your personality is not something that we get a lot of insight into. You do kind of keep to yourself when you can. Talk to us a little bit more about the emotions of being back on the top step of the podium and what racing means to you.

For me, racing is my number one thing. I have done it since I was so little and it is obviously a family thing. My grandparents took me everywhere, so if it was not for them… For me, it is really something that I would feel lost without if I did not have it. Even through tough times or whatever, I love it. Fail or succeed, I just want to keep trying and keep racing. I love being in the paddock, as much as I do not let people into my life. As much as I dodge all of you media guys and do not want to do interviews with you, I still love racing dirt bikes and that is how it is.

How different was your bike set-up tonight compared to Anaheim? Were there a lot of changes made during the week?

One clicker on the preload on my shock and that was it. Oh, and a new set of handlebars for the main event.

Can you just describe to us how challenging it was to figure out the long whoop section in the main event? The rut in the middle got gnarly. I saw that you switched it up and blitzed down the right side two laps in a row, then went back to the rut. How was that balance, trying to figure out what worked best for you?

I was even telling AP that I tried to switch it up a couple of times, because that rut was really hard. It was like a balance beam trying to go through that thing! I was trying to do something that gave me a little more freedom to where I was not just tense riding through it. I did it one time going around a lapper, then I thought that I would try it again and thought, “Nah, I will just stick to the rut and go patient through it.” It was tough though.