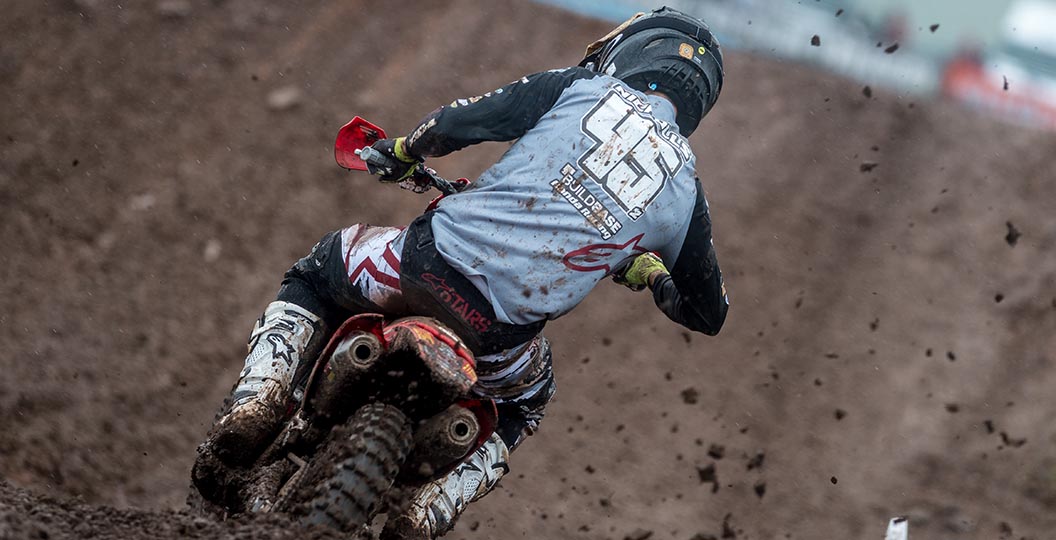 A mud race is the worst thing that can happen to a championship leader, as so much can go wrong. Jake Nicholls was unfazed at the fifth round of the Maxxis British Championship, however, and had a consistent ride that left him in fourth place at the chequered flag. Nicholls discusses that in this exclusive interview, plus a handful of hot topics.

MX Vice: One moto today, a fourth, with the mud and all of that. You had the most to lose, so looking at the bigger picture it was a pretty solid day considering the conditions.

Jake Nicholls: Yeah, it was not bad. It was a lot on the start. I got a decent start. I went really wide in the first turn and kind of blew getting the holeshot there. I was sitting third and I was really trying hard to pass [Ivo] Monticelli and it was difficult. This track is quite difficult to pass on anyway and obviously when it was wet like that… I was pushing hard and trying to desperately get past but not to crash at the same time or cook my bike, because obviously I was getting so roosted.

My goggles were getting bad, so obviously the rads were getting bad too. I kind of backed off a little bit and then had a little, not struggle, but I was just finding my way a bit. Brad [Anderson] got by and I had some good lines after that. It was one of those ones where it was like, “Do you push and then risk crashing?” I had a couple moments I was struggling a little bit with my shock. It pushed me over a few lines and I thought that actually fourth is not too bad. It is one of them, really.

You and Brad got close a couple of times when he went around you. Was that kind of a wake-up call? Did that make you realise how much you had to lose?

A little bit. I obviously did not want to lose another spot, because I knew Bobby was out front, but at the same time I am not riding around thinking about the championship. I just did not want to lose a position, full stop. He had some good lines, so once I started copying him then I got close and got really filled in again. I was just struggling, like everyone, with vision. I would say it was like have fourth and not cook my bike much. Everyone’s bikes were obviously getting hot and mine included. It was not too bad.

After the finish of the first race, I saw you look over at a backmarker. It looked a little… Not aggressive, but it looked like you were unhappy. What happened there?

I think Brad and Monticelli had it bad on the last lap with lappers too. I know it is not their fault and they are racing or whatever. There were a couple of my mates actually racing just in front. I think they got in Brad’s way. It is no issue. The guy that held me up was on his own. In two really slow corners I shouted at him and he still carried on racing, which really annoys me. I totally get it. I have been in the same position. I have been lapped in Grand Prix and whatever and you can only do so much, but when you are not in a battle… It’s like, “Get out of the way.” He just did not and then filled me in so bad. I was just really angry after.

Was that the end of your race at that point? Obviously if he filled you in and everything, even if you wanted to make another charge I guess your hands were kind of tied?

Yeah. I think I had about a half a lap left to go. It was more just the principle of it. I did not lose or make any ground either way, but it was just like… “Get out of the way.” Especially, like I said, he had a chance to hear me. I know the blue flag situation when it is like that is out of control as well. I was getting waspy.

You saw the conditions the MX2 race and all of that. Are you okay with it being cancelled? You would like to get out of there and muck in like an old-school racer and all that, but do you feel like it was a wise decision?

I think so. The vision is bad here. Obviously, with the way it is so open around here the mist is coming in. I was just looking at the start a minute ago and obviously the ruts were full of water, but I also could not see to the first turn near enough. It is one of them that could go either way so easy. I had my mind set before I went out there and was ready to have a go obviously, because you cannot be thinking about them cancelling it.

It was one of them where if it goes right you could end up with a bag full of points and something could go wrong with the other riders, but at the same time it can easily happen to you as well. The bike situation when it is like that… Our bikes are all so good and they are not really designed for this stuff. Get our radiator packed full of mud and then they do not breathe, so I can understand why they did it. I am not mad about it at all. I was up for it either way, really. It is one of those things.

Three rounds to go now. Is the situation starting to catch up to you a little bit? Obviously, you have got twelve points now. It is kind of enough where it is not super stressful, but then it kind of keeps you on your toes I guess. You cannot afford to just back it down and cruise around.

One hundred percent. At the same time, if I had a fifty-point lead I would not be backing it down either. It is just how it is. I will be racing the next few rounds like I was at the start of the year. Just going for it, trying to get wins and just have fun really. Not thinking about it too much. You cannot help almost but think of it when it is like this, because it can go so wrong. [I am] just enjoying it. It is a shame there are not that many races for us the next few weeks really. It is a bit quiet.

RedBud happened a couple of weeks ago now. The experience was amazing, obviously, but what about the track prep and the way everything was run surprised you, both in a positive way and negative?

The event was cool. I much prefer it being a one-day thing. I really liked how you only had two laps of practice then you were straight out into it. I feel like at these events people just ride around for like four laps and I just do not get it. The amount of times I nearly hit people in the early laps where they are riding so slow, so that was good. The only thing I did not particularly… The track actually was not as great as I thought it was going to be, in terms of prep. Between the races they left some turns that were just pants.

There were no good lines or anything, but from what I hear that was just the worst I guess it has ever been there. I have watched so many videos and I was a bit sort of like thinking, “There are berms there and here.” There was just ruts everywhere though. It was like Culham for the first round almost. That was good. I was really surprised how helpful everyone was there. Just way better on one day than Grand Prix.

Finally, ‘Nations is coming up and I guess we are going to hear soon. Have you heard anything either way? Anything you can tell us?

I have surely sealed the position now? I got fourth today. I beat Tommy! No, I do not know. I saw Mark Chamberlain two weeks ago at Stuart Miller’s wake and he said he is going to make a decision in the next three to four weeks, so we will see really. Just keep doing my bit and hope to get picked. 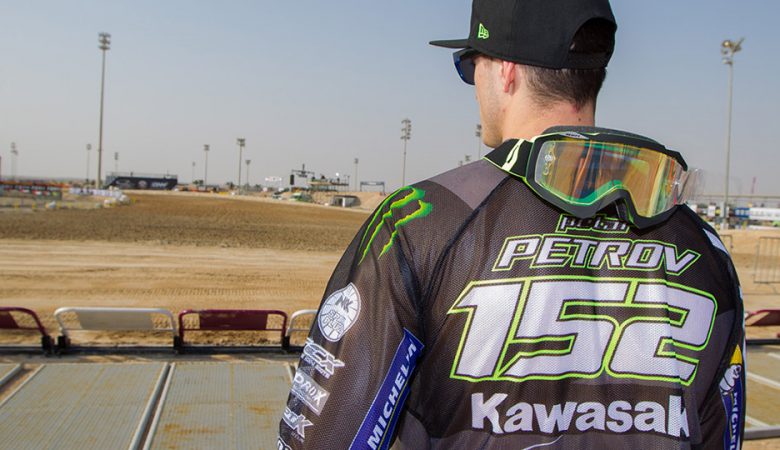