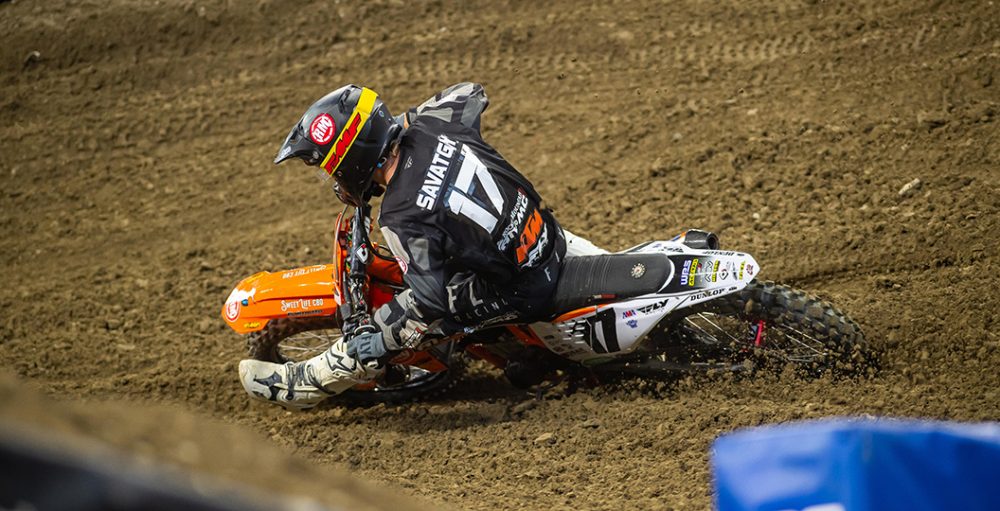 The Rocky Mountain ATV/MC KTM WPS squad has been named ahead of the start of 2022 Monster Energy Supercross; Joey Savatgy will be joined by new signings Shane McElrath and Max Anstie. In a rather unique and exciting announcement video, produced by Rocky Mountain ATV/MC, team owner Forrest Butler tackled a lot of interesting points and shared some insight into what the future holds. There are a lot of changes going on behind the scenes, with Michael Byrne departing and technical changes being made.

Butler also looked at the past and tackled the Blake Baggett situation for the first time. Speaking publicly, he stated that there was no lawsuit as heavily rumoured and things ended amicably between the duo. Baggett was supposed to race for the team this year, of course, and had a deal to do so, but disappeared from the roster just days before their pre-season announcement and has not been seen since. Baggett has been a mystery for quite a while now.

“Nope, no lawsuit,” Butler confirmed in the team’s video. “I think the lawsuit came from a lack of info to media and fans, at the end of the day. What was tough was COVID-19 in 2020 was so hard on the industry and the world as a whole. Just boxing back down into our industry, we had so much go on. There were no fans and when there are no fans there are no fans. You have got sponsors falling out left and right – there is so much going on and you do not even know what is coming or when you are going to race. I cannot talk about money, riders and sponsors directly.

“What I can say is we took a haircut – the team took a haircut and staff took a haircut. Tapping back into your question about what I meant by lack of info to the media, I just meant in general. All teams in general. COVID-19 just got so tight, the year got tight and nobody really knows what to say. Teams drop out and things like that. I think that is just something in the future that the teams, the media and the riders can work together better on. There is not so much finger pointing at the end of the day. The fans do have a right to know what is going on out there and that is just what I meant by that.

“Every sponsor was different. That was just the dynamic – the same as the world – and in our industry teams went [away]. You had sponsors all over the place. There were excellent sponsors and great sponsors though. Sitting here with you guys [at Rocky Mountain ATV/MC]… This is me really giving props to you guys. You were one of the lead sponsors who stuck to our agreement – you took care of our agreement and carried the team. There were other sponsors who did the same. At the same time, in the big picture, you have guys who worked with you and did what they could do.”

Going back to the subject of Blake Baggett’s disappearance, which is a topic that has been buttoned up now, Butler simply concluded by saying that “we parted ways amicably.” A happy ending to all of the speculation. The Baggett topic has been beaten to death at this point and consequently it wasn’t the most interesting point to arise from the announcement video. Butler had some interesting things to say about the engine package that the team will have in 2022 Monster Energy Supercross.

“There are a lot of rumours out there, but this is what we are really doing. We have renewed with KTM Motorsports and KTM North America for the next two years, though 2023 also,” Butler confirmed. “This is actually going to be pretty cool. This year will be our tenth year with KTM on the factory programme and level, you know? In that programme we are kind of going the mould of being a little more independent. I think that at KTM, with Husqvarna and GASGAS, the programme is growing so big. We were just ready to take a direction… What they provided for us was unreal.

“I am not going to get into details, just for time reasons, but they are juggling a lot of teams and everything is spread. For us, it was really just a question: Can we take over managing our own suspension and motor programmes? We have protocol to follow in there, because at the end of the day we all want to finish on top and not go backwards. Yes, we are. We are going to be doing suspension and motors. It is not going to be as crazy as people think, because suspension will still be through factory WP. We will still be on WP works parts. We are really excited about that.

“We are responsible for our own suspension, that would be a better way to term it this year. It is very important for everyone to know that we are still KTM. We are still KTM orange – everything is the same with contracts and we will be parking next to them in the pits. We are a full KTM support team and all of that. What is best is we can show what the bikes can really do now. People have an outside perspective that, ‘Oh, they are doing good because they are on the factory bike too.’ We are going more independent to show you that this is the bike.

“We are going to do our suspension and engines, like Mitch Payton at Pro Circuit. They have been around so long that we do not really think about it, but Mitch is Kawasaki’s 250F factory programme. It is Pro Circuit, so who does the suspension? It is works suspension but Pro Circuit is working on it. It is kind of like that. GEICO is gone, unfortunately, but for people who knew the GEICO model then it is the same thing. They got to do their own deal and Star too. That is the team right now! Star pulled that into the 450F class and JGR did it before.”

There is another interesting point to consider. Yes, another one. Ethan Lane, from Great Britain, is going to be the team’s sole 250F rider in 2022 Lucas Oil Pro Motocross. Lane is set to make his professional debut in May, but the venue has not yet been confirmed. MX Sports Pro Racing is expected to release the 2022 Lucas Oil Pro Motocross calendar on Monday, November 07. Pre-season riding has already begun for the KTM trio of Savatgy, McElrath and Anstie.