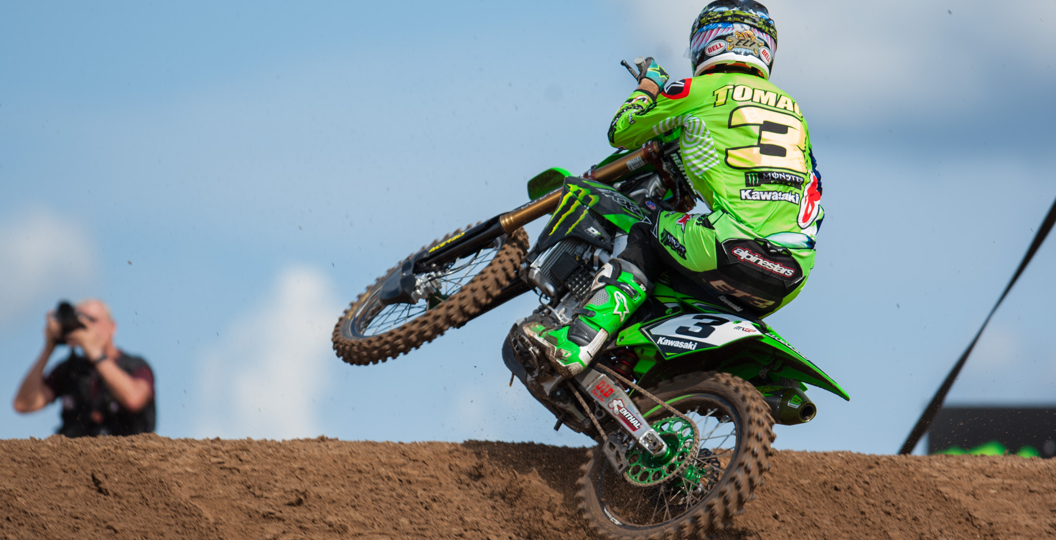 Although Jeffrey Herlings garnered the most attention at the Monster Energy MXGP of USA, Eli Tomac’s weekend may have been the most interesting. The first day of racing was simply terrible for Tomac, who limped to twelfth in the qualifying race, but he somehow turned that around and romped to a clear victory in the first of two motos on Sunday. What changes were made overnight? This exclusive interview covers that.

MX Vice: Considering how yesterday went, I thought today was great. We obviously saw what you can do against the guys. There are no questions now. Everyone was asking those yesterday, but I feel like you silenced some critics today.

Eli Tomac: Yeah. You said it right. Yesterday was a bit of a disaster for us. That wasn’t normal me at all. I was sitting there spinning my head. This place is a lot sandier than I expected and what we thought coming in. Kind of had to go to our Southwick base, if you want to call it that. I got comfy this morning in free practice and we were able to do our thing. I got a good start in the first moto and was able to get out front and sneak away early. It was cool to put in that win. Second moto, Tony and Jeff started in front of me. Those guys were laying down a pretty heated pace. They definitely had a little bit more in the tank than me but, all things considered, it was a good weekend.

Going back to yesterday, in free practice I saw you spend fifteen minutes in pit lane making major bike changes and later heard that was planned beforehand. You came into here wanting to do some testing? Just talk us through the decision behind that.

That was the plan. We had something we wanted to try. It didn’t end up working out, but we wanted to try something and if it would have been better it would have been awesome. Then we could have just focused on our qualifying, but unfortunately it wasn’t better. I kind of wasted my free practice. But, thankfully, we had that time to get better this morning. That being said, the qualifying race is important, too, especially when I was twelfth pick. We were still able to make it work, really.

Is that something that you decided to do after last year? I remember reading a few things that said that you were surprised how much downtime there is and how much riding. Were you more prepared coming in this year and knew that on Saturday you could take your time and just muck around?

Yeah. That was my plan, but I think I was mucking around too much. I wasn’t planning on qualifying twelfth, I’ll tell you that. I knew that you have to take it easy, because you can burn yourself before Sunday. But I would definitely rather be top three or something, for sure, so it’s a learning process.

After you changed your set-up in free practice, did you go back to what you had originally? I heard that you made a lot of changes last night. Was that closer to your initial set-up or the new one?

It was back to my base set-up fork. That is what we were swapping, forks, but then I did some other things to suit the sandier conditions. It was actually a whole new set-up again, but it’s something I raced on at Southwick. The sandier base definitely caught us off-guard.

This was not a waste of time then? This is something you can implement next year, even if it is just at one race? It was useful?

Oh, yeah. It was useful. If we happen to come back here. It was a good race for learning and being able to adapt. We’ll take that and if we end up in these conditions again, we know what to do.

How surprised were you when you got the start from twelfth pick in that first moto? Obviously, this year you have not had many of those holeshots. Once you were out front, did you feel like you were hitting all of your marks like you were at the points this year when you were unbeatable? Did we not see Eli Tomac at one hundred percent?

First moto I felt that is what I had. Jeffrey and Tony, they had a couple of jump lines that I wasn’t doing. It was good enough in that first moto. We broke away early. So, at least we got one back at him there. Then, like I said, second moto they were going fast. Our USGP statistics are pretty good. I think we’re at five moto wins and one moto loss.

That’s the thing that you can just answer haters with. I’ve been doing it on Twitter. Everyone blew up after yesterday, but even when you were struggling yesterday you were still unbeaten in GPs. You can fall on that!

It ain’t over until the old lady sings on Sunday.

Obviously, you do not have many man-made tracks in the outdoors anymore now that Utah is gone. So, what did you think of today? Did you like it? It sounds like maybe they went a bit overkill on the jumps? Even before the second motos they were rebuilding all of the lips and stuff.

Yeah. I would say if you are going to have a flat track, sand is the best condition for it. It gets character to it, but the ramps and the jumps were definitely overbuilt for motocross. They were too steep for that, especially for how sandy it was. A little bit sketchy.

Finally, we’ll take a different stance on the Motocross of Nations debate. To kind of explain to everyone what you have going on, just explain how much downtime you have before Monster Cup prep begins.

I think our Monster Cup race is the second week of October, so if we were going to race ‘Nations you obviously can’t just sit at home and pooch out and then not go try hard for your country. I’m the type of guy if I’m going to do the race, I’m going to go all in and go for it. For us to be ready, it grinds us through another four or five weeks and that’s just something that’s not good for the future and even the career itself. I had to draw a line somewhere on how many races I’m doing in a year.

So, you’ll have two to three weeks off before you get on a supercross track for the first time?