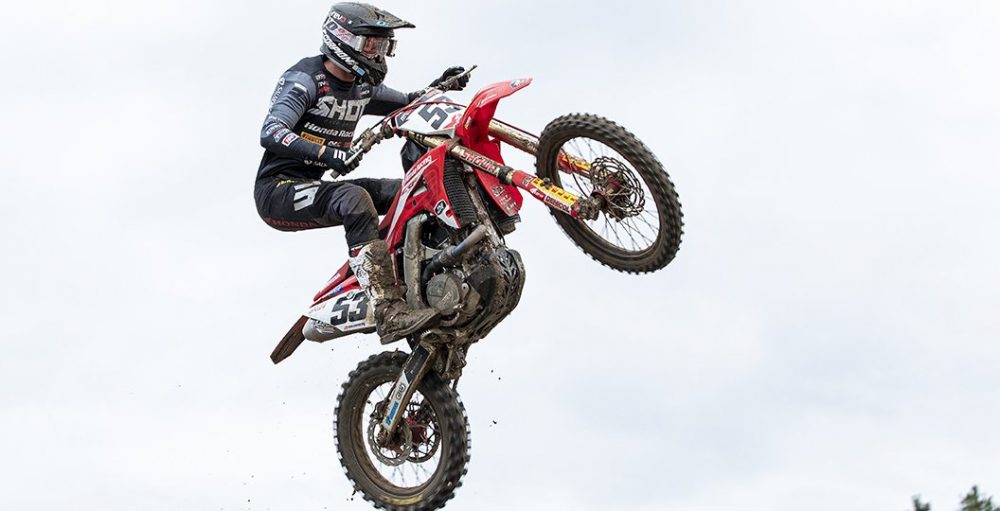 Dylan Walsh has really carried the JM Honda Racing team through their maiden season in the FIM Motocross World Championship, despite jumping on as a fill-in rider in late August. ’53’ has led laps, set some impressive times and opened some eyes since then though. Has that helped him secure a full-time deal in the premier class for the new season? Not yet! Walsh talks about needing a ride, his progress in the sand of Lommel and more in this exclusive MX Vice interview.

MX Vice: First of all, on the week as a whole, you were a little loose to start with, which some people thought was going to happen here. Since then you have straightened out, put in some consistent laps and proven that you can ride anything on a 450F. You have answered people’s questions this week, I think.

Dylan Walsh: Yeah. Well, obviously Lommel has not been so good to me in the past. It started out rough in the first one, but ended up with two solid fourteenths. I turned it around and I feel like I have got better each time. I just tried to make the most of being up front while getting adapted more and more to it.

Can we go back to last Sunday and talk about that holeshot for a second? I genuinely thought Tim [Gajser] had the most perfect start of his life and then, out of nowhere, this Seven gear just came flying around the corner. I feel like that may have been the loosest, sketchiest and bravest holeshot going.

Yeah. I got out of the gate really well. I actually had [Antonio] Cairoli to the right of me. We got out and he went to turn left without looking and didn’t realise that I was half a bike length in front: He hit me and I was like, “I’m not even going to look. I’m just going for it.” I just flung around the outside and pulled the holeshot. I was like, “Oh sh*t.” Leading in Lommel, in that first moto, was a cool experience, but maybe it was not such a good idea. I almost had the second one too, but there was a little bit too much Tokyo Drift going on. My starts are really good. It just shows I can start anywhere, so always good.

I feel like the championship guys in this class need to learn about you a bit, because you know how it goes… Whenever the leading guys qualify worse, they put themselves around guys that they reckon they can drop out of the gate. I feel like guys now realise that lining up next to you is not ideal – they cannot beat you out of the gate.

No. It’s good. Mentally I know I can start next to anyone also and get a good start, so I’m not worried about that. Normally you cannot get such a good start from out wide at an MXGP round, but I’ve been doing it lately. I need to get my qualifying a lot better. It’s something that I’m not so good at, but we are getting better.

I do not actually understand why you are not good at qualifying. You proved that you can run the pace at Mantova, so what’s the difference between that and time practice?

After the hectic first Lommel, did you have a little word with yourself about how you need to straighten this out and prove something this week?

Actually, I was feeling quite bad after the first Lommel. I went into the second Lommel already hurting. I was like, “It’s going to be a long week.” I just tried to calm down and be consistent at the end of each moto. I knew it was going to be a lot better for me. I feel better now. I actually feel better now after the third one than I did the first one, so it’s ended up pretty good.

You need a ride for next year. I genuinely don’t know what more you need to do. You have proven you can lead laps. In America, if you can lead laps then you are golden. That is what every team wants! You have proven you can be consistent all surfaces too. This should have been the worst week for you by far, but again you proved that you can do it. Let’s not forget that everyone in this paddock spent the winter training here. I don’t know what you need to do.

I’m trying to do everything in my world to get a ride for next year and obviously it’s not so easy at the moment. Obviously, this week was going to be tough for me with no winter here especially with the track being so much like winter here. It is just so wet and deep. I’m trying to talk to as many people as I can. I guess it’s my rookie season, but it’s actually only my second season doing GPs. I think there’s a lot I can improve on for the winter and in testing. I’m not so sure what I need to do to get a ride, but I’m trying.

I think this is the thing. I feel like everyone just presumes that you have been here all year and before COVID, but we need to remember that you jumped in halfway through a season. We have had so many back-to-back races that you have not really had a chance to sit down, practice, test things and do all of that stuff. There’s a lot of stuff that could be better if you get a proper base for next year.

Yeah, exactly. That’s been tough not being able to test and not being able to build. Essentially it is race, race, race, recover, race, race and race again. That’s just how it’s been. It’s been really difficult in that part. It shows that there’s a lot of easy things that I can do for next year that’s going to make me a better rider and better results.

I guess we should end this interview, as I’ve shouted a lot, so let’s end it on this note. We are going to Trentino and hard pack. That should be a good place for you.

Yeah, definitely. I’m looking forward to the last three. Hopefully I can end it with a bang and hopefully do something good enough to come back next year.