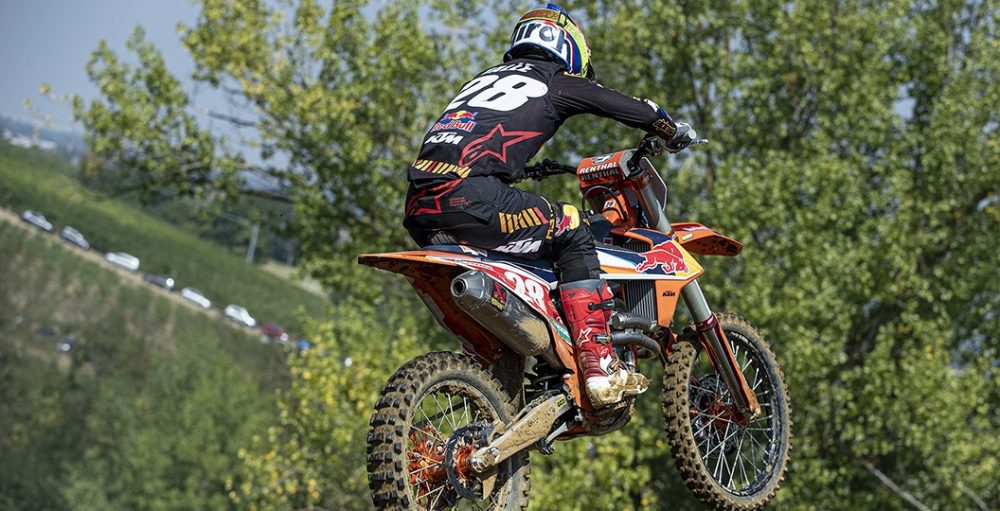 Presented by GreenlandMX: GreenlandMX is known as one of the most specialised retailers for off-road motorbikes in Europe. Their online store offers an impryessive catalogue of the highest quality brands in the industry, with the best pricing to match! The company has experience of more than 15 years in the internet e-commerce world and has now become the go-to company for European customers. Visit GreenlandMX.com to check out their impressive range of products!

Dirk Gruebel of Red Bull KTM Factory Racing had a whirlwind of a week at Faenza, as Tom Vialle strengthened his position at the top of the MX2 championship standings and took two out of three victories. Jeffrey Herlings, on the other hand, was airlifted out of the Italian facility and saw his bid for the premier-class title come to an end. Gruebel covers all of that in this exclusive MX Vice interview, as well as the second triple header in the 2020 FIM Motocross World Championship.

MX Vice: We’ll start with the positives. This has been a really good week for Tom [Vialle]. Once again he showed maturity and like he is a title guy – he knows how to manage the situation when he makes a mistake. He also put a lot of points on the competition.

Dirk Gruebel: Yeah. Today he showed it again. Good start and up there straight away, but then Jago [Geerts] got him and he did not get stressed out. He was watching his lines and tried them, but it did not suit him that well. He found back his own rhythm and went all good until they hit the lappers. They struggled a bit and then Jago was gone. Still, it was second place. A fantastic job. The heat was hard on everybody today. You could see after the race that all of the riders were suffering. He just went in the second race. Good start and went.

[Ben] Watson actually was chasing him, but then he made a mistake. Jago tried until the end but Tom could manage a seven or eight second gap and he brought it home. No gain in points and no loss either. I think for the head it was really important, winning again and winning on Wednesday. That keeps him going and makes him stronger. We look forward to the next races. Not real sand, but also not real hard pack. I think that Jago will have his days and Tom will have his days, but it’s give and take still. He manages very well and really mature. It is nice to see that the momentum is gaining.

Coming into the season, I knew that Tom would be fast. I knew that he was probably the fastest rider in this class. The one thing that worried me was whether he’d be ready to battle for a championship. Imola last year he went DNF-DNF and obviously you cannot have that happen if you are going for a title. Are you surprised how much he has matured in the space of a year or could you see this coming through the off-season?

No. It’s only the second year. Nobody should forget that. Some guys come in and get it in their first rookie season, but it is very rare. We are talking about [Ken] Roczen and [Jeffrey] Herlings, but not even there. It is the same thing with him and Jago. Two youngsters and they are going well. The pressure is all on them. All eyes are on them. It’s good to see how well they handle it, actually. Of course, he is our favourite since Rene is the youngster this year and he has stepped it up. Already in his second year, to be the group leader is a tough job. He does it well! I see him being more mature than you usually are at that age – it is a good thing to see.

Before we get onto the topic that everyone wants us to discuss, how about the triple header this week? Everyone was just happy to be in Latvia. Has this one been harder on you as a team, besides the obvious? With the demand on equipment and people, has this been harder than Latvia?

It wears, more on the riders than us. Latvia was different, like you said. After such a long break, everybody was just happy to be back. Now you can hear voices in the paddock saying, “It would have been better to have a double, like a Sunday and a Sunday.” You race Sunday and then after two days it is Wednesday again. It is tough – some boys take their toll and have crashes. We have seen a lot of crashes, to be honest. The speed is high. Everybody is motivated. It’s an old-school track with a lot of ruts, which is also different than usual. It wears off a bit. I think if they would make doubles, everybody would prefer it more.

What about being back at Faenza? We have not been here since 2012. I’m guessing that if fans were allowed, we wouldn’t have come here anyway. It’s all quite tight. The pits are basically on a really steep hill, so I imagine parking the truck and stuff is difficult. Would you make sacrifices there to have an old-school track like this?

The track is fantastic, to be honest. I think we have seen really good races that we have not seen in a while on Sunday, Wednesday and again today. It is so intense when they battle from first to tenth place and they are so close together, with no room for any mistakes and a couple of lines. Two or three line choices. That’s why they had such long battles. Normally if there is a single line track, they try for two or three laps and then somehow the train starts and everybody sits in it. If nobody makes a mistake then that’s how they finish. From that point of view, for sure I prefer it.

Jeffrey, of course. Faenza started so well for him. It sucks to say it now, but I looked at the first Faenza as the new Jeffrey. He went 1-1 on a day where maybe he was not the fastest or the strongest – he found a way to get it done. It just sucks that bad luck came into it on Wednesday, I guess. That is all it was. He was not pushing! He was not on a fast lap. It wasn’t like he was riding above his head. You just have to put it down to bad luck.

That shows you how close the light and the shadow are together. He was winning fair and square with the 1-1, riding smart and not doing stupid things. Then disaster struck on Wednesday and he ended up in the hospital, getting airlifted out. Worst-case scenario. Luckily for him, and us, it seemed like it looked bad in the beginning. He could not move his legs and stuff, and had tingly fingers. It all wore off after a short time, luckily. He has all  of his feeling back, but it’s a huge impact on the spine. It could take some time to recover. There will be further scans at the end of the month and we need to take it from there. At the moment it is too early to say anything, but I feel really sorry for him. He puts in such an effort. Disaster struck again. It’s not the first time we have seen this. I don’t know why. It’s hard to say.

I guess it is difficult as well, because it sucks that he is out. Like you said though, it could have been so much worse. It is good it’s not worse, but then it’s bad that he’s out. It’s a real mix of emotions, because you want to be happy it’s not worse.

Of course. If you see a rider airlifted to the next hospital or trauma center for back injuries and then a couple hours later you see him walking out of that thing, even braced up heavily, it’s a big relief. We know how fast he can go, and we have seen too many already sidelined and still struggling with injuries. Everybody was happy that he could just walk away. It’s a tough pill to swallow for everybody, of course.

How is he doing? From what he has posted on social media, he does seem thankful that he’s kind of okay. Has this been tough on him again? Is he in quite good spirits, all things considered?

He is in good spirits. He realises like he posted also, “I walked out of this.” When you are there on the ground and your body is not responding how you want it to, then I think you have a worst-case scenario going on in your head. Like I said, luckily he walked away and the future will tell if there is some impact on him or not. Hopefully not. He’s a great racer. He’s still very young. He’s 26 now. I hope he can come back and this will just make him stronger. I think he can win another championship for sure, because it already looked good this year.

This is a strange year anyway. 2021 is the focus now. If he has to sit on the couch until December, that’s the best thing to do. It seems like he’s gotten a bit smarter with that now anyway.

It makes no sense now to come back early and I don’t know, want to show up in Arco. I think that makes no real sense to me. Better you get really fit, feel it out, let your body heal and then prepare for the new season. This year is an awkward one anyhow, so maybe it is best to start for the next season. We need to continue like this now. It was weird anyhow. We had three races and we had three different winners, all on orange bikes, which is good for us. It still shows we are doing the right thing and we’ll keep doing that.