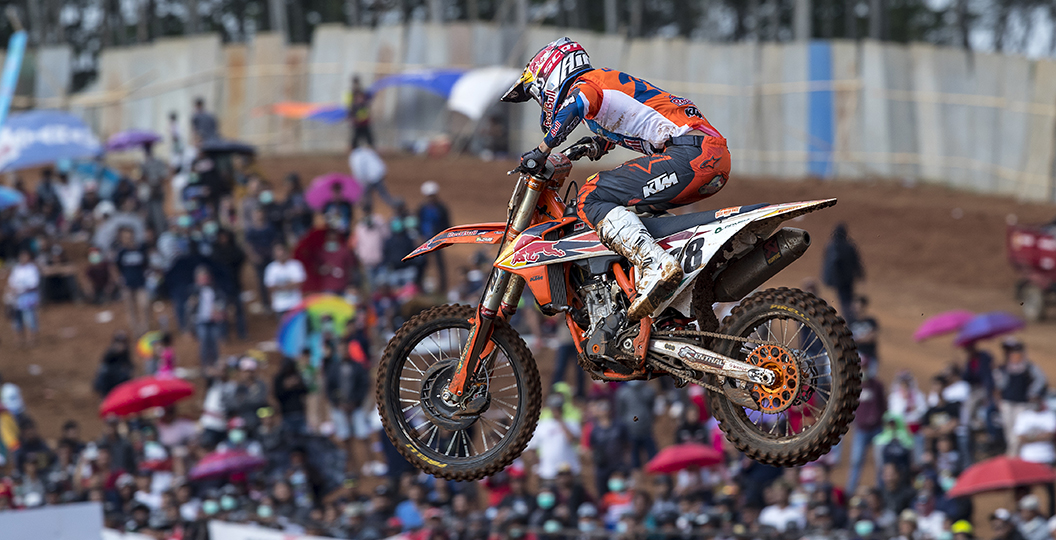 Red Bull KTM’s Dirk Gruebel always has a shot at success at each Grand Prix, as Jeffrey Herlings typically delivers silverware to the awning. Herlings has been absent this term, of course, but Tom Vialle has stepped up in his rookie season and filled that void by proving that he too can contend for victories in the MX2 class. Moments after Vialle had yet another incredible showing at the Grand Prix of Asia, Semarang, MX Vice editor Lewis Phillips pulled Gruebel to one side to learn more about his progress. The 2020 calendar is also covered, as well as the current status of Herlings.

MX Vice: One rider under your side of the awning, Tom Vialle, and yet again he delivers. Honestly, coming to these races, I thought he would struggle. Tom is a small guy and has never been to Indonesia before. It is hot here and he has never raced in these conditions. I thought it would break him. Instead, he has hit another level. Now I am ready to say he is the second-best rider in this class.

Dirk Gruebel: Yeah, to be honest, he surprised us again this weekend. Last week we got surprised. He has never been in overseas racing, like you said, especially in Indonesia in hot and humid conditions. You know how it goes with the food. Everything brings us problems once in a while, but he felt confident last week. He felt pretty good this week straightaway.

From the first time out on the track he felt good. Bike felt good. Like you said, he just delivered. Today was another little step and he showed again very consistent races. No mistakes. He had one slide out, but that was the track conditions. It is the third time in a row that he is second overall. That is pretty impressive.

I feel like even that crash in the first moto was a good thing in a way, because that showed that he is now pushing himself. He believes in himself enough to push himself to that point where he is maybe on the verge of making a little mistake or something, but that is good for the future as you have got to get those things out of the way.

Of course. He is learning. He has the fastest teammate in the class here and learns a lot from him. He follows him many times. I see him: He steals some good ideas, lines and tries other stuff. He also followed his competition, like Jago Geerts, and picked something from his lines. He just makes the best out of it. He does not get stressed. He had some attacks today, either with [Henry] Jacobi or with Jed Beaton, but at the end of the day he is the second guy on the podium.

When you see him pushing [Jorge] Prado, which he has done for the last two weeks, are you watching just like, “What the hell is going on? We got this guy and have created a monster!”

No. It is nice to see. He is not afraid of big names. If you look at it, they are both eighteen. They are pretty young. They look so comfortable out there and the racing is so good with them. It is unbelievable. At this age, riding on this level already… It is really nice to see. We keep working hard and making progress every week.

The first moto at Palembang was obviously the first time he has pushed Prado. When he comes in from a moto like that, is he just really excited and like, “I cannot believe what I’m doing?” Is he kind of all business and like, “Where was I losing time? Where was I slower?”

Actually, pretty much, yes. The whole family is pretty good. It is good to have him around. We all like the kid. He is easy-going. He created a good atmosphere. It’s good to have him. We don’t have Jeffrey here. It was a big hit in the gut. He just stood up to it. It’s fun again.

I’d like to say good job on extending his contract. I feel like if you didn’t do it, some of the other sharks would have started swimming over.

We saw that right away. You need to be quick. Like you said, everybody sees what we are seeing. It’s not the end of the story yet. We have him locked up for the next two years and that is a good thing. I look forward to that.

Before we move onto other things, what about the track this weekend? I feel like if we are going to come to Indonesia, which we obviously are, then we are going to be hard pushed to find a track better than this, especially with the layout. Okay, it is not perfect, but it could be a lot worse.

No, I think the layout is good. It is a natural motocross track. Even if it is man-made, they used the landscape. End of the day, every track is man-made at this point. It’s not like they just grow out in the countryside.

Exactly. It’s one of the best we have, I think, overseas. Everything else is really artificial on a flat field. This one uses the landscape. I think it is a pretty good track. We need to work a little bit on preparation still, because the soil is tricky. When it gets some water it turns into ice, let’s say, because also with the heat it dries out so quick. I think with ripping techniques and a bit of watering, the bumps also, I think we can get pretty good here.

Speaking of overseas, thoughts on the 2020 calendar? What was the first thing you thought of when you first had a scroll through it?

We have three [overseas races] in the summer in a row. I think it is a bit too much. First material-wise, you need to send more if you have three in a row. Second, you need to think about the people as well. We are a great team, don’t get me wrong, but now we stick two weeks together. Everybody is human. A little bit of friction arises here and there, of course, that is normal. We are not married to each other! It comes and I hear the same from other teams. I’m a fan, let’s say, if you go overseas then let’s do two races and back home. I still stick to that plan.

Look at it this way. We just finished up the second Indonesian round. Could you imagine if we were stood here talking and about to go to China?

No. That’s what I mean. Now everybody is happy. Two races in the books. Let’s go home.

Spain coming back. Switzerland is on the schedule again. I am looking forward to what they are going to build up in Finland. It is a whole motorsport complex. It’s going to be hard to build a track, but you never know. They have a lot of country up there. They have a lot of land they can use, but we will see. That is something we need to see.

Obviously, the big question mark is whether the first one is going to be in Australia or not. That would also be some extended travel. The first one in Australia and the second one in Argentina? It wears you out pretty much, if you have so many different time zones and so much flying straightaway in the first two [rounds]. We will see. It’s still early. It’s only July. We know from the past that it always changes around.

Moving onto our final topic, which is obviously Jeffrey [Herlings]. What’s the latest? Where is he at?

He started training. Just normal physical training. Not really walking yet, but he is kind of swimming and bicycling and stuff like this. He has a check-up soon and we take it from there. Then from there we take it further on and see where we are at.

I know originally some people threw Lommel around, but from what you said there I’m guessing that is a bit too soon. That’s three weeks away.

Yeah, I would say so. He is not walking. He is still on crutches. I would not rush things. The championship is gone. It makes no sense to come back unfit. I don’t see a reason. We need to wait for the check-up and then we will make plans from there.

We are maybe thinking Italy or Sweden at the end of August then? That gives him almost two months. That’s a nice amount of time.

That sounds better to me, for sure.

It’s insane to think you have got this guy, who is phenomenal. He is going to be starting his season just as you guys are finished up. He is going to come under the awning and be fresh as a daisy, whilst you are all going to be tired and ready to end it.