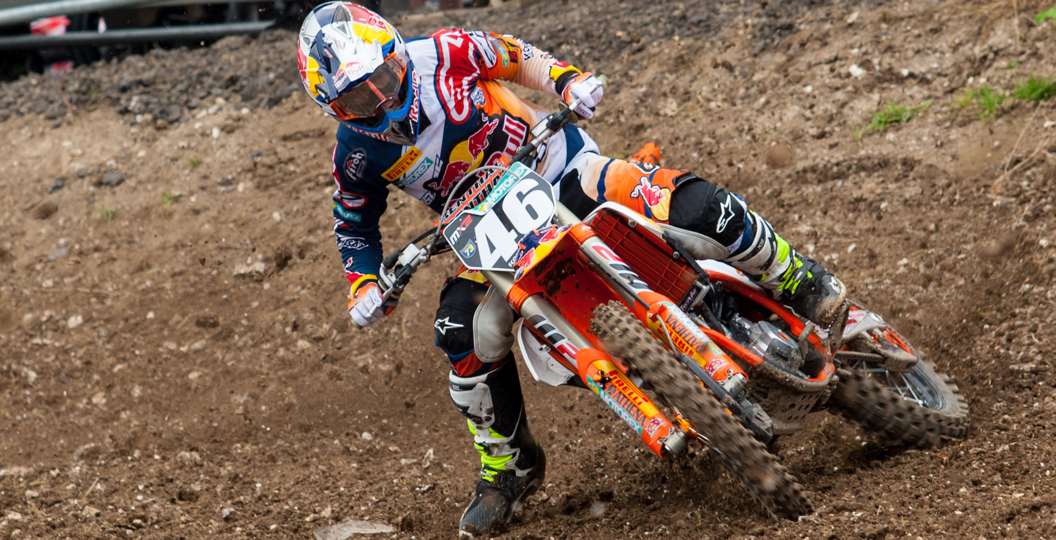 Once pegged as one of the brightest stars in the sport, Davy Pootjes is now attempting to build from rock bottom after being knocked back by countless injuries. Despite the testing situations that Pootjes has endured in a season that has worn on him both physically and mentally, he is entering the new season with a fresh outlook and hunger to fulfil his potential.

MX Vice: Obviously some news dropped yesterday that you seem pretty happy about. You have signed with HSF Logistics KTM for next year, but how did that deal come about?

Davy Pootjes: Yeah, you know, this year has been a tough season. The speed was okay, but I had many injuries in one year. Most of the crashes were not even my fault! It was a bit of an unlucky year and I had no results. I did not feel at home in this [Red Bull KTM] team, for sure it is a really good team and one of the best in the paddock, but HSF is a Dutch team and I really like the people. They are really professional; they have physical trainers, tests, a car and other things. It felt better to go to HSF. I have also signed until 2019 with KTM factory, but I will ride next season with HSF.

What was it that you made you unhappy with Red Bull KTM? Was there one thing that happened this year?

No, nothing really happened. Jeffrey [Herlings] is the first rider and, for sure, that is normal; he has won the championship. The team really tried to help me, but they were more interested in Jeffrey. That is normal though. The team did everything for me also this year and I think with the HSF team that will happen.

I believe you had a long-term deal with KTM even before this, right? You were meant to be on the factory team next year, so was it your decision to walk away or their move?

It came from both sides a bit, to be honest. I am still under contract now and for the next three years with the KTM factory, but I will ride just next season for HSF. I have the option at the end of next year to go for one more season with HSF or back to the factory. It was more from both sides, because since I have been in the factory team I have not rode that well. On the 125 I was riding so good and way better than on the 250F, so we said this would be better for me.

Are you still going to have a factory bike with HSF then or will you run the same bike as your teammates?

That has not been decided yet. We are going to test once I am back riding, then we will see. I think their bikes are really good and maybe better than the factory bikes. We will see.

Seeing as you have this big deal with KTM, I guess that if you are struggling you can go to the factory guys and they will help you out with either parts or advice?

For sure! I can always ask for things, advice or something. But, like I said, I think the HSF bikes are really good.

It’ll probably help you more just being in a Dutch team and being surrounded by people who have a similar background?

Yeah, I see the guys from HSF everyday because they do not live too far from my house. It feels more like home; I did not have that with the KTM factory team. At HSF me, Calvin [Vlaanderen] and Brian [Bogers] will be treated the same. They do the same amount of stuff for each guy, you know? At KTM I felt like they were doing more for Jeffrey, but that is normal and I understand that. I think this is better.

I saw you mentioned that you felt some of the KTM team turned their back on you, like your mechanic. What was that experience like?

That was kind of strange, as we did so much for him. He worked well as a mechanic, but it was because of us that he was there. He got a phone, driving license, a bus and so much from us. Since Assen I have not heard anything from him; he has not asked how my wrist is or anything. I was a bit pissed about that.

Did that make it harder to get over your injury? You had the pain in your wrist and everything, then that must have wore on you mentally as well?

Yeah, mentally it was quite a tough time. I knew the speed was good this year, but there were so many injuries. In Qatar there was a big stone on the face of the jump and I made a front flip, which broke my collarbone. I was back riding again, but in Latvia Zaragoza jumped on me and I broke my other collarbone. Now there is this with the inflammation; I did not crash or anything. It just comes with riding. I had surgery, then after eight weeks it was back again and I had to have another surgery. Mentally it was quite tough and then, on top of that, I saw the mechanic go away. It was a tough time. Now after signing with HSF I am positive, so I think next year is going to be a really good year. I just have to come back now.

Where are you at with the injuries? Obviously the inflammation has returned a few times, so once you have recovered from the latest surgery will you definitely be all clear?

They said it never should have come back after the first surgery, but after riding three times it was back already and even worse than before. The doctor said to me that he had never seen this before, so I needed another surgery. Now they almost opened up my whole arm, you know, so now it should never come back. You never know! I hope it is good now, it feels it, but we’ll just have to wait and see.

Do you feel any pressure to get back on a bike as soon as possible or are you just taking your time?

To be honest I am just taking my time. I would normally start riding in December, but this injury is quite dangerous. If it comes back again then it is quite dangerous for myself, as it may never go away. There is not much pressure to get on the bike as soon as possible. I will take my time and when the doctor says that I can start riding again, I will do it.

I guess moving to HSF takes away some of that pressure as well, as on a factory team all eyes are on you to achieve the same results as Jeffrey or Pauls [Jonass]. Do you think that will help you?

For sure, a lot of pressure is going away. Riding for a factory team also means that you need to be top five or on the podium. That was a lot of pressure on me, but HSF should be much better for me. Obviously they don’t want me riding around in thirtieth, but I know I can ride top five. It will be good.

It was only a couple of years ago that you were looked at as the next big thing and rider to take over from Jeffrey. Now, after these injuries, people have forgotten that. Has that been tough to deal with?

Yeah, you know, I was dominant on a 125 in 2014. I almost won everything until I dislocated my shoulder. Everyone was saying I was the new big thing and that put quite a bit of pressure on me. The beginning of the 2015 season was actually going quite good, but then before the first race of the European series I was riding at a track close to my house. I jumped and my bike split in two pieces, so that was a scary crash. Since then nothing has gone how it should and there has been more and more pressure. Now it is better; there is not much pressure on me.

It must have been tough to look at [Jorge] Prado on the podium at Assen? You must have looked at that and thought it should have been you. We have all seen that you are capable!

For sure! When I was saw that Prado was on the podium at Assen, it was quite painful. It was already painful just to watch there. For sure he is a really good rider and big talent, but I was beating him in every race we did together this season. After my second collarbone injury my riding was actually going really good and in the Dutch Championship I was battling with Jonass and Max [Anstie] in all motos. The speed was good! If I was fit for the GP in Lommel, I’m sure that I could have even won there or got on the podium. It did not happen with the wrist injury, so it was extra painful to see Prado on the podium at Assen.

Next year, where do you think you could be? I guess you’ll be shooting to win races, based on what you just said.

I really think I can win races and battle for the championship. I am going to work really hard and then we’ll see what will happen.

If next year does go really well, would you be more inclined to stay with HSF? It’ll prove that it is a set-up that suits you.

If everything goes well and the results are really good, then there is a big chance that I stay with HSF for 2018. We will see, we first need to race before we know, but I also want to thank Red Bull KTM and my sponsors for their support over the last couple of years.