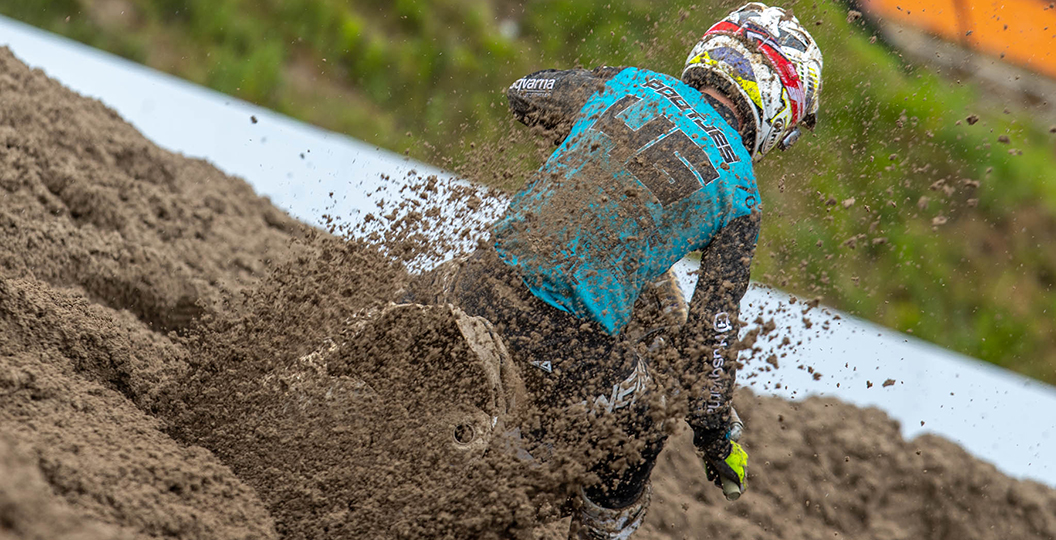 When Davy Pootjes first arrived on the MX2 scene in 2015, it was presumed that he would find his way onto the podium sooner rather than later. Injuries and additional issues made it extremely difficult for him at points, unfortunately, but he is now rebuilding himself with the Diga Procross Husqvarna outfit. A maiden podium finish at the Grand Prix of Lombardia was a good indication of the progress that he has made since the start of the season. Lewis Phillips caught up with him to discuss that.

MX Vice: First podium, two solid motos and everything was great. I am not that surprised though, because the last few weeks, and all year, there have been these little flashes of brilliance and you could just see that this was coming.

Davy Pootjes: This should have happened already three or four years ago, to be honest, but it did not come. I had many crashes, injuries and some bad luck. It was a tough time. Last winter and last year we made a good plan together with Diga Procross. We worked really hard over the winter. I am really happy it is paying off.

Last Thursday my girlfriend sent some pictures of the track to me and then I said to her, “It is my time this weekend to be on the podium.” I said, “I am closing the gap to the others.” That is quite funny it happened. I am really happy and looking forward to fighting in front.

I am guessing the second the rain started falling your confidence grew again. We know you are a mud guy. You could have quite easily been on the podium or won in Indonesia in 2017. These are your conditions.

For sure. Always good in the mud, as a Dutch guy. But, to be honest, like what you said, this year already in the GPs when it was dry, hard-pack or sand… I have been there close to the top five almost every weekend. I showed also on a dry track that I can be there. Yesterday in qualifying I set the second fastest lap time from everyone. I was feeling good on this track.

My self-confidence is getting bigger and bigger again after all the crashes and injuries, so that is the most important thing. The last three years I did not have any fun, because I was always out and lying on the couch because I could not do anything. Now I am having fun every week. Go training every day. It is just a good time and I am really happy. I want to keep going like this.

Whenever someone gets their first podium, they are excited and pumped up. For you though, is it just relief? You have been expecting this for three or four years, like you said, so to finally get it done, is it just like a massive weight has been lifted off your shoulders?

Yeah. It is like I have been working three or four years with a big bag on my shoulders. It has been days. In 2017 when I was injured with my shoulder, like a big injury, I was on the couch seriously for one month. I was like crying. I did not talk at all one-month long. I wanted to stop with motocross. Now, I believe I need to be there. I believe I can be there. I need to be there. I work hard for this like all the others. For me, it is like a big bag off my shoulders to be here.

You know that you have got the speed to do this in all conditions. I know you have got the speed to do that. To get to that point consistently, is it just starts? Yesterday you were running the fastest lap times and fastest sector times, but because you started around ninth you obviously could not battle up the front or in the top three. I guess starts, that is what’s going to take you to that next level consistently?

What do you think the next step is for you? You have got the podium now. Is the next thing to check off the list leading some laps? I guess that is the next logical step.

Yeah, for sure. You need to keep improving. My goal every weekend now is to be on the podium. For sure that has been the goal already from race one this season, because that is what I work for. Then the next step will be to hopefully lead laps and try to win. That is for sure the next step. I will do my best for that.

You are getting these good results each week and obviously have a podium now, are Husqvarna starting to take more notice of what you are doing with this small team and chucking some more support your way? Are you noticing a difference in that respect?

No. To be honest, I have been the second Husky rider every GP. We are opening people’s eyes, I think. It is only getting better and better. I am not done yet. I am really motivated to keep going like this.