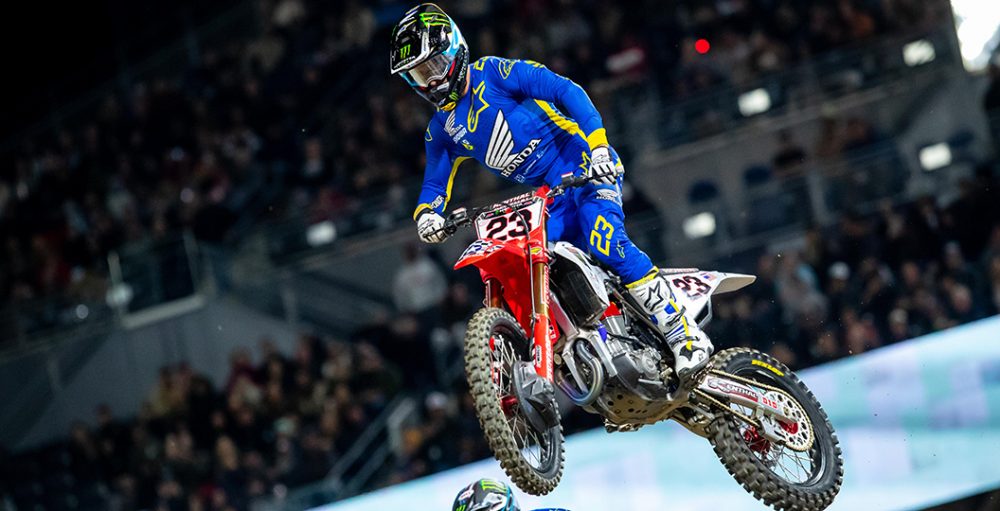 Chase Sexton notched up his first 450SX win in San Diego, California, on Saturday evening, not that it was much of a surprise. Sexton has been due for quite a while, so a victory in Petco Park was more of a relief than anything else. That was discussed at length in the post-race press conference from round three of 2022 Monster Energy Supercross, as well as the various changes that were made this week in the hunt for more (yes, more) rigidity. It was an intriguing week for the Honda HRC squad.

Chase Sexton: I would say that it was more early on, like when I got into the lead. I was like, “I am not wasting another opportunity.” I think I was pretty locked in. I felt really good with the track. For me, I was comfortable in the whoops tonight and that was the biggest thing. I could hit those with confidence every lap and did not have to worry about stepping out. I just really hit my marks and it felt like I was back at the Honda track. It is hard to put it into words. It feels like I have been chasing this forever, but it has only been a year and a half or so. I have had lots of opportunities and tonight was the night. It was a pretty dream come true ride for me.

Did you have an opportunity to see where everyone else was during the race and have a check on anyone?

Yeah. I mean, I knew where [Eli] Tomac was. I knew where… Jason [Anderson] was in second at one point and I saw him, then I saw Eli. I was just trying to hit my marks every lap and keep myself at a good distance where I felt like I was comfortable. I was looking at the pit board and at the lap times, riding like it was a practice moto. It was enjoyable. It is addicting, so I want to do it again.

Champions always learn from their mistakes and their weaknesses. Talk about the training that you did this off-season to maybe offset some of your weaknesses from last year.

For me, I think that it was just learning the bike and what I can get away with on the 450F. Obviously, I hit the ground a lot last year. It came back to haunt me a lot. I was not very confident and when you are not confident then you seem to hit the ground more. Obviously, I crashed at Anaheim 1. Last weekend was the first race where I did not crash. I stalled, but I did not make the mistakes that I have made prior. Last week was not a good result, but I was… I was not excited, but I was happy that I got through it without making those dumb mistakes. I just felt really good this weekend. I felt really good in practice.

I was not the fastest, but I felt like I had really good race craft and like I was squirting out of the corners well. I was staying low on stuff and ultimately that is what it comes down to, just feeling comfortable. I had a horrible start in the practice start and then a horrible heat-race start. I told myself that I had to get out front in the main, because the track was more difficult to pass on than normal. I just needed to get the good start. I would not say that I changed a whole bunch with my training. I did spend a lot of time in Santa Barbara, which matured me. Overall, I just feel a lot more mature this year than last year. I am going to keep getting that way, because I am still only twenty-two. I just want to keep improving and get better.

Way to remind Eli that you are only twenty-two!

Hey, Eli did win a lot of races when he was young too. Do not let him kid you!

You mentioned in your podium interview that you have spent a lot of time testing the bike this week. What in particular were you testing? That is the first win out of the way, does it feel like relief and did you feel like you needed to get that out of the way in order to focus on the championship?

Yeah, so this week we left the Honda track and rented Lake Elsinore. They have a pretty good set of whoops and we were struggling there pretty good last week, me and Kenny [Roczen] both. I was there until around 16:00, so we spent two good days of testing. I feel like it paid off tonight. I felt more confident from the first practice on. We did make a few changes, but it was really just for the whoops. I felt really good everywhere else, but when you do not feel comfortable on a certain part of the track and you have to go around that for however many laps then it is difficult to do.

I think that it definitely feels like a weight has been lifted off my shoulders. Like I have said so many times, I was in that position a lot and it never happened. You start to question, but tonight I had to believe. I finally got it done. It is crazy. The 450SX class is gnarly this year, like it always is, and there is still a lot of racing left. If I can keep getting good starts and putting myself in a good position then I think that we will be where we want to be.

What goes into the finish line celebration? Is that like a month of thinking in advance? How long have you been dreaming of that moment? How do you make that decision?

I did not want to throw a whip or anything, because the last thing that I want to do is crash when I win the race. I don’t want to slide out on the face or anything. I just keep it pretty simple. The ghost ride… I have thought about that a little bit. I have done that before. I just think that, because it was my first win, there was a lot of emotion and it just kind of came out of me.

Now that you have achieved that first win, you have some momentum rolling into familiar territory in Anaheim. How much will it mean to you to be able to back this up with good performances down the road?

Definitely. It is a big thing to win races and I have not… It has been a while since I have won a supercross race. It has been since I was on a 250F. I do not want to be a one-hit wonder. I want to go out there and back it up. Like I said, if I can keep getting good starts in the main event then it makes your life a lot easier. I have not been doing a whole bunch of start practice, but I have been doing other stuff with the bike and trying to fix stuff on the track. Getting good starts and putting myself where I need to be is key. I think that I can keep getting good results if we can do that.

This week we switched triple clamps and we changed some stuff to make it a little more rigid. I felt like we were getting a lot of flex with the bike, so we changed a lot of stuff this week. It was nice to see it pay off – we threw a lot of stuff at it. I was there for a while testing this week. I am not saying that it is perfect or that it is going to work everywhere. It definitely made life a lot easier in the whoops tonight.

You have led races late in the 450SX class, like Atlanta last year. You had a bigger lead tonight and were trying to manage it from the front. How much longer did this race feel, trying to keep that pace up towards the end?

It definitely felt long. It is one thing when you are feeling comfortable and there are races, like Atlanta last year where I actually had Eli behind me, where I was not very consistent in the whoops. I was just hoping and praying every lap that I was going to get through them without crashing. I felt like I was riding well tonight and I felt good on the bike, so it was much easier for me to keep the gap where I needed it mentally. I felt comfortable. It was a long race – I do not know how many laps we did – but it was one of our shorter tracks. 450SX mains are long in general, but tonight definitely felt a little longer.