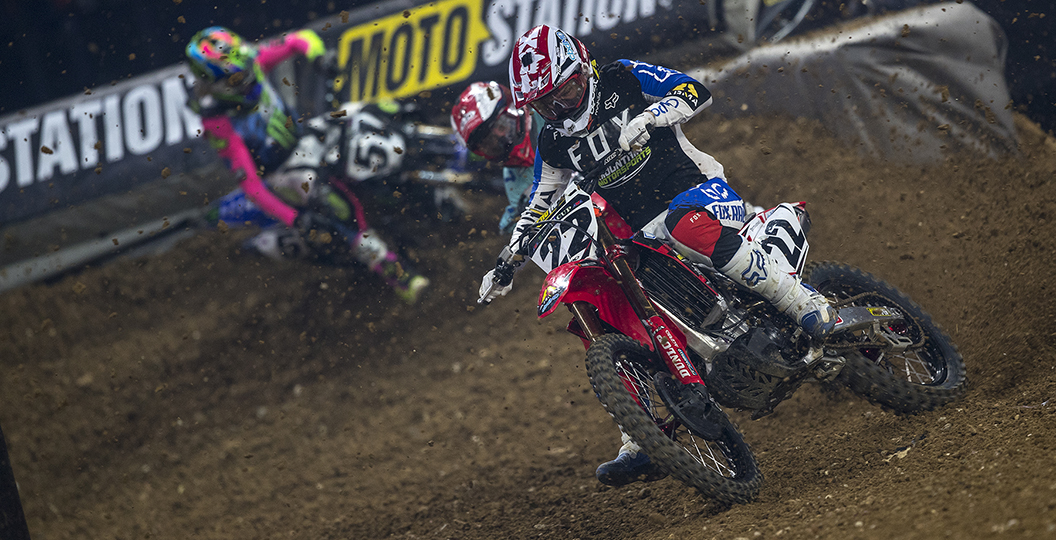 Chad Reed was unsurprisingly a fan favourite in Paris over the weekend. Although the event did not quite end in the way that he would have hoped, there were still positives to take from the countless laps that were clocked over the weekend. What did Reed have to say about his return to France and what the future holds? Those topics are covered at length in this exclusive MX Vice interview.

MX Vice: I don’t know how you look at the weekend, because you are still running the privateer programme and still easing back into this thing. It’s tough to have expectations, but there were positive points with your riding. Ultimately you crashed out though and that’s a bummer way to end things.

Chad Reed: I think there are a lot of positives to take from it. I think you have to look at the facts and the facts are when they drop the gates, everybody is going for the same thing and preparation will always win. I’ve had less than perfect preparation. With knowing that, I really think that the pace at times – my intensity – was generally better than what it was at Monster Cup. The results on paper are not ideal.

With intensity, once you up the intensity then that’s when you really need to rely on your bike fitness. You are basically at your one hundred percent and you are go, go, go. Yesterday I found out that out. Okay. I went faster and harder, but then my arms blew up. I never, ever… I actually can honestly say I have never had arm pump in a race before, and I full on had arm pump in the second and third races yesterday.

That is just when things are happening faster than they have in a while. For me, I take a positive out of that. The feeling that I need is generally there. It’s kind of like throughout the lap, I’m like, “Oh, yeah. I remember that feeling.” Maybe I’m not putting it together lap after lap or corner after corner, but the feeling is coming back. I am generally happy with the weekend.

Everyone always says Chad Reed is not good at the one-lap thing, but in the Superpole both nights you held your own. Whilst watching your lap I was honestly like, “No one’s beating that. There’s no way.” There is that improvement you were talking about.

Yeah. Mookie put a crazy lap together. I think that was the lap that I think was most impressive. Again, echoing what you said, I am not a one-lap guy. I struggled bad with it when I came here in 2001. Here we are in 2019 and I struggled with the same thing. I just don’t have that driving desire to lay my balls on the line.

Especially not in Paris on a random weekend in November.

On a random weekend in November. I cannot use that as an excuse, because that happens seventeen races a year too – where you go for the lap because you have to, and you try to extract the most out of it. I’m always better when they drop the gates, so that’s kind of funny.

It has obviously been a while since you have been here. Different stadium now, different dirt and all of that stuff. Is it still the same Bercy/Paris that you remember? Same format, pretty much. Was it almost like slipping on an old pair of shoes?

A little bit. The loudness, the crowd and that general French feeling at a supercross. Bercy is, in my opinion, a lot like the Sydney supercross. It’s a very unique stadium that has an atmosphere that is really, really hard to beat. The crowd is literally on top of you. We go out of the stadium and we come back in. I think that the crowd lacked the Bercy atmosphere a little bit. With the world we live in now, there are no chainsaws allowed in the stadium and all those kinds of things.

The same thing is going to happen in Australia, I think. I think that with this Australian race that we have we are going to a much bigger venue and a much bigger floor. It’s going to be freaking awesome and it’s going to smash all other numbers ever viewed at a supercross. I think it’s going to be challenging to get that atmosphere that we had in Sydney. That would be what I would say – these two events are going to be really similar like that. Not that it lacked atmosphere, just that closeness of the crowd just being right on top of you. You feel like a fish in a fishbowl.

You just kind of have to take it for what it is. It’s a lot of time. I remember once upon a time we used to get paid a bunch of money to come and do twenty laps. This weekend the third main event alone was more than that. It’s the time. Everything is changing. With where I’m at, I need those laps. Does it go downhill a little bit and does it feel like… I don’t know that I would say it feels repetitive, but it feels exhausting. I need that though. As much as it sucks, I need that feeling.

Can we talk about 2020 a little bit? Is there anything to say at all?

There’s not a lot to really talk about. All I can say is that we are working really hard on it. My friends at Mountain Motorsports are excited about the potential of going racing, so they are working on it. I think that it’s a 50/50 shot. I think that there’s a solid chance that you’ll see me in 2020 racing the whole season, and unfortunately there’s a solid chance that I may not be there. I hope that option one is the case.

Is there a chance that you dip in, get 250 starts and do the races that are easy or favourites of yours? Is it all-in or nothing?

You never have that dream or that goal of a particular number as a little kid. Now as a 37-year-old who probably has a pretty good understanding of what a career means, I feel like I’ve gone through the ups and the downs. I’m now on the point where it’s kind of like you have perspective. You have appreciation. I think that 250 is a big number. It’s going to be a number that is really hard to beat.

I don’t see anyone currently able to challenge that. [Justin] Brayton is 100 short and he is a year or two younger than me. I think time is against him to be able to challenge that number. I think when you hang your hat up, 250 is a badass number. If it’s 250 – or if it’s whatever 17 more is – it’ll be important. I would say that if for one reason I don’t get to go racing in 2020, I will do 250. That may then be the new record.

You are obviously trying to put together a privateer program. Is it tougher now than it was when you were doing the Husky thing two years ago?

It’s not harder, I am just in a different point where I love it and I really, really want to go racing. I also love car racing though, and if I’m going to spend money at this point in my life then I would go spend it in car racing. I still truly believe that I sell more motorcycles than anybody else in the industry. I sell more clothing than anybody in the industry. Why make it crazy hard? If they don’t want me, they don’t want me.

Now that you have done the Husky thing, you kind of know what you are getting yourself into too. You cannot go in and be too optimistic. You know just how tough it’s going to be, the bad points and everything. I guess you almost don’t want to put yourself in that vulnerable position again, knowing all of that?

Yeah. I look at it more on a positive note. If next year is my final season, it excites me to go and do it alone. No boss. Not a lot of rules. Really go and enjoy it. Build a motorcycle. That motorcycle that I raced tonight, that bike is 100% good enough to go and win 17 races. It’s that good. Do I have things that I don’t have that the factory teams have? Absolutely. That bike is well and truly capable of winning though.

It just takes me to be prepared, twist the throttle and make that happen. I don’t feel like I’m losing or missing out on anything. I think that in general it will be really exciting to go and do it with a group of people who I really trust and love to be around. That’s the way I look at it. I view it as kind of like a bit of a blessing in disguise, I think. I had a completely different plan two months ago.

Actually, to be honest with you, three months ago I had this big plan, these off-season races that we were doing and a bunch of testing at the end of the season. Suddenly one thing led to another and then that wasn’t happening. It was a shame in a lot of ways, but I think at the end of the day what will come from next year will be something to hang my hat on and be real proud of.

Finally, just how confused were you by what was going on in opening ceremonies? I watched it twice and I still just don’t have any grasp on it at all.

I’m glad you don’t, and you are at least on this side of the pond. The best thing was when they were telling us about their concept and their idea – it was all based on a French Netflix thing. They were like looking at us and were like, “Can you play it up?” I was like, “Guys. Literally nobody in this room… None of us have any idea what you are talking about. What is there to play up, because we don’t know!” He was like, “It’s this, this and this.” I was like, “Still not getting it.” We were obviously out back, so I still have not seen the full concept come together.

It was pretty funny. It was funny as the American group. They threw me to the wolves, to be honest with you. All those kids just got to go and chill. I had to be like the professor and I had all these lines. Nobody had given me any heads up. We had to be there at 7:30 to do an opening ceremonies thing, that was mandatory. That was the only information I had. I showed up and the guy had all these lines and basically hands me a script. I was like, “This was not in the negotiation of my contract.” It was pretty funny. I hope that it came out well, because I was shooting from the hip.

It probably came out well for them. For me, not so much.

I still don’t understand it. It seems like they all yelled and cheered. Maybe it was because [Dylan] Ferrandis came into the stadium, but I’m going to take it that they got it.