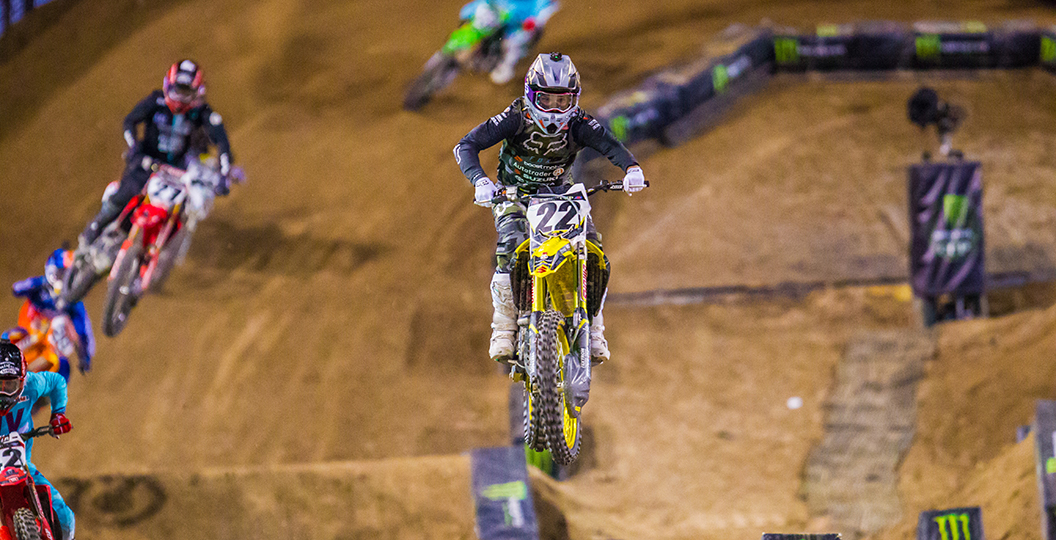 Chad Reed was one of the most intriguing riders to follow at the recent Monster Energy Cup, not like that was a surprise, as he made his indoor debut with the Autotrader Yoshimura Suzuki Factory Racing squad. The event was certainly turbulent for him, hence why the results were not quite as impressive on paper, but there were countless positives to extract from proceedings. All of those are tackled in this exclusive MX Vice interview.

MX Vice: Speed was good, first of all. Results, obviously you would like them to be a bit better, but things were kind of out of your hands. There were positives to take from this.

Chad Reed: Yeah, definitely. First one was like that normal first race back shock to the system. Struggled a little bit. Then the second one I got another great start. I think I was in second there and obviously got the rear brake stuck on. The last one was like the icing on the cake for me. I already had a good day. We progressed a lot. I was having fun. Then the last one, I felt like I actually went out there and rode well and got a solid third. It was a good end to the weekend.

The rear brake thing, was that just a rock? Did someone hit you? How did that come about?

No, I jumped a little long and I landed in the mud. There was some mud in there. It just jammed right up in-between the engine, the rear brake and whatever and just got stuck on. Then obviously, because I came to a major halt, everyone rammed into me and had nowhere to go, so unfortunately it was my fault. To be running up there and then to be able to come back and get another good start in the last one and then actually finish on the podium was awesome.

Like we said, the speed was good. There were a lot of positives to take from today, but the one thing that sticks out in my mind is you are finally getting good starts again. I think the last time you were consistently getting good starts was back at San Diego and Anaheim 2 in 2016. That has been holding you back since then.

Yeah. I would say that in supercross and the way that the current generation rides, it so much is depending on the start. You have got to be in it to win it, I always say. You have got to be in good positions. This is my fifth race on the bike, fifth moto race. Two at the national, and I got pretty much two holeshots there, and then holeshotted one tonight and pretty much second in the other two. All things leaning towards the bike is really, really strong on the start. I have confidence. Starting is… Sometimes it is not about technique as much as it is just having that confidence that you know you are going to be able to get a good start.

This was kind of like your first tryout on the bike in supercross. Were there any shocks to the system set-up wise? Anything you learned that you maybe didn’t expect?

No. The things I felt we needed to work on were very, very clear here. We immediately went to work on that and we made amazing progress. I think that from the day to the night, we saw a big improvement for us as a team. This bike gets boxed up Monday and goes to Australia. I feel really good about the bike that we are putting in a box and sending to Aus. Now it is about continuing what I learned today from my intensity and my riding, plus seeing where Eli [Tomac] was really strong and where Joey [Savatgy] was good. Then just taking that and implementing it into riding and coming out in November and seeing if I made that jump.

This has all been super positive. Is there anything today that has worried you or given you something to think about? Is it just been one of those days where everything’s kind of gone right?

Yeah. My concerns coming in were for the most point validated during practice. Then as the night went on, I felt like we got better. I got more comfortable. My intensity got better, so overall I just think it was a really, really positive day and night. I can’t ask for anything more, to be honest. When you get good starts like that and you run out front and you actually see the guys, it’s nice.

Finally, are things heading in the right direction away from the track now, as far as whether you will be on this bike at Anaheim 1 or not? Even if nothing’s locked in, is it kind of starting to look good?

It’s unfortunately not locked in and it’s just at a point where it’s a dollar and cents thing. Team is working really hard. I have all confidence in them and believe them that they are working hard. I see it. I’ve been in North Carolina the last kind of month and I see the work that they are doing and the behind-the-scenes stuff. Truthfully, I’m making a lot of phone calls to old TwoTwo Motorsports sponsors and things like that too. A bit of luck and some continued hard work… I really think that we can make this work. I’d be really, really kind of excited to make it work.