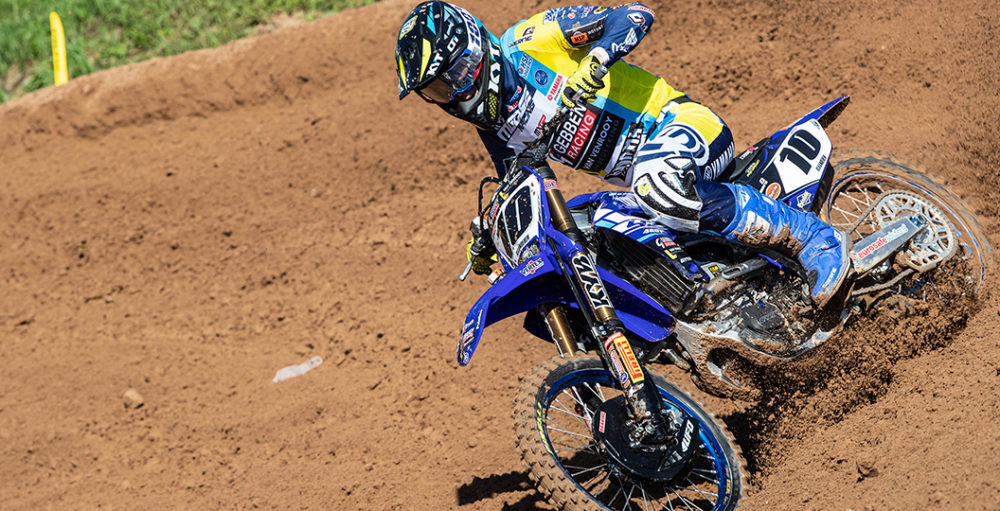 Calvin Vlaanderen was undoubtedly the most pleasant surprise at the third round of the 2020 FIM Motocross World Championship. Was it really a surprise though? It was quite obvious that Vlaanderen would figure things out with the Gebben Van Venrooy Yamaha team eventually, so where does he go from here? The raw speed that he possesses is clearly good enough to put him in the top five. MX Vice editor Lewis Phillips caught up with #10 for a socially distanced chat on Sunday evening, where his rapid improvement was discussed.

MX Vice: I wouldn’t say there was pressure on you coming into this, but there was definitely kind of a point to prove after the first two rounds. You proved it. The second moto was screwed by a bad start, but you came through. The first moto was sick. Speed was good. Qualifying was good. This is all proper exciting for the future, I think.

Calvin Vlaanderen: Yeah, definitely. I’m a little bit disappointed, to be honest. Eleventh overall, but I’m disappointed. It’s strange. I feel like qualifying was good. I set a good time in the beginning, which was my tactic… Just go out on the first lap and get a good lap, which I did. In the first moto I had a pretty good start. I was behind [Gautier] Paulin. I don’t know why, but he was kind of riding like easy the first few laps. I was attacking him, like I really wanted to pass him. That just ruined me. I wasted too much energy. I hit such a wall after ten minutes. I just tried to ride around and I managed to finish eleventh, which I wasn’t happy about like I said.

Then in the second moto unfortunately I had the start crash, but to come back to twelfth is not too bad. I think this step that I’ve made in corona time is big. I think a lot of people can see that. The gap to the front for me now is very small. Before I was looking at it as such a big jump. I needed to work a lot harder, which I have done. I feel like I’ve managed to make that gap a little bit smaller. I think there is definitely more to come. I didn’t feel great all day today. Physically I struggled. I think it was the heat and maybe the stress a little bit. It’s positive. I’m happy.

It’s funny you say that about [Gautier] Paulin, because I even tweeted in the first race that he was clearly holding you up. I don’t know if you remember this, but you scrubbed the sh*t out of that little single before the finish. I was like, “Oh my god. He really is desperate to get by him.” I guess that did screw you up.

Exactly. I wasted way too much energy trying to pass him, but that’s experience. I think anyway. I think he knew it was going to be a long moto and take it easy. I feel like if I got past him I could have got into my own rhythm and followed Jeffrey [Herlings]. That’s going to be the races to come. I’m really looking forward to Wednesday, to be honest. I really enjoyed the racing today. It was fun. I enjoyed my bike. What more could you ask for?

You weren’t happy with it. I think that everyone watching, even people at home, could see that the step up is clear. It’s not even about results at this point, is it? It’s all about potential and proving that you can do it on the 450F. That would do a lot for you moving forward. I’m guessing coming into today there must have been a bit of you that was like, “I think I’m ready, but let’s see where it puts me.”

Exactly. It’s just getting experience in the 450 class. To be honest, in England I had an okay qualifying time. I don’t know how. I lined up against [Gautier] Paulin and [Clement] Desalle and I didn’t believe in myself to get a better start than them. Today the guys next to me on the start… I didn’t care who it was. I was like, “I’m going to get a better start than you guys.” That’s just such a mental thing. The confidence is coming back. I feel it. It’s such a nice feeling.

Obviously, it’s hot today. We are going again on Wednesday. Any concern about that at all or will the two days be enough rest?

I want to go tomorrow already. I really am excited to go race. I enjoyed today. I enjoyed the racing. The racing was fun. The bike was good. I think I’ll recover nicely the next two days and go again on Wednesday.

That is a big switch. It was definitely a big switch. I don’t want to spend too much time talking about it, but I do feel a lot better with the KYB suspension. I just trust the bike more and have confidence in the bike. Very stable. You just trust the bike. That’s the biggest thing on this level. A few little tweaks here and there can make such a big difference. Definitely, that’s one big point. Another big point is working with Herjan Brakke. I think it was just before corona started that I made an agreement to work with him.

It’s been really good the last few months working with him and two European 250 guys. To be honest, [Thibault] Benistant is sometimes faster than me at training so he’s pushing me a lot. That’s good for me. I need that. It’s been good. I needed someone to help me – just another set of eyes on the track. Sometimes I’m riding and I feel like I’m going fast, but I’m actually not. He has definitely helped me a lot. I’ve got to give a big credit to him and what he’s done for me. Definitely going forward, he’s going to help me a lot more.

You say you are not happy with eleventh overall, but moving forward what would make you happy? Is a top ten even going to do it for you or do you now have that much drive and belief that the sky is the limit?

I think it’s step by step. I’m focused on today and eleventh overall is not bad on paper but, like I said, I’m not happy. I think Wednesday… If I can do two motos in top ten then I’ll be happy. The goal was always to be creeping into the top five at the end of the season, fighting with the factory guys. That was always the goal. I think we are on track for that. We take it step-by-step, each race at a time and get experience. I think if I can take good starts you guys will see me fighting up front.

This track has claimed a lot of riders over the years. A lot of people call it sketchy and obviously it’s quite deceiving with the hard base. How do you see that going over the next two rounds? Do you think it’s going to stay as it was today? Is that base only going to get harder and therefore sketchier?

To be honest I think it will get softer, just because of more riding. The problem was they didn’t put enough water on yesterday. They didn’t prepare the track last night, so they left it all rough. The base was still hard underneath. That was the biggest problem. I think when they made it flat during the motos and those places got soft. Those were pretty good soft. I think it will be a little bit softer, but the track was sketchy today. Really sketchy. They didn’t make it flat at all. What can I say?