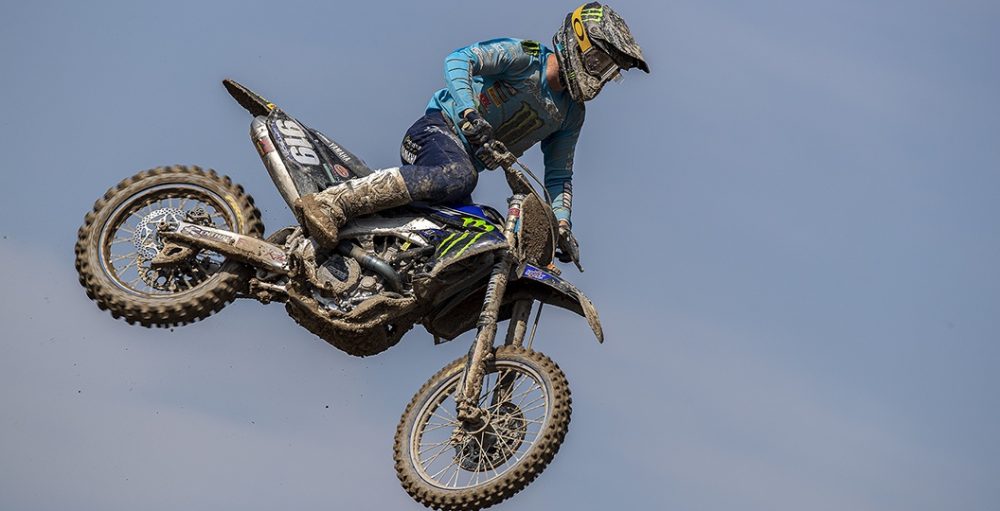 Ben Watson’s undoubtedly been one of the strongest riders since the Grand Prix contingent arrived at Mantova, as he has shown incredible speed in each moto and that he could become a moto winner in the very near future. The Grand Prix of Citta di Mantova was proof, even if the final results did not quite work out as expected. Watson discusses that in this exclusive MX Vice interview, which was first posted as a post-race podcast, as well as what is going on with his plans for next year.

MX Vice: Obviously not a great day results-wise, but I don’t know. Maybe you rode better than Sunday? I feel like you rode really, really well. Results didn’t pan out how maybe they could have, but a really good day.

Ben Watson: Yeah. It was a good day. On paper it did not look that great. The first race was pretty good. The problem is that my qualifying is what I’ve been struggling with. This morning I did not do anything crazy. I just did a real smooth lap, and it was good for me. I was seventh and I’ve pretty much been outside the top ten all of this year in qualifying. The one lap time is not my thing. This morning I felt pretty good. I was feeling quite free, loose and just having good fun. In the first race I came around and did not have a good start, to be honest. It was a bit mediocre. I was kind of there, but I had six or seven guys in front of me.

I had quite a good first lap. I passed a couple of guys and I think it was… I actually don’t know, maybe seventh or something like that on the first lap. I just had a bit of a lag. The first two, three or four laps were just not really anything special. I kind of stayed in my place. I got passed by [Thomas] Olsen and I think I passed one guy. I was not really that great in the start. I was not sharp enough. After maybe the first ten minutes I started to get into it. I just found my own rhythm. I was stuck behind [Mikkel] Haarup for a little bit too long in the beginning. Once I got past him, and got going, I felt good. Then in the end, I came through. I was just riding my own race. A few guys made mistakes in front of me and I passed a couple of guys, like [Roan] van de Moosdijk. I just rode my own race and in the end I was like four seconds from the lead. It was real strange. I finished fourth and it was definitely a positive race.

Then in the second one, I had a bit of a panic before the race. I had some issues with the bike and I swapped to the second bike, then I came back after the sighting lap and the guys had sorted it. I went back to my race bike. I went down to the start straight and had a first-turn crash. It just was a bit messy in the beginning. I came through  and was fighting with the guys at the back. Honestly, it’s so sketchy. I cannot explain how sketchy it is. Guys are just jumping from left to right. I was on some dodgy lines, just trying to get around people, and made a stupid mistake. I washed out again. I picked the bike up and looked down to the left of me – there was not one rider. I was last. Like three laps into the race, I was completely last.

I was gutted, but what can you do? I got back on and just tried to be a little more smart. I could have been a little bit more erratic, just smashing people out of the way and scrubbing next to people. I had it one time where I honestly almost died with [Cyril] Genot. He just jumped straight… He got sketchy before the jump and just went from right to left, and skimmed my front end in the middle of the air on a massive double. I was like, “Woah.” I just tamed it down a little bit and tried to be smarter. I was riding fine. When I had no one in front of me I could get in my own pace and ride how I wanted to ride, but I was fighting with a lot of guys the whole moto. I came back to thirteenth I think. The result was no good, but I’m in one piece.

I think maybe your biggest problem with today is that every single MX2 rider latched onto your inside idea at the start. That has kind of been the talk since Sunday. I’ve had like five riders ask me about it.

I was thirteenth in qualifying and then there was two or three spaces open on the inside. I was just taking what was available, but it was always quite close up the inside. At that point I had two really good starts, including a holeshot. When you have two really good and consistent starts, people want to see where you are going from. That’s normal. I guess that’s kind of the positive and the negative of having these three in one go. You can learn from yourself, but if you are the one who is good in the beginning… If it was like a normal GP, that would be positive for you. Now we have three, so the guys can kind of see where they need to learn. It is what it is.

It’s not like towards the end of that first moto you found a new line that no one else was using and that was where your speed came from. It’s just always in you, and you just uncork it. You were going to the front. Had there been another five laps, I reckon, things would have got interesting.

I definitely had another five laps in me as well, because the beginning of the race I was not doing anything really crazy. It was quite easy physically. The track here, you are flying through the air quite a lot of the time. There is always space to breathe and kind of shake everything out. With a few laps to go, Vialle was just there. I came within two laps and I was on the back. The problem is it’s really difficult to pass here. I got there and on the last lap I was trying to create opportunities to get by him and I don’t know if he thought I was Jago, because the Yamaha is really… You know when there’s a Yamaha behind you.

I think he was scared that someone was going to try to slam him or something, because on the entrance of the corners he was getting real tight and trying to brake late. He was making really a lot of mistakes. I was just on the outside going in and flowing. I was waiting for him to make a mistake. I really was. Here it is difficult to really snatch the opportunity to go. I was still fourth and right there behind everybody in first, so it was positive.

Are you looking at points at all? You are kind of coming up from behind after the up-and-down start to the season, but you are in that battle for third. I think it’s just from third down to you in seventh. Are you looking at that at all or it is what it is?

No. I’m not looking at the championship at all. I would not know what the points are. Even if I was up there, of course the team would be saying you need to keep an eye on things and make sure you are consistent. I want to get good results. If I’m riding good, that part will come. There are a couple of times it’s been out of my hands where I’ve had no points, so the championship was always going to be difficult. It has been quite inconsistent. I crashed in Faenza on my own and obviously didn’t score many points in that one.

It’s not been like 2018, for example, when I finished fourth in the series. I had one race where I didn’t score any points, and that was just because when I crashed I smashed the bike up by the other guys landing on it. I was a lot more consistent than I am now, but I was not as quick. It’s just building each year and that’s part of it. I’m trying to find speed, and I need to find that consistency. I crashed on the start today. There was nothing I could really do. It’s just one of those things. I’m just happy that I’m riding good. We’ll just see at the end.

I genuinely cannot remember if I’ve asked you about this in an interview or somewhere else, but where are we at with 2021? You were the subject of rumours at Faenza, but a lot of them were not true. Where are we at? Well, as much as you can say anyway?

It’s just the same as before. I’m talking with Yamaha – I want to stay loyal to the brand and that is a big goal of mine. I’m not just going to sway boats, just because there’s a different opportunity coming up. I’m really happy with the family I have around me. That is my priority to try and fix something. We are talking now. That’s common knowledge for everybody. There is nothing secret. There was a lot of rumours, which were not true. It shouldn’t be too long and we will see.