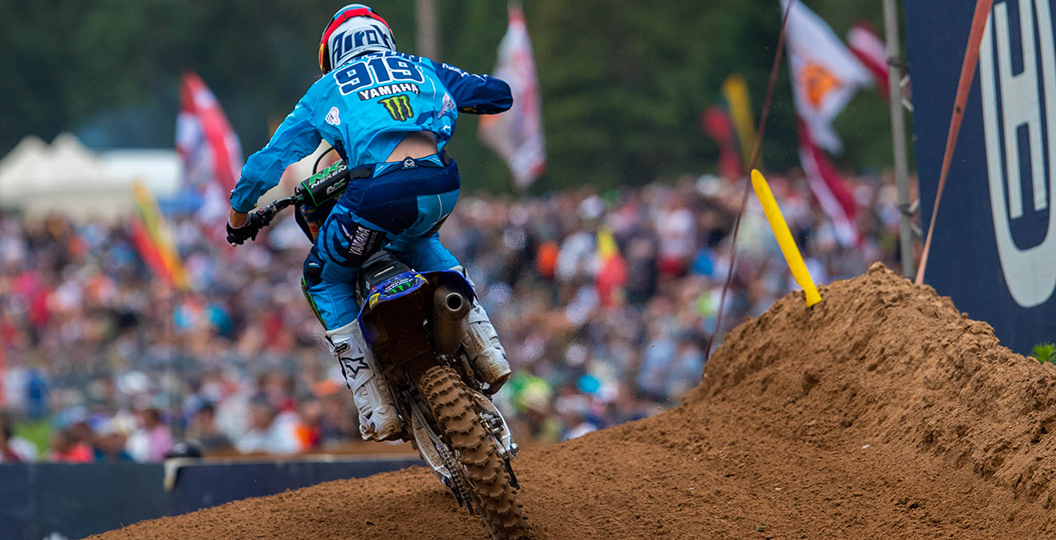 Ben Watson has quietly strung together a series of impressive rides over the last month, therefore putting his run of misfortune firmly in the rear-view mirror. The Grand Prix of Latvia was yet another reminder that it will not be long at all until he jumps up onto the box again. Was he feeling just as positive when round nine drew to a close? MX Vice editor Lewis Phillips caught up with the Monster Energy Kemea Yamaha rider on Sunday.

MX Vice: 4-4 on the day, which is solid and all of that. I think it is a step in the right direction. I am sure you wanted a podium, but I guess this is kind of a step towards that.

Ben Watson: Yeah. It has been a long time without really any results. Yesterday started off pretty good. I had a good start for once and was able to ride my own race to finish third. That was a good step. I was happy. Kind of confirmed if I get a good start that I can ride up there and then today… The start is a little bit unfair here, so when you qualify good you can turn around the first corner good. Yesterday was fine for me. In the first race I did not get a great start, but I was able to keep tight in the first corner and came out fifth or sixth.

I made kind of a solid first lap and got to third. I avoided one crash that claimed a few people, then I went from sixth to third and then back to fourth. Not bad, but my pace was not quite with the top guys. Then the guys behind me were not quite on my pace. I really had to race on my own once [Henry] Jacobi dropped out, so I finished there. Thirty seconds was the gap behind me and then I think it was around twenty to first place. It was really on my own. Then the second race I had a better start. I think if it was a normal start gate then I would have had a good gate, but, just because I am on the inside after qualifying yesterday, I would have got a good start even if I had a bad gate.

That was positive for me this weekend actually, the start. I had a little bit better race. The guys, they flattened almost the whole track. Almost all of the track was completely flat. When I came in after the sighting lap I was like, “What have they done?” We ride so technical all weekend, get the track good and then they go and flatten the whole thing for the second race. I was a little bit frustrated with that, because for me I want it as technical as possible. Then after the start I kind of rode my own race again.

I was not so good at the start. The track was so fast. It felt a little bit scary for me, so I was under a little bit of my potential. Then halfway through the race I started riding really nice. I came through as fourth again and kind of rode my own race in the end and felt a lot better. I kind of got into my groove, my flow and started to feel a little bit like my old self again. Overall, third yesterday and two fourths today. I have to be happy and realize that I need to just keep building slowly.

I just spoke to [Jorge] Prado and he said exactly the same thing. They flattened the track way too much. It was ridiculous. He said he came in after the sighting lap and said to his Dad that he did not know how he was going to win, because everyone would be going the same pace. I guess the qualifying race that it was a bit rougher and better though?

Yeah. Qualifying race was a lot rougher. They just made it a lot safer in the qualifying race. They left all the bumps and just did the knotty edges on the take-offs. How they should do it to make the racing good and safe is just leave the bumps to slow the track down, but then do the take-offs so that if you do get a little bit squirrelly you are not going to hit a jump completely sideways. That was good what they did there, but then they peaked every jump up so much that the tops were really thin.

Even after the sighting lap, the lines were there. The takeoffs were just not holding at all. After a few laps, it was really sketchy again through the rollers. It was unreal. We went out for the sighting lap in the second race and it was so strange. There were two or three corner sections that they had left, then the rest was completely flat. They just kind of scraped over it and did not exactly grade it properly, so towards the end of the race the old bumps were coming back quite quickly. Still, it was nothing to what it should be.

I think one of the sickest things I saw this weekend was in the qualifying race you were literally probably the only rider who could double out of the waves on the inside. There were a few MX2 guys trying it and they were either just clipping the top or going outside. Then even in the MXGP race, no one could really do it as consistent as you. Did you have something figured out there? Did you feel like you had it dialed perfect?

Not really, but normally that section is in favor for me. I have really long legs and I can work with the bike quite good in a section like that. In Argentina it is always the long roller section where I shine, let’s say. I don’t know. I think my long legs just come into an advantage and I can really just play with the bike. I did not feel like I had something special going on there, but I was able to just kind of stay quite consistent through there.

In the first race I did not have a good line. Although I was getting the section good, it was slower. Then towards the end of the race I changed it up and was getting it nicer and was on a faster line. I made a small mistake there in the first race, but that is where I should have really shined. It was good. I have to be happy that I have stayed on two wheels. You see in MXGP that there have been some crazy crashes yet again this weekend. I am happy to be heading to Germany.

Yes and no. When I get my start good, it is good. If make a small mistake, then it is not good. I have to be really, really precise, otherwise I am back. I am almost eighty kilos so, for me, if I shift a little bit too early then it dies down and the guys just swamp me, like you said in the second race. Qualifying, that was good. I had a real perfect start. It could not have gone much better.

If I was the weight of [Jorge] Prado, let’s say, I am sure I would have holeshot that easy. Then in first race I slipped the clutch way too much and was just too slow off the grid. I did not really jump, let’s say. In the second race I actually felt like I had quite a good start, but [Thomas Kjer] Olsen just got by towards the end of the straight. I was still able to turn good. The second-race start was pretty good.

I feel like this is definitely come good the last three rounds. France was obviously great. You could look at the results from Russia and say that was another so-so weekend, but if you actually look at it and where you came from on the start each time… Henry Jacobi was kind of in a similar position to you in each race and you kind of handled him pretty well and moved forward way more. That was another good one. This is definitely a good little run going.

Yeah, definitely. I am starting to feel a lot better now. I am not where I know I can be, or where I want to be, but I cannot ask for too much after the start of the season and how it has been going. I felt like I was in the corner a little bit and everything that could go wrong was going wrong for me. Things just completely out of my hands like riders more than two times crashing in front of me on a landing and me just hitting them with having absolutely nowhere to go. It was getting me down a little bit. My enthusiasm was not really where it normally is. Then I have just started slowly building and not giving up. I am coming back to where I know I can be, so I hope that I can just keep this momentum going and keep progressing each weekend.

Do we know if Henry Jacobi still wants to kill you? I was worried for you in the first race when he was behind you. Is that dead and buried now or has he still got an issue?

I was worried there as well.

I just have to show that I am also not scared of him. He has got a bit of a bad reputation in the paddock. Just one you have to be a little bit smarter with, because he is not shy to kill himself as well as taking you down.