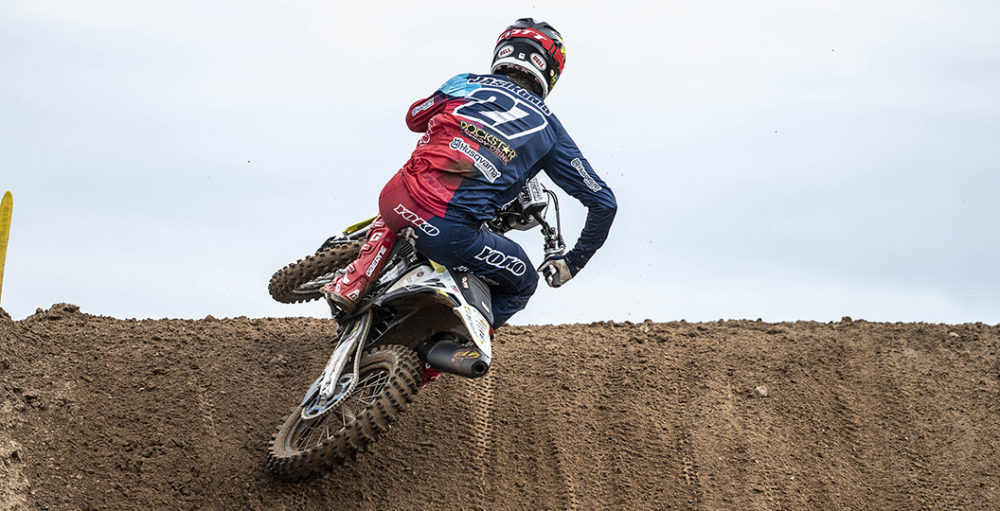 Arminas Jasikonis entered the history books on Wednesday afternoon, as he became a moto winner in the FIM Motocross World Championship. Jasikonis also delivered Rockstar Energy Husqvarna Factory Racing their first race win since May 2017 – that was a drought of 1173 days! Jasikonis also became the first Lithuanian to taste success in the Grand Prix series, so a lot happened! All of the above is discussed in the exclusive MX Vice interview below.

MX Vice: First of all, I always believed in you. Seriously though, your first moto win and obviously a big thing. You have had two qualifying wins in your life. How different did this feel?

Arminas Jasikonis: I think this was the third qualifying win.

Oh yeah, you were on pole. Still, you won two qualifying heats in your life. How different did the moto win feel to that?

Quite a bit difference. Qualifying win is still like the guys are not really going for it sometimes, so that is not too bad. For a win, everybody is hungry for that. It was a tough one, but for sure worth it.

That experience didn’t help you at all? It must have helped just having that experience of at least leading an MXGP race of some kind this year, right?

It helps of course, but the pressure that comes to your body even if you are fit is still quite tough. The guys just knocking back of the door, like Jeremy [Seewer] was all the time in the back and Tony [Cairoli] was there. It was a tight fight, but I didn’t make any major mistakes and didn’t allow them to even try to go for a pass.

You were chasing Jeffrey [Herlings] at the beginning and I think you were faster. You were definitely the same speed at least, but you could not get past him. I was wondering whether you blew up a little bit with your arms and stuff, just because your first win was right there. All very exciting. I just wondered if it maybe got to you a bit at that point?

To be honest, the pass on Tony was actually really good. I went around the outside but I almost went for two guys on the outside. I went so quick in that turn that I almost went for also Jeffrey in the same turn on the same lap. It just worked that I passed Tony, and then I followed Jeffrey for pretty much all the race. I had a plan in the end to try and go for it, but in the middle of the race I was just following and just doing my moto and then seeing what happens in the end.

Suddenly I saw the yellow flag quick and then I saw him lying down, so that was a big game changer. It just made me much easier to take that win. Those two last laps were tough, because also everybody went for a win. Even Jeremy wanted to take that. I just had to play it cool and do my lines, do my laps and that came in the end like finishing first. It was good.

Even this is interesting, because you have had the speed to win for a while now. I think in the past your race craft has let you down though. Was it maybe on your mind then not to go too fast too early? Rather than just thinking, “I’ve got to get in the lead now!” Maybe the full distance and race craft was on your mind?

Yeah. That is also a little bit playing a part, but I know that I am fit and I can for sure follow Jeffrey and all those guys. I know that my fitness for sure is not worse than them. This was the thing, but of course when you go in front somehow is extra pressure and that makes it extra heavy. Your arms feel ten kilos heavier and legs also. It’s not that easy, but I still felt good the whole moto with my fitness and everything. I know that I can start pushing in the beginning and keep on going until the end.

Jeremy was coming at the end, and he was really quick in the waves. Did you know that was where he was gaining time? Some laps he took a second out of you in the waves, and you are the one with the long legs.

I do not know, actually. It didn’t feel like he was really in back of me on the waves. I actually was also good. Maybe because he was inside of that turn and that made him a little bit of time? The rest, like the triple after the waves and the triple double, I think I was fast enough that he couldn’t pass me there, because at least I was really catching Jeffrey there. I never heard really his bike in back of me in that part. I just felt a little bit on other parts, but I was not really stressing around to change lines. I never saw his front wheel. I knew that if I hit my lines right, even they were maybe slower, that the line was good. I did that and I just kept hammering the same lines, because I knew they were working. I just didn’t change around.

A little bit bummed not to get on the podium? Obviously your first moto was a great ride from the back, but winning a moto and then not getting to stand on the podium… Does that kind of feel a bit odd?

Not really. I mean this moto win pays everything back. I had a podium and now the win. Now we have to put it together for the last one to bring everything together. I’m not so bummed. I took the win and this was my goal. I did my best. If the podium didn’t come, then it didn’t come. It means that it was just not going. I know that if Tony didn’t crash then maybe I would have been on the podium, but that’s a race and I know I did a really good day today. A bit unlucky with the crash, but otherwise it’s been a really good day.

You are a moto winner in MXGP. Can you believe it? Your path to this point isn’t the same as everyone else. You weren’t signed by Red Bull KTM nor did you come up through MX2. Just thinking that you have now won a moto in MXGP, that is quite cool.

I know. It’s a great thing, having one moto win. It’s a big thing. Also being the first Lithuanian to have a moto win and podium… Rewriting all history. This is big, even overall in the  complete MXGP paddock. It’s really good. We need to increase those numbers in the future for sure, so we will work hard and we know that we can do it. We have done it once already!