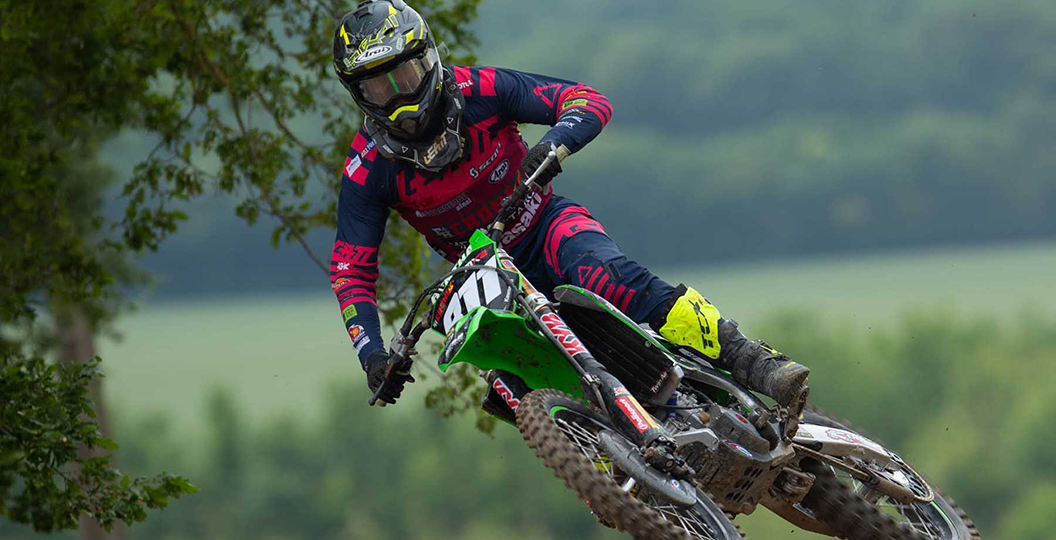 Adam Sterry has really taken some steps forward in recent weeks, hence why he was able to obtain a career-best overall result at the recent Grand Prix of France. Sterry had great starts, thanks to an interesting strategy, and held on for a sixth in each moto, despite the fact that St. Jean d’Angely is not his favourite stop on the calendar. How did he feel about his weekend? Lewis Phillips caught up with him on Sunday evening for this exclusive MX Vice interview.

MX Vice: Consistent day, which is different. We don’t get to say that a lot. No one crashed in front of you. There were no major talking points… It was just solid and that is exactly what you needed.

Adam Sterry: Yeah, like you said, it has been a while since someone did not crash in front of me on the first lap. Happy to do that. There was a problem with the gates. I don’t know how that is possible at the world championship, but they are stuttering as you saw in the 450F race. Yeah, the second race I almost got the holeshot. I thought I actually crossed the line first, so I thought I was coming up to get that Fox holeshot plate. I don’t know what happened, but the first race was again a good start. Second race even better start.

Like you said, two consistent rides. This, on paper, is my worst track if you would pick out of the calendar at the start of the year. Name your worst track, it would be this one. I felt like I struggled all weekend actually with my legs getting in the way. I don’t know whether it is because I have not ridden these conditions for a while or what, but it has never been my strong point. I felt like I struggled all weekend, but happy with the result. My best ever, I think. Fifth overall, so happy.

Your best ever? Seriously?

I think so, yeah. You are the stats, man. I have been sixth overall, but I don’t think I have been fifth.

You say it is not your favorite track. You didn’t feel it all weekend. Is that kind of better in a way, because you ride within yourself and then the mistakes do not happen? In the long run, it all comes good.

Kind of. I feel like the mistakes… Some have been on my part but that happens all the time in motocross. I just feel like I have been like a crash magnet. If someone has been crashing on the first lap, then I have always been involved. It was nice for that to not happen this weekend. I am not really, really happy with the result because it is what I expect from myself and I expect for me to be on the podium.

I know I can do it. I showed that this weekend, on my worst track, that if I get a good start and stay without crashing. That is an improvement. We are still early on in the season. We are a third of the way through. I am still looking to build and work hard. I am sure I have got more to give.

Starts have been good all year, but lately they have been really good. It feels like every single start you have been at least top five. Have you had any engine changes or gains in that department?

No, nothing. We just changed the gearing a little bit but, other than that, nothing. It is the same since Argentina. Since last year my starts needed to improve. When you are starting last, there’s no way to come forward to be in contention for a podium. That is what we really worked on. That’s a really important part of the race and it shows now that I can do it. Still a little bit behind. To be with [Jorge] Prado and [Tom] Vialle I need to be a lot lighter, but it is not possible.

I try my hardest and I found the gates jumping this weekend helped me a little bit. I put myself further back on the metal, because I knew they were going to move. When they moved, I just let the clutch go and I ended up timing it perfect both times. I don’t understand why more people didn’t do that, but I guess going to school did help a little bit.

Starting up front each time and consistently, have you had any major breakthroughs? Are you like, “Holy sh*t, they are doing that? That makes sense.” Just picking up these little things?

Not really. There are not really loads of lines to choose from. I guess it is easier to stay in a rhythm and you don’t get as tired when you are chewing stones all moto, like I have been doing. I feel like I’ve been shot by a shotgun the last few weekends by how much roost I have gotten. Just battered all over with bruises. It is nice to start at the front and be able to run that pace.

I want to improve my speed a little bit more and hang it out a little bit more. Like you said, I just kept within my limit. I did not make a mistake. That’s what I needed. I needed two solid results and that got me fifth overall and not far from the podium.

I said the same to Darian [Sanayei] last week. The clock is ticking on your MX2 days. With each race that passes it is another one crossed off. Are you starting to get a bit antsy to achieve what you want to achieve before you have to leave?

For sure, that’s always there. I actually listened to that podcast with Darian. Like you said, I am really worried about that. That obviously is big pressure on your shoulders to try and find a ride next year. We have not so many teams and so many riders. It is subconsciously on my mind, but if I think about it it’s only going to make me worse. I just try to enjoy this year, enjoy every race and try my hardest. That is all I can do. That’s the mindset I have gone with. Just try and stay injury-free is the most important part. We are doing a good job of that so far. Hopefully I can carry on doing that.

Last thing, on a scale of one to ten, how happy is Marc [de Reuver] with you at the moment?

I don’t know. That is something you’ll have to ask him. I guess happy.

Henry is not here I take it. Do you have any idea why he wanted to kill Ben [Watson] after time practice? Ben is gone, Henry is gone… I just want to know.

I don’t know. I was getting ready to referee it. I saw them on the track. Henry is my teammate, obviously, and Ben is a good friend of mine. When they pulled up for the practice starts, they started having a go at each other. I was getting excited, actually. I wanted to referee it. Ben got in his way on a fast lap, I think, from what I can gather. Henry does not really like that, as do most people. They were just speaking to each other. I am sure they’ll sort it out if they meet on the track again. Hopefully I’ll be there to watch it again.