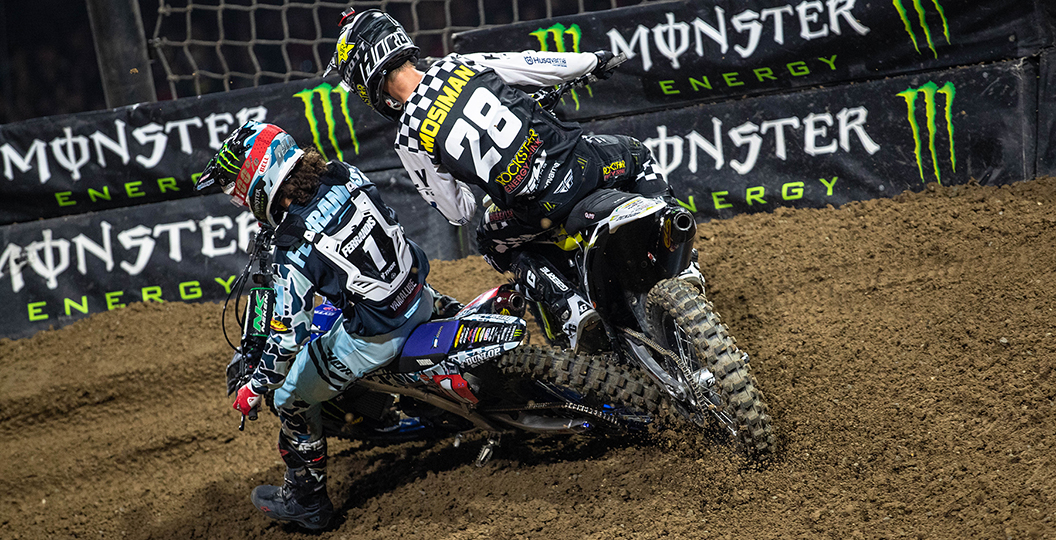 Michael Mosiman has arguably been the best of the rest in 250SX West thus far, as he has been right there but just a tick off of the big three. San Diego was another step in the right direction, however, as he led laps and was deep in the fight for a spot on the podium. Is Mosiman actually happy though? What is it going to take for him to hit another level? MX Vice editor Lewis Phillips caught up with #28 at Petco Park.

MX Vice: You Are back on track after last week, which was a disaster. Fourth is great. I get the sense that maybe you would have wanted a podium, but there is nothing wrong with what you did tonight.

Michael Mosiman: Yeah, absolutely. I’m certainly not satisfied with fourth. The way this one came… There’s a lot of positives to getting out front, leading laps and having speed. It was really good. I think we made a lot of progress in my bike in the past couple weeks. I’m really quite pleased with where we are at. Definitely looking for more. Definitely would have wanted the podium. I didn’t come off the track rejoicing. I came off the track like, “I feel like I should have been further forward.” It is what it is. That was fourth for the night.

Even when you were leading, I felt like that pace was coming naturally to you. It didn’t look like you were automatically going to get swallowed up or that it was in your head. It looked like you belonged at the very front. I’m guessing it felt natural for you to lead the way.

Yeah, absolutely. This is what I do for a living. This is my job. The guy who won the 450SX main, I train with him weekly. The same goes for Zach [Osborne], RJ [Hampshire] and Jason [Anderson]. We’ll do motos with these guys and I’ll have them breathing down my throat. You have got to stick your line. There’s confidence that you take from that and confidence you take from past weeks. I think just a general belief in yourself that you have to have for anyone to get to any top level of the sport.

Do you have a little bit of regret that after [Austin] Forkner passed you, you kind of dive-bombed him? Maybe you should have just sat back in second and played the game a little bit?

Yes. Do have regret on that one. It wasn’t so much of a “send it” move. That’s a move that worked for me earlier in the day on Justin Cooper in the heat race, but the thing I didn’t take into consideration so much is when Justin did it the rut was more chewed up whereas we had it really fresh there in the main. It was still early on in the race. He had so much more speed. He was railing around the thing. For me to meet him at the end, it’s way different than when Justin Cooper was just getting through the turn barely. It was a bad move. Regret there.

I’m guessing a little bit of a “send it” move came from the fact that it was Forkner as well. Where the hell does that beef come from? Did it start this year? Does it go back as far as last season? Where does that come from? It’s pretty intense. There’s a lot of beef there.

Yeah. I don’t know. He’s got a target, but the only reason why we don’t like him as much is because he’s so dang good. In amateurs, I got whooped by him so bad sometimes. There was other times where I gave it to him. He’s just so good. I think some of us are like, “What the heck?” He’s known to send it himself. You just kind of feel like that comes with it and he gives himself a little bit of a target. I talked to him today about last week, just because I said some stuff in an interview that I didn’t say to him in person. Men say it in person. They don’t say it behind their back, on social media or whatever. We talked about it. We are cool. I have huge respect for him. There is history there, and you can’t just erase that.

I guess it’s just one of those things that you want to send a bit of a message that this isn’t amateurs anymore. You are here. You are going to be a threat. Deal with it. It’s like, “Look at me like you look at Ferrandis or another guy.” That’s who you are now. You have proven that you are there and in the fight.

Yeah. That’s it. That’s all I want to do. I think I’ve earned my respect. Funny story. Ferrandis in Arizona in the second heat, he passed me in the turn after the whoops. I came down the start straight, had a good run, and I stuffed him in the next corner. Before the third main, because it was the Triple Crown, he came up to me and he was like, “Nice pass back. I wasn’t expecting that.” I was like, “Yeah, you weren’t expecting that! You should expect that, man.” I’ve been riding too timid. I need to get some aggression in me. You just earn your respect. It’s the way it works.

Watching you through the first six rounds, it seems like everything is there. Starts are good and raw speed is there. It doesn’t look like there is necessarily something you are really struggling with so, from that point of view, is it frustrating that you are not on the box each week? Do you feel like there is one thing that you need to fix?

I’d say whoops have been a weakness for me since I turned pro, really. I think at some points tonight they were my strength. I’m pretty good. My bike I think is really good right now. My starts are sweet. I don’t think that’s going anywhere anytime soon. Really stoked on that. Is there any real thing that’s holding me back? I think it’s just a matter of doing it. I said that to someone before the season even started. The confidence that I need is going to come from doing it. You can’t just manufacture that.