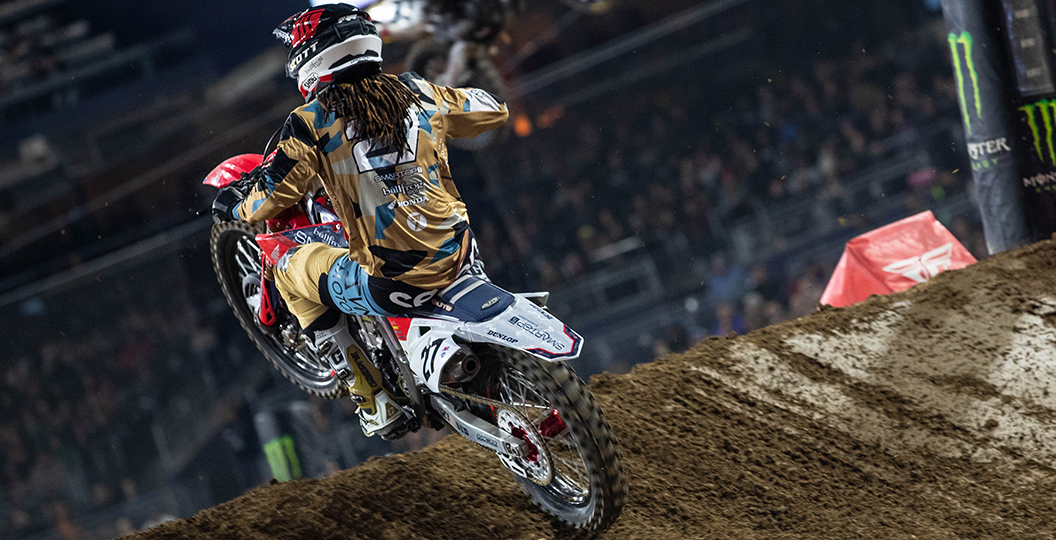 Malcolm Stewart has arguably been the most consistent rider through the first six rounds of 2020 Monster Energy Supercross, as he has finished between sixth and tenth in every main event thus far. San Diego was arguably his toughest outing, despite the fact that there were positives like his starts, and Stewart reflected on that in this MX Vice interview from Petco Park. There is a lot to take from this chat that was first published as a post-race podcast.

MX Vice: You have definitely got this consistency thing down. Very similar to the first five rounds for you, but there is nothing wrong with that. You are getting points on the board and actually looking pretty good in the standings.

Malcolm Stewart: Yeah, so far we have kept it pretty even. Top ten at every round. It was just one of those races. I think I definitely could have had a better result and showed a little bit more potential, but the track was tough. I think the whole talk around the town is the whoops. Everybody was kind of struggling through the whoops. At one point everybody was getting close to jumping through the whoops in the second set. It’s a part of racing. The track was a little tough. We will just keep the ball rolling. How mad can I really be? I haven’t finished outside of the top ten since the beginning of the season.

I’m just really looking forward to Tampa. It should be a good race. I get to go home, get to see my family and stuff. I think I’m a little homesick to be honest with you. I’ve been out here since August but I can’t sit here and say that it hasn’t worked. All the hard work has been paying off. We have been keeping it inside the top ten – that’s our goal. Obviously we for sure know we have the potential to be in the top five, on the podium or even win one of these things.

You cannot sit here and say they ain’t out, because the class is stacked. You just look down the field. If you just go there and look who has finished inside the top fifteen then you are just like, “Wow.” Every single guy here has won a race or won a past championship in the 250 class or whatever. It’s a very, very stacked class. The fact that we are finishing inside the top ten is like a win for us.

Yeah. I’m not even going to lie. I was struggling through the whoops. I think everybody here was struggling through the whoops. It just wasn’t the best. That’s just part of it. Again, it’s called racing. We have got more racing to go. We are about to be six rounds in, so now I’m kind of curious because now you have got the 250SX East boys that are coming.

I’m kind of curious to see how the Lites class is going to be on the east coast. I know there are some pretty big bangers. It’s fun. Now we get to hit some of the east coast tracks and the domes. We’ll get some more bowl corners. Traction will be a little bit better and a little bit more forgiving. The track was hard-pack. It was literally like slippery concrete for us. Like I said – I’ll say it again – it’s a part of racing.

If one thing is good, it seems like your starts have gotten a bit better. They seem to be coming along a little bit and that is going to lead to better results.

Yeah. When you start up front you will finish a lot better up there. I actually had more tear-offs this time going around. I actually didn’t run out! I didn’t use all of them. Usually I use all of them in the first couple laps, because I am starting from the back. It was good to have a little bit of clean air. I was having fun, man. I’m just having fun. Every round I’m having fun. Just enjoying myself. I have been working on the starts quite a bit. Like you just said, they are slowly getting better. We are going to get one of these holeshots here soon and keep going. It’s a long season. I’m enjoying myself.

Last thing. I get a sense that six rounds in you haven’t actually ridden over your limit at all. It always looks like you are within yourself and, if you wanted to, you could unleash this little bit extra, but I guess you want to stay consistent and you want to stay in the hunt.

Yeah. Of course, at one point in time I know I can unleash it.

We saw it in the heat when you went through [Justin] Barcia and [Dean] Wilson in the whoops.

Yeah. I feel like I can unleash it for sure. It’s just sometimes you have got to take a step back and realise you are just trying to be consistent. It doesn’t do any good to have one good result then the next weekend you are looking down the list and you are in eighteenth. At the end of the day, if we stay inside of the top ten then that is what the real goal is at the end of the season: Results. You stay from there.

Again, we struggled a little bit with chassis set-up tonight. I think we have been struggling a little bit for the last couple weeks, but we are slowly getting it figured out. I think maybe when we go back east it will be a little bit more forgiving. The east-coast dirt will be a little bit better. My best set-up was in St. Louis and that was because it was east coast dirt. Looking forward to going back home and being back. It should be good. We’ll do some testing again this week, get some more starts and have at it.